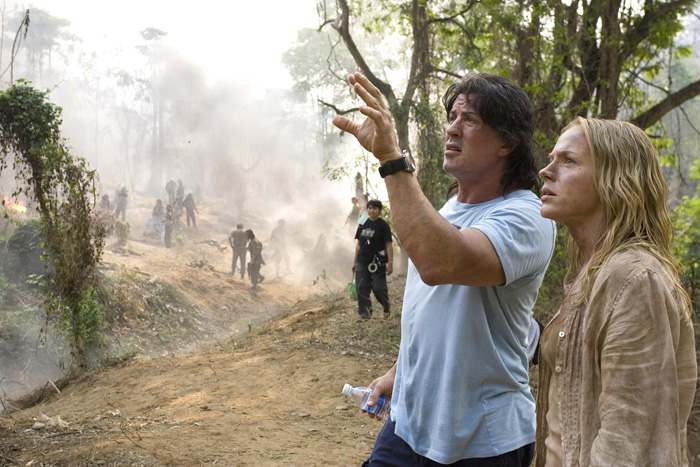 It has been 20 years since John Rambo (Sylvester Stallone) staged a one-man rescue mission to save his old friend and mentor, Colonel Trautman (Richard Crenna), from the evil Soviets invading Afghanistan. Now, living in Thailand, Rambo is called upon once again, this time to save a group of humanitarian workers trapped in civil war-torn Burma in an all new Rambo.”

Well, I shouldn’t say new. Director Sylvester Stallone co-wrote this latest Rambo script (Ken McPherson is credited, too) and brings us more of the same and does for the “Rambo” franchise what he did for “Rocky” with Rocky Balboa.” This is not to say that he achieves the same level of sentimentality that he did in the latter film. But, he does achieve the same enormous body count that he tallied in “Rambo II and III.” And that is just what you get with this latest installment. The difference is the special effects that show people being stabbed, shot, cut in half and, generally, blown to hell are way better now than they were two decades ago. Rambo” (IV) is simplicity itself in storytelling. Rambo lives a solitary, quiet life in Thailand catching dangerous cobras and pythons for sale. A group of Christian mercenaries and medicos approach him to transport their crew up river into civil war-riddled Burma to bring medical supplies and schoolbooks. Reluctantly, Rambo agrees but must kill a group of heavily armed river pirates in the process. Taking a life is never right!” declares head humanitarian Michael Burnett (Paul Schulze). Right there, we know where this is going – and it goes there in spades. The missionaries are, of course, taken captive by the evil soldiers - who play games like throwing landmines into a rice paddy and forcing innocent peasants to run across or die. Of course, they die, horribly, anyway. Arthur Marsh (Ken Howard), the man who sent the mission to Burma, approaches Rambo to transport a rescue team of mercenaries to find the missing medicos. He, again, reluctantly agrees. This brings us to the last 45 minutes of “Rambo” and it is the stuff made for the 18 to 24 male video game-playing demographic the movie aims squarely at. I would love to find out what the estimated body count runs – someone let me know, please – because it mounts, nonstop, for the last half of the film. We’re not looking for deep, complex character development here. Good guys are good guys, bad guys are really bad guys (murder, rape, pillage and burning are part of their daily routine) and the not good/not bad guys are mercs (who are really good guys because they kill bad guys). And there is a whole lot of killing bad guys. Rambo, as you can guess, is the goodest of the good guys. This is for the fans of the original “Rambos” (though maybe not fans of the first, “First Blood”) and the sons of those fans. You get what you pay for and here you get mayhem and lots of it. I won’t go into any detail but DO NOT go see this if you are the least bit squeamish. “Rambo” is what it is and, like “Rocky Balboa,” does it with the spirit of its predecessors.