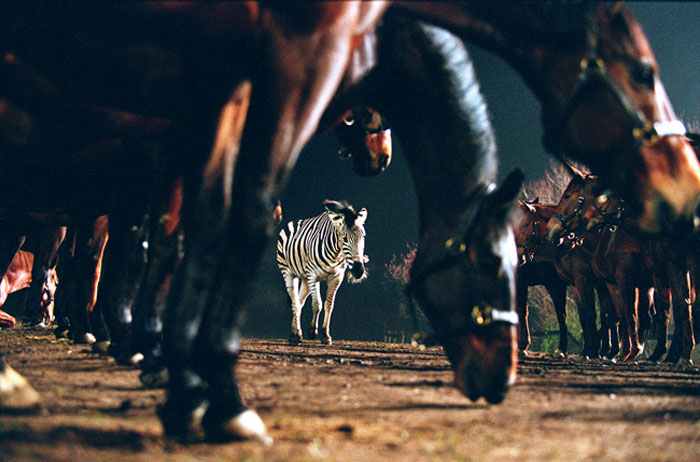 During a violent thunderstorm, a baby zebra (voice of Frankie Muniz) is accidentally left behind by a traveling circus. Horse-farmer Nolan Walsh (Bruce Greenwood) finds the little colt on the rain-swept road and takes him home to his daughter, Channing (Hayden Panettiere). She dubs him Stripes and brings him into the farm’s animal society. There is a strong spirit of adventure within the feisty little animal and, with the help of the rest of the barnyard critters, he aspires to run with the big guys and win the prestigious Kentucky Open in “Racing Stripes.”

You can see that the filmmakers have their sights set on the success and charm of the wonderful 1995 film, Babe,” with their foray into the world of talking animals. They take a more child-oriented path with Racing Stripes” by concentrating on the kind of humor that would appeal to the pre-adolescent audience that is the film’s target. Things take a routine path as we are presented with a traveling circus coping with a breakdown during a dark and stormy night. Although the roadies are admonished to not leave a thing behind, one large box, containing the baby zebra, is forgotten. Nolan, trying to get home through the driving rain, almost hits the little critter and bundles him into his truck with the intent of turning the babe over to the authorities. That is until his daughter, Channing (Hayden Panettiere), spots the diminutive quadruped, names him Stripes and begs her dad to keep him. Reluctantly, Nolan agrees. Three years later, Stripes is all grown up and notices something strange and exciting. Next door to the Walsh Farm is the Dalrymple Estates, a prestigious thoroughbred training center where Nolan once worked before his wife’s tragic death in a riding accident. Stripes sees the racetrack and is irrevocably bitten by the racing bug. The rest of the barnyard creatures join in to help, led by a cantankerous Shetland pony Tucker (voice of Dustin Hoffman), a kindly nanny goat called Franny (voice of Whoopi Goldberg), a not too bright rooster named Reggie (voice of Jeff Foxworthy) and a pelican called Goose (voice of Joe Pantoliano) who is on the lam from his connected “family” in New Jersey. Racing Stripes” is firmly entrenched in the kids sector of movie entertainment with its bevy of talking animals – well voiced across the board – doo-doo humor and a pair of fast talking horse flies, Buzz and Scuzz (voices of Steve Harvey and David Spade). But, the brisk pacing, entertaining, oft adult-geared humor make this the kind of film the parents won’t mind seeing. It is not of the sophisticated level of “Babe” but there is enough mature humor to keep mom and dad amused while the kids roar over the pooh-pooh antics of Buzz and Scuzz. Techs are first rate with the animatronics and CGI effects giving believable voice and movement to the talking animals. There is also a line drawn between humans and animals as the farm critters freely talk amongst themselves but not in front of people. As such, there are two distinct stories going on – one about the little zebra who could; the other about an overly protective father who, eventually, must come to grips with his tragic past and set his smart and capable daughter free to do what she loves - riding. This latter plot line will have more resonance for the older kids and adults in the audience. The youngsters will be content with the bathroom humor, poopie jokes, cute animals and Buzz and Scuzz. While Frankie Muniz is the “star” voice of the animal cast, Dustin Hoffman and Whoopi Goldberg help flesh things out considerably with their vocal delivery and humor. Joe Pantoliano, as the wise guy Goose, is given many, many cliché lines from a plethora of gangster films but is still able to put an impertinent spin on his feathered character. Jeff Foxworthy does a serviceable job as the none-to-bright Reggie. Mandy Moore voices Stripes’s love interest, a pretty jumper named Sandy, who helps the single-minded zebra achieve racing success. Snoop Dog is wasted as the always-sleeping bloodhound, Lightning, and could have been dropped without notice. Usually, in a kids’ film with talking animals as the focus, the adult cast tends to be overshadowed by lovable critters and copious special F/X. Here, the human characters, led by Bruce Greenwood in a fully developed role as a man who suffered great loss and fears for his daughter, equate themselves well without competing with the non-human creatures. Hayden Panettiere (recall her as the feisty mini-coach in Remember the Titans), as Channing, also comes across as a believable young lady who loves her African equine companion, Stripes. M. Emmet Walsh provides the colorful character of Woodzie, a racetrack tout who made a tidy sum betting on Nolan’s trained thoroughbreds and is ready and willing to financially support Stripes and Channing’s quest to win the Kentucky Open. Wendy Malick gives a caricature performance (well suited to the role) as wealthy and arrogant Clara Dalrymple, Stripes’s nemesis. Techs are extremely well done for a children’s movie with South African locations taking the place of the rolling hills of Kentucky. The creation of the slightly dilapidated Walsh Farm and the opulent Dalrymple Estates, built from scratch, are believably rendered. Lensing, by David Eggby, helps to make the race sequences exciting and realistic – which helps a lot as you watch the chubby butted little zebra keeping up with the thoroughbreds. The screenplay by David F. Schmidt, from the story by Schmidt, Steven P. Wegner, Kirk Demicco and helmer Frederick Du Chau, is pretty routine and by the numbers. There is nothing really unexpected going on but the thoughtful writing and likable cast of characters, both human and non-human, make it solid entertainment nonetheless, especially for the youngsters. Racing Stripes” may not attain the worldwide acclaim that its predecessor, “Babe,” had achieved but that is not a bad thing. It succeeds in thoroughly entertaining its target audience while being easy on the eyes and minds of the escorting adults.