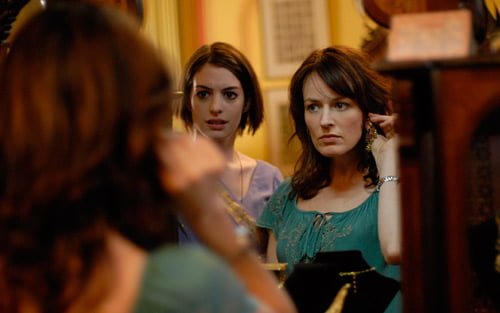 Kym (Anne Hathaway) has been in and out of rehab for nearly 10 years (currently it is in). She waits, impatiently chain smoking, for her father to pick her up and take her home to a very special family gathering. She is none too happy, though, with the prospect of being a part of “Rachel Getting Married.”

Throughout her teenaged years, Kym Buchman (Anne Hathaway, "The Devil Wears Prada") has abused every kind of drug out there, but her timing undergoing rehab couldn't be better as she's being released just in time to see older sister "Rachel Getting Married." Director Jonathan Demme ("The Silence of the Lambs," "Neil Young: Heart of Gold") has made a movie (written by Jenny Lumet, daughter of director Sidney) about family and friends with his actual family and friends and has made the wedding movie to end all wedding movies. Anchored by a revelatory performance by Anne Hathaway as a little-girl-lost hiding behind an abrasive narcissist, "Rachel Getting Married," with its organic soundtrack and 'you-are-there' improvised handheld camerawork, is almost a new form of filmmaking. From the onset, Rachel's personality dominates. Picked up by dad Paul (Bill Irwin, "Dark Matter," "Across the Universe") and stepmother Carol (Anna Deavere Smith, "The Human Stain," "The Kingdom"), Rachel acts like a rock star, demanding a soft drink from a soda fountain, constantly lighting up and airily noting she'll handle her bags as dad struggles with them in her wake. But as she approaches and enters the family homestead, it's also clear that she feels like an outsider and her brash manner is her attempt to push her way in. Rachel wends her way upstairs and visits childhood bedrooms as funereal music, performed downstairs by wedding musicians (and composers) Zafer Tawil and Donald Harrison Jr., wafts throughout the house. Rachel, who sports dark eye makeup and a ragged black bob, reflects in her purple and black bedroom before finding Rachel (Rosemarie DeWitt, "Cinderella Man") in a squeal of girlish welcome that is not extended by Rachel's best friend Emma (Demme family friend and filmmaker Anisa George) who obviously resents Kym's presence (and has the face of a pinched WASP who smells something bad). Sarcasm turns combative when Kym discovers Rachel has chosen Emma as her maid of honor. Kym needs to check in at a rehab center and bikes it when dad refuses her the car. At a meeting, she notes Kieran (Mather Zickel, "Diggers," "Balls of Fury"), who'll surprise us at that night's rehearsal dinner when he appears as Sidney's (Tunde Adebimpe, "Jump Tomorrow") best man. A clandestine (and sexual) bond is forged between the two recovering addicts, but Kieran knows how to fit in. As the extended family, a United Nations of Connecticut Buchmans, African American groom's family, assorted bohemian musician types, and Rachel and Kym's semi-estranged mother Abby (Debra Winger, "Shadowlands," "Eulogy") and her silent partner Andrew (Jerome LePage, "Analyze That"), begin toasting the betrothed in moments comic and sentimental, tension mounts waiting for the train wreck that will be Kym's moment and she does not disappoint. This first climactic moment opens the door to examine the roots of family dysfunction and a historical tragedy which, surprisingly, do not all lie at Kym's feet. Rachel proves a history of resentment, announcing 'I'm pregnant!' in the middle of Kym's search for truth, deflecting attention back onto herself and when Kym runs off to mom, the result is explosive. Dad, the peacekeeper, barely hangs on as old wounds are recut. Lumet knows how to work catharsis and she follows the operatic events of the day before the wedding with a wedding that is a true celebration, an interracial couple uniting in an Indian themed wedding complete with Brazilian dancers and Robyn Hitchcock and Sister Carol East as entertainment (watch for indie producer/director Roger Corman as a video camera wielding guest). And yet, the previous day's battles still echo - in the way Rachel seeks absolution in her wedding vows, in the way mom sits apart only interacting with the family dog, in the way Kym quietly floats a votive candle onto the family swimming pool. Demme and cinematographer Declan Quinn ("Vanity Fair," "The Lucky Ones") set out to make the 'world's best looking home movie' and they've succeeded, their guerilla shooting style inserting the audience right into the action - you'll feel like a guest at this wedding. Even more inspired is the use of the visiting wedding musicians (Buchman pere and groom are in the industry) to lay down the original score - the whole film is a musical celebration (Demme's son is even the wedding guitarist). Production design provides a rich history within the Buchman home, nicely contrasted the more starkly modern cube where Rachel and Kym's mother now lives. Demme's direction of his huge ensemble cast seems effortless but is flawless. As good as a title as "Rachel Getting Married" is, it has the misfortune of recalling last year's similarly themed "Margot at the Wedding," but this is no bridesmaid - it's the whole wedding party.

Jonathan Demme puts together a fine, ensemble family drama that is deeply veined with dark, funny humor. Anne Hathaway steps out of her usual screen personae and gives confessed addict Kym an acerbic wit, a two-edged sword that she uses liberally on others as well as herself. Rosemary DeWitt is an excellent foil to Kym as sister Rachel, showing the love, hate and compassion that only siblings can display toward each other. The huge supporting cast is peopled with good actors who can make their characters real people. Notable amongst this ensemble are Bill Irwin and Debra Winger as the girls estranged mom and dad. The screenplay, by first timer Jenny Lumet (daughter of the late, great Sidney), is uneven, often clunky with its rainbow coalition sentimentality as multiracial family and friends gather for the titular event. For example, during the rehearsal dinner everyone makes a speech honoring the soon-to-be wed couple. This would not be a problem if a sample of the honorariums were shown. But, the script calls for everyone in the room to toast the happy couple and it drones on interminably, something the director should have reigned in. There are a couple more of these long, lagging sequences, too. That being said, the newcomer scribe does have a flair for individual dialog and the interactions between the sisters, especially, ring true. Techs are solid all around with Declan Quinn’s first rate lensing making up for his recent, murky “The Lucky Ones.” The score, by Donald Harrison Jr. and Zafer Tawil, integrates the preparations for the big event with the wedding musicians providing background tunes throughout. Demme’s direction, except for the indulgences mentioned above, shows the expertise fitting the Oscar winner (for “The Silence of the Lambs”). Funny, pained, happy, sad, nervous, dramatic and comical, “Rachel Getting Married” has something for everyone. A mature movie that will appeal to mature people.