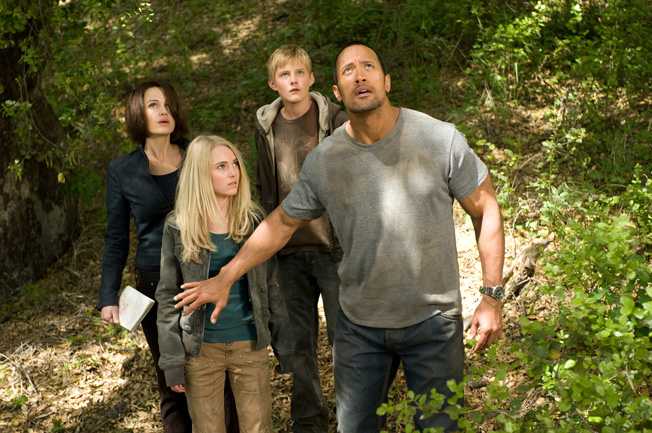 Jack Bruno (Dwayne Johnson, "The Game Plan") is an ex-con trying to play it straight working as a Las Vegas cab driver when one fateful day twoes far will change everything. Jack doesn't realize dropping off attractive astrophysicist Dr. Alex Friedman (Carla Gugino, "Watchmen") at a UFO convention will have bearing in his future, but from the minute young blonde siblings Sara (AnnaSophia Robb, "Because of Winn-Dixie," "Sleepwalking") and Seth (Alexander Ludwig," The Seeker: The Dark Is Rising") he's on the ride of his life, one that will lead to a "Race to Witch Mountain."

Director Andy Fickman ("She's the Man") took Disney's predictable comedy "The Game Plan" and, aided by The Rock's considerable charisma, made it into something better than it should have been. Now, with an update to Disney classic "Escape to Witch Mountain," Fickman delivers a numbing, pedestrian outing. It looks cheesy too. After some vague threats from a couple of goons, Jack begins his day with two kids appearing in his cab with a wad of cash. Speaking in clipped, awkward English, they ask Jack to take them out into the desert. Jack concedes, but his radar is up. When they're tailed by three black vehicles, he assumes its his old cronies calling, but in reality it is the Department of Defense's Henry Burke (Ciarán Hinds, "In Bruges," "Stop-Loss"). With the help of his new friends, he out maneuvers them and delivers Sara and Seth to a dilapidated old house in the middle of nowhere, but a sense of responsibility for the two kids makes him follow them. Hidden in the house is a secret passage to a strange, verdant world populated by fleshy pods, one of which holds what Sara and Seth are looking for. Unfortunately, they're being tracked by a Siphon, an extraterrestrial terminator. At least now Jack believes his inadvertent charges are really the aliens they said they were. And so, the big bad government (this film's a year too late) wants the kids to study them (that old chestnut) but the device they've got will save humankind by reversing the ecological problems on their own planet thus thwarting their military's plans to invade Earth. Jack and the kids connect with Dr. Alex to get the kids back to their ship which the U.S. Government has hidden in a secret facility in Witch Mountain. Robb is a dependable young actress and she's not the problem here. Neither is Ludwig as her less trusting brother. But there's not enough leeway in this script (from the writers of "Bedtime Stories" and "Live Free or Die Hard!") for Johnson to inject any charm and Gugino's adolescent behavior is not becoming an astrophysicist. Hinds is a normally a thoughtful actor, but he's an automatron here, nor do his underlings bring anything to the table. In fact, it's a bit of a head scratcher why the filmmakers even bothered hiring relatively 'name' actors like Tom Everett Scott ("That Thing You Do!") and Chris Marquette ("Alpha Dog," "Fanboys") to play them. More fun is veteran filmmaker Gary Marshall as a charlatan convention colleague of Friedman's. Kim Richards, child star of "Escape to Witch Mountain," injects more warmth and personality into her one scene as a helpful waitress than can be found in the rest of the film. This is the kind of movie that will have you looking at the chiseled out rock of a mountain's interior and thinking about painted Styrofoam. A scene of a massive train derailment is conveyed via bunged-up editing and a bunch of sparks. The tween target audience was present at the promotional screening I attended, but I only noticed one, very nerdy little girl laughing as if proving her intelligence by what the rest of us didn't get. "Race to Witch Mountain" is product, pure and simple, with no effort to nourish or entertain. It is a joyless experience to endure it.