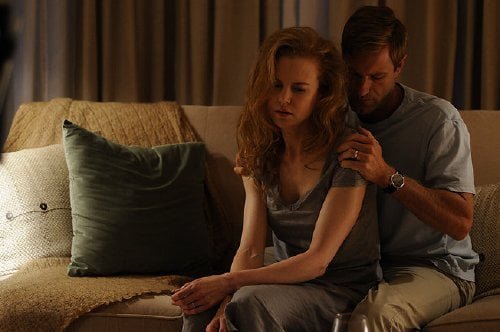 Becca (Nicole Kidman) and Howie (Aaron Eckhart) Corbett had the perfect life and adored their little boy, Danny. That is until, one day, the boy chased his pet dog across a busy street and he was struck by a car and killed. Eight months later, the couple has grown apart with Howie finding solace in his group grief counseling sessions which Becca eschews and refuses to attend. Instead, she begins to follow the teenager who was driving the car on that fatal day and seeks his company. Things will quickly spin out of control for the Corbetts as they go down a “Rabbit Hole.”

After their young son Danny is killed, Becca (Nicole Kidman) and Howie's (Aaron Eckhart, "The Dark Knight") different ways of dealing with their grief takes a heavy toll on their marriage. Howie surrounds himself with memories while Becca seeks to eradicate Danny's presence and so, naturally, Howie finds himself drawn to Gaby (Sandra Oh, "Sideways," "Ramona and Beezus"), a woman with eight years in a parental survivor's support group. Becca's way is more surprising, bonding with the high school senior, Jason (Miles Teller, making his feature film debut), who accidentally hit and killed her son. Jason's found an outlet in art, and Becca is tremendously touched by his handmade comic book, "Rabbit Hole." Director John Cameron Mitchell ("Hedwig and the Angry Inch," "Shortbus") sure is proving himself not only an eclectic talent but one who has solid filmmaking chops and the wisdom not to let himself be pigeon-holed. This heartfelt family drama is a return to form for Nicole Kidman, but it is Aaron Eckhart who really impresses as a sad dad stretching every which way to also support and find comfort with his emotionally closed down wife. Screenwriter David Lindsay-Abaire ("Robots," "Inkheart"), adapting his own play, opens with a metaphor. The well meaning Peg (Patricia Kalember), the Corbetts' neighbor, approaches Becca as she plants annuals to invite them for dinner and inadvertently steps on one of the young plants, crushing it. It's an accident which Becca pardons, but she does not accept the offer. When she's called from her perfect suburban Colonial life in the middle of the night, we meet Izzy (Tammy Blanchard, "The Good Shepherd"), Becca's wild sister who needs bailed out because of a bar fight. She seems to come from another world. She's also afraid to tell he sister that she's pregnant with her musician boyfriend Auggie (Giancarlo Esposito, AMC's 'Breaking Bad'). Little by little, the filmmakers fill in the blanks. When Auggie greets Becca outside her mother's home, her tells her not to be alarmed by the dog. 'It's my dog,' Becca informs him and she circles around it. There is the occasional cut to hands creating a cutout artwork, whose author and meaning is gradually revealed. Becca's reluctance to be comforted by her mother, Nat (Dianne Wiest, "Edward Scissorhands," HBO's 'In Treatment'), has a surprising source and their eventual communion in grief is one of the film's funniest scenes. This is a complex bit of writing that rarely rings false. But Becca's journey is only part of the picture. We see her and Howie attend a support group, where another couple, one revealed to *eight year* veterans, tries to befriend them. Howie is open, but Becca is typically closed off and rejects the group entirely when she embarrasses herself with a sarcastic retort to a new couple's use of a comforting cliche. In her absence, Howie grows closer to Gaby, whose husband leaves her for her inability to move on. It is Becca he wants back, but their every move is at odds, he trying to cling onto memories evaporating in her erasure. When he eventually agrees to put their house on the market in an attempt to save their marriage, things are finally forced into the open. Ironically, Becca's emotional frostiness seems tailor made for the ice queen Kidman has reflected of late, but she hasn't appeared so natural on screen in years. She portrays grief as a tightly held anger that bursts forth whenever someone prods. Her character's stalking of and reaching out to the young man who hit her son is the one plot line which stands on shaky ground, an unnatural seeming friendship, but Kidman plays the stalking aspect well. Newcomer Miles Teller is also tremendously sympathetic in the role. Aaron Eckhart, though, is tasked with a huge emotional arc, suppressing his own, privately indulged grief to reconnect into his marriage, reacting to rejection in a myriad of ways. It's a deeply plugged in performance. Wiest is pushy and perplexed in that maternal way, a mother gently trying to nudge her way in. Oh is funny and supportive yet lost. Blanchard, while fine in the role, looks so little like Kidman it is difficult to believe they are sisters, a contrast as sharp as Becca's 'Better Homes and Garden' lifestyle to her blue collar roots. "Rabbit Hole" is the most complex and moving portrait of parental grief and its strain on a marriage, and yet it's never a downer. The film's titular metaphor may be too literally worked into the story, but it is done with moments of grace and power. Aaron Eckhart gives his best performance to date.

A film that takes a look into the tragedy of a couple losing a beloved child is not what I would normally seek out as entertainment. “Rabbit Hole,” in the hands of talented director John Cameron Mitchell (“Hedwig and the Angry Inch,” “Shortbus”), is an earnest look at a couple’s coping with their heartbreaking loss and how their marriage suffers from it. With a fine cast in hand, Mitchell gives us a solid character study of Becca and Howie and how each deals with their grief. Aaron Eckhart’s Howie most visibly shows the sadness of a parent outliving their child. He needs his support group to see that he is not alone in his loss. However, Becca openly disdains the group, putting up a tough front and dropping out early on. She begins to lead a secret life as she follows Jason (Miles Teller), the driver who struck Danny down. They begin a cathartic friendship, for her to close the circle of loss and grief, for him his guilt assuaged his over the accident and he puts his heart and mind into creating a graphic story as a gift for Becca. Howie, though, is not ready to forgive and forget and their marriage will suffer for it. The story by David Lindsay-Abaire, adapted from his play, is not just about a couple losing their child. There is also Becca’s mother, Nat (Dianne Wiest), and wayward sister, Izzy (Tammy Blanchard). Becca has issues with her mother, thinking that Nat cannot understand the depth of her loss. Nat, though, lost a grown son to drugs and death and understands exactly. This part of the family drama feels tacked and is a distraction from the real drama unfolding. Sandra Oh plays another grieving parent that Howie turns to for comfort but this does not go anywhere. Mitchell is an interesting filmmaker and “Rabbit Hole” is very different than his two earlier works. No one will accuse the director of being anything less than eclectic. Unlike his earlier works, though, he turns the writing task over to the play’s author, Lindsay-Abaire, making “Rabbit Hole” a hired gun kind of film.