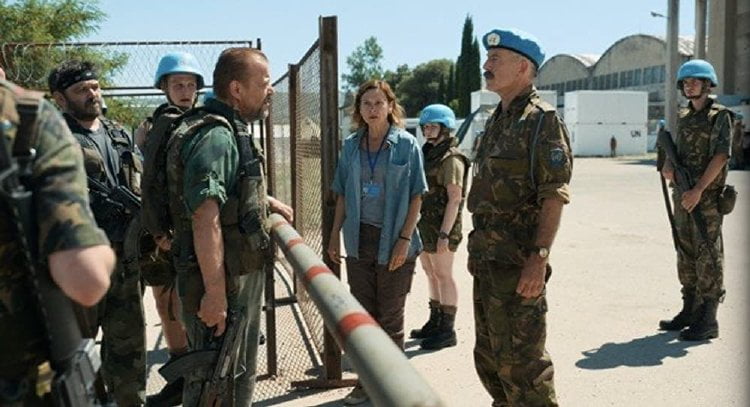 As the Bosnian war comes to a close in July of 1995, Aida Selmanagic (Jasna Djuricic) works as a UN translator in Srebrenica, a small town whose citizens are trying to take shelter in its already over crowded UN camp.  Assured by the UN’s Colonel Karremans (Johan Heldenbergh) that if Serbian forces approach, 40 NATO jets are on standby to attack, the Bosnians are nonetheless left defenseless while Aida tries to use her position to protect her husband Nihad (Izudin Bajrović, portraying a gentle man in a violent situation) and sons Sejo (Dino Barjović) and Hamdija (Boris Ler) in “Quo Vadis, Aida?”

The Bosnian submission for the International Film Oscar from writer/director Jasmila Zbanic ("Grbavica: The Land of My Dreams") is far and away the most powerful of the eleven of the fifteen shortlisted films we have seen to date.  Featuring a searing performance from Djuricic, whose reasonable hope giving way to mounting helplessness shrouds the film in unbearable tension, “Quo Vadis, Aida?” is like watching a horrific accident we are powerless to stop.  Zbanic caps off her masterpiece with an emotionally devastating coda illustrating how even peace can be hell on earth for surviving Bosnians.

After hearing that her family has joined others escaping to the woods, Aida climbs up upon a platform at the camp’s fence to survey the crowd and its vastness is overwhelming, reminiscent of the Battle of Atlanta casualties scene in “Gone with the Wind.”  While her position and bullhorn allow her family to make it through and up to the gate, UN soldiers refuse to allow her a favor, citing the unfairness.  Thinking and acting quickly, Aida secures a position for her husband, a fellow teacher, to negotiate with Serbian General Ratko Mladic (Boris Isakovic).  Mladic, followed everywhere by a videographer, has just shot a video declaring the town of Srebrenica, cleared by his tanks and machine guns, a ‘gift to the Serbian people.’ Karremans, his former promise having been proved worthless, attempts to escalate, frustrated when he is told the entire chain of command above him is on vacation.  Mladic’s ‘negotiations’ include emasculating Colonel Karremans by ignoring him while giving Srebrenica’s representatives the option to stay or go, the former choice an obvious death sentence to all but the naively hopeful Nihad.

Buses are offered to transport the Bosnians out of the area, but the Serbs insist on maintaining control of them.  A Serbian, Joka (Emir Hadžihafizbegović), demands to ‘inspect’ the camp, something Dutch Major Franken (Raymond Thierry) insists is impossible until a call to Karremans, still embedded in Mladic’s ‘negotiations,’ opens the floodgates, the Colonel folding in the face of potentially unsupported armed conflict.  Joka terrifies everyone as he struts about looking for armed soldiers, and then insults the UN by throwing loaves of bread to their starving charges (a scene that cannot help but recall a certain incident involving paper towels in Puerto Rico).  When the buses arrive, Srebrenica’s mayor (Ermin Bravo) is one of the first marched out, and around a corner.  We hear gunfire.  Aida bangs on Karremans’ door screaming ‘they’re killing people outside,’ but it is clear the UN has completely lost control.  With Franken now the face of UN leadership, compassion flies out the window, and Aida scrambles to get her men on his list, hiding them in the interim, but Franken will only agree to list Nihad, who instead chooses to stay with his sons.

Djuricic is monumental in the lead role, painting a complex character of a woman convinced she can save her family through her connections.   Throughout, she herself is being pulled in a hundred directions by those who see her as their connection, by the doctor who needs her to direct setting up a makeshift medical area to treat the wounded and by the UN who needs her translation skills.  At one point, Zbanic allows her a lighter moment, sharing a joint after attending to an emergency birth, then erupting in a fit of the giggles, her memory taking her back to an absurd prewar scene.   Her defiant refusal to believe her family could possibly be destroyed after enduring years of war makes her ultimate betrayal a devastating injustice, the actress portraying unfathomable grief (8,372 civilians, mostly men and boys, were subsequently murdered).

Along with “Hotel Rwanda,” “Quo Vadis, Aida?” makes a strong case about the limited powers of the UN when faced with civil war and genocide.  Both films also use an insider’s attempt to protect family to portray a larger horror from an intimate perspective.   Zbanic takes things further though, revisiting Aida’s life when she returns to Srebrenica and we learn of further horrors and injustices, including enduring the pain of living in peace with those who sinned against you.

1995.  Aida (Jasna Dubicic) is a local English-language translator for the Dutch UN troops based in war-torn Bosnia. When Serbian rebels enter her home town of Srebrenica, she must work fast to save her husband and two sons from certain death in the fast-approaching ethnic cleansing that will devastate the country in “Quo Vadis, Aida?”

Movies about the Bosnian-Serb civil war, if there are any, are usually shown either from the viewpoint of the combatants on both sides or with that of the press. Director Jasmila Zbanic shift from the usual to that POV of Aida as she translates for the United Nations peacekeepers. When the Serbian invaders are at the doors of the town, thousands of its inhabitants flee to the safety of the UN compound, far too many for the Dutch to handle. The translator’s services become critical.

Aida’s importance grows when the Serbs, led by General Mladic (Boris Isakovic) who, as his soldiers and tanks enters Srebrenica, assures the town folk that they “are all safe.” Knowing the deadly history of the region at the time, my heart sank as the inevitable took place. Aida, too, in her frantic efforts to save her family, knows what is coming as imminent death descends upon the town.

Jasmila Zbanic puts us into the middle of this taut real life drama of a family and a country’s survival. While I was riveted by Jasna Dubicic performance as the strong and resourceful Aida, the director never lets us lose track of the dramatic and poignant history lesson that unfolds.

Before seeing “Quo Vadis, Aida?” I had some definite thoughts on the best femme performances for 2020 – like Kate Winslet, Michelle Pfeiffer and Elisabeth Moss. After, though, is a different story and Dubicic is my number one.

All aspects of this masterful storytelling are topnotch, from acting – Dubicic is the star and focal point of this true life drama but all performances are unsettlingly believable – to production, cinematography and, literally, a cast of thousands to convey the scope of this terrible time in history. After a second viewing, the sinking heart and stomach churn hit me just as hard as the first.