Queen of the Desert 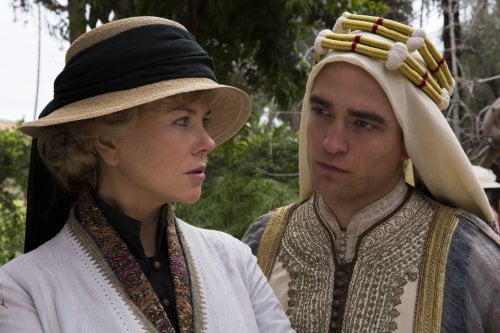 Gertrude Bell (Nicole Kidman) was an Englishwoman who, at the turn of the 20th Century, was a writer, world traveler, archaeologist, spy, government administrator and forward thinker who helped shaped the geopolitics of the Middle East after the Great War in “Queen of the Desert.”

Falling swan feathers and scattered rose petals in a Werner Herzog film? One can see why the story of academic explorer Gertrude Bell (Nicole Kidman) appealed to the Bavarian auteur, especially given the harsh landscapes through which she traveled, but he leans too heavily on romance and not enough on politics in this episodic epic. James Franco is seriously miscast as her first great love, a British undersecretary in Tehran. Damien Lewis fares a bit better as the married Charles Doughtie-Wylie, but surprisingly it is Robert Pattinson as this film's Lawrence of Arabia who has the most spark with Kidman, a communion of spirit (Lawrence was gay). The film looks stunning with sumptuous, exotic period detail, but its generic romantic score is a debit. Were it not for a little "Where the Green Ants Dream" celestial magic, I'd be hard pressed to identify this as the work of Herzog. Grade:

Gertrude Bell (Nicole Kidman) was an Englishwoman who, at the turn of the 20th Century, was a writer, photographer, world traveler, archaeologist, spy, government administrator and forward thinker who helped shaped the geopolitics of the Middle East after the Great War. Her incredible story is told in “Queen of the Desert.” This beautiful period-set biography tells the true-life story of a remarkable lady who went where no woman had gone before – into the hostile Bedouin lands in turn of the 20th century Arabia to broker the fall of the Ottoman Empire. Gertrude was a lady way ahead of her time and helped define the map of the modern Middle East. Whether that is good or bad is a matter for debate. Werner Herzog wrote and directed this lavish period drama and it looks marvelous with flowing robes and wind blown desert landscapes. I have always liked and appreciated his films, fiction and documentary and he has created some of cinema’s great films (usually with Klaus Kinski). With the story of the amazing Gertrude Bell, I expected a lot. Unfortunately, the lavish production, exotic locales and Kidman’s gorgeous costumes are hindered by an old fashioned biopic style. When I say old-fashioned, think of the adventure film biographies from the 1930s (a time when going to the movies was a brief escape from the burdens of life – it was the Great Depression, after all). In those films, as is in “Queen of the Desert,” the hero (or, here, heroine) is gorgeously coifed and costumed, never has a stray hair hanging down, never gets dirty or ages. Also, every crisis is faced down with courage and bravery and right and goodness always prevail. Nicole Kidman is the above-described heroine who goes, not only where no woman has gone before, but where few men dare to venture, too. Gertrude charms the most ruthless tribal chief, getting access and protection to the most dangerous lands of Arabia. She never, despite the harsh climate and austere conditions and the course of years, ages, as if the desert winds have a rejuvenating effect on just Gertrude. The episodes of the film are defined by the men in Gertrude’s life. James Franco is miscast as Gertrude’s first love, the 3rd secretary to the ambassador in Teheran, Henry Cadogan, but not to the point of annoyance. Damian Lewis fares better as married British official, Charles Doughty-Wylie, who longs for and helps the feisty Gertrude. Robert Pattinson, as T.E Lawrence. “of Arabia” fame, is Gertrude’s kindred spirit and platonic lover and the actor, in a short time on screen, fully embodies the character. One thing that “Queen of the Desert” did do for me is to inspire me want to learn more about Gertrude Bell. Until I saw the film and looked into Bell’s life, my hero was Jeanette Rankin, the first woman elected to the US Congress and who championed women’s right to vote. Gertrude Bell is right up there with Rankin on my hero list.