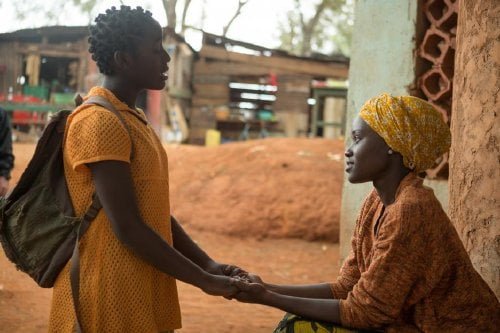 In the slums of Kampala, the widowed Harriet (Lupita Nyong'o, "12 Years a Slave") struggles to keep her four children housed and fed. Her eldest, Night (Taryn "Kay" Kyaze), chafes under her mother's demands, taking off with a flashy hustler. When Phiona (newcomer Madina Nalwanga) becomes fascinated with the game of chess being taught by Robert Katende (David Oyelowo, "Selma") at the local Church, Harriet finds the pursuit frivolous. Katende explains to her that Phiona's aptitude for the game could lead to a scholarship for the schooling Harriet cannot afford, so she gambles, sacrificing everything for the daughter who will become "Queen of Katwe."

You've seen this movie so many times before, a committed teacher inspiring children from a poor community to excel in an unexpected arena. But with Nyong'o on board, director Mira Nair ("Monsoon Wedding") and screenwriter William Wheeler (who adapted Tim Crothers' ESPN Magazine article) have found this story's true heart in a mother's faith. Knowing nothing else, Phiona is relatively happy with her life in the streets of Katwe, cheerfully hauling water to her family's small shack, helping her mother make their meager living selling vegetables in the street. Then Phiona follows her younger brother Brian (Martin Kabanza) into football coach Katende's Sports Outreach facility where he also teaches chess. He pairs her with a younger girl to teach her the basics. Gloria (Nikita Waligwa) tells her she loves the game because 'the little one' (the pawn) 'can become the big one' (the queen). She also tells Phiona she doesn't like her smell, shaming the 9 year-old. Katende offers her books and although she cannot read, she can study the board illustrations. Soon she's surprising everyone, especially when she beats his best, young Benjamin (Ethan Nazario Lubega). "Queen of Katwe" isn't really a chess movie, never delving into its strategies nor clearly laying the path of its various competitions and championship levels. It's the type of movie where characters speak in inspirational metaphor (when Katende wins a game against his protegee, he tells her 'Never tip your king so quick,' 'Never surrender.') and become fish out of water attaining Katende's hard fought tournament placement. Phiona's successes become crushing when contrasted with her regular life, air travel and hotels normal for many an eye-opening experience that makes her resentful. But Katende and his supportive wife Sara (Esther Tebandeke), who teaches Phiona how to read, keep pushing. Madina Nalwanga is a natural in the lead role, although the 14 year-old looks no younger, confusing in the story's timeline. She's an unflashy actress, quietly conveying contentment, curiosity, dejection and hope (all of the kids are convincing, well directed by Nair). Oyelowo is solid in a role difficult to portray as anything less than saintly, his Katende putting his kids before his own family's prosperity. It is Nyong'o who shines the brightest here, her mother fiercely protective, uneducated but open minded. She's phenomenal parading to a fabric merchant's in her one good dress all confidence and flirtation until she realizes she's being offered her eldest daughter's path. (It's surprising Disney didn't position "Queen of Katwe" as a Mother's Day movie on the strength of Nyong'o's performance.) But while Nair has done a fine job with her inexperienced young cast and a production which contrasts poverty and means in faraway places, "Queen of Katwe" follows an old playbook. The movie gets a heartening uplift at the very end as the cast is paired with their real life counterparts over closing credits. Grade: