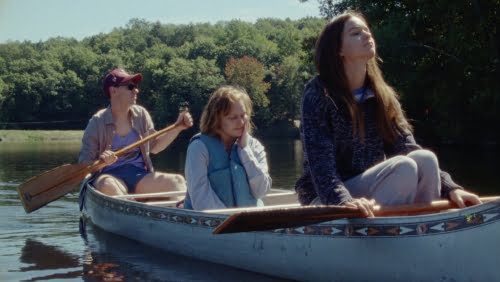 The daughter of a famous NYC-based artist, Catherine (Elisabeth Moss), an artist in her own right, forged her identity by managing her father's affairs. When she gets the one-two punch of his death followed by being dumped by her boyfriend James (Kentucker Audley, "The Sacrament"), Catherine retreats to her best friend Virginia's (Katherine Waterston, "Inherent Vice") family country home where she will descend into madness as she realizes she no longer is "Queen of Earth."

After garnering great reviews for his third film, "Listen Up Philip," writer/director Alex Ross Perry decided to go smaller again, this time taking his inspiration from cinema instead of literature. Perhaps that's why this dual character study, featuring a balls out performance from Moss and an eerie one from Waterston feels like so many other movies, everything from "3 Women" to "Your Sister's Sister" to "Rosemary's Baby" and "Repulsion," yet defies coming into its own focus. Still, despite its opacity, Ross Perry's created an unsettling mood and Moss fascinates throughout. We're immediately on James's side when he breaks ties with the tear-stained Catherine, her hysterical self-absorption immediately apparent (Ross Perry visualizes Catherine's heightened emotional state through the redness of her nose, her eyes, and, in calmness, her glossed lips, all of which pop against his otherwise neutral palette). Armed with a portable easel kit, Catherine arrives with Virginia at the lakeside home that's like an adult tree house, but instead of peaceful relaxation, Catherine remembers her prior year there with James and Virginia's harsh reaction to the then couple. The seesaw shifts and suddenly Virginia's seeing neighbor Rich (Patrick Fugit, "Almost Famous," "We Bought a Zoo") while Catherine feels more and more the outsider. These women demand undivided attentions. There is one startling discussion between the two, debating the merits of being the dumper or dumpee in a relationship, Sean Price Williams's camera slowly zooming and panning from one to the other as Keegan DeWitt's ("Listen Up Philip," "I'll See You in My Dreams") dreamy score begins to turn more ominous. It is Wednesday now (the film is chaptered by the day of the week in shocking pink and feminine script title cards) and we're crossing into psychological horror. 'I could murder you right now and no one would ever know,' Catherine coolly and confidently observes. 'I used to think you were perfect...then I saw you just surrounded yourself with men,' Virginia levels. The weekend brings a party - or is it a nightmare? - as Catherine's manic behavior escalates while everyone turns on her, laughing and physically prodding and poking, the final epithets 'spoiled rich kid' and 'stuck up brat.' 'You don't really know me,' Catherine defends. For this "Queen of Earth," that would require Herculean effort. Grade:

Catherine (Elisabeth Moss) breaks up with her boyfriend, James (Kentucker Audley), after she learns that he has cheated on her. She gets in touch with her childhood friend, Virginia (Katherine Waterston), and gets invited to Ginny’s family summer home for some peace and solitude. But, there are deeper problems in Catherine’s fragile mind that will come out in “Queen of Earth” Alex Ross Perry used the going to an isolated vacation home for refuge in his last film, “Listen Up Philip.” Where that character had to deal with the emotion of anger, Catherine is a whirling tempest of insecurities as she starts to withdraw from Virginia, especially when she meets Rich (Patrick Fugit), Ginny’s boyfriend. Elisabeth Moss does a solid job as Catherine slips into delusion and she begins to mistrust those around her, even Virginia. Her breakdown manifests itself at a party where she freaks out, thinking everyone is laughing at her and out to get her. Her downward spiral is rapid and shown with increasing close close-ups of Catherine’s face and the pain and confusion within. Katherine Waterston’s Ginny is more solidly grounded emotionally than her friend but she is powerless to help Catherine. “Queen of Earth” is far from being a happy story. It is a character study of a woman’s decent into madness that is not a pretty picture but a potent one.