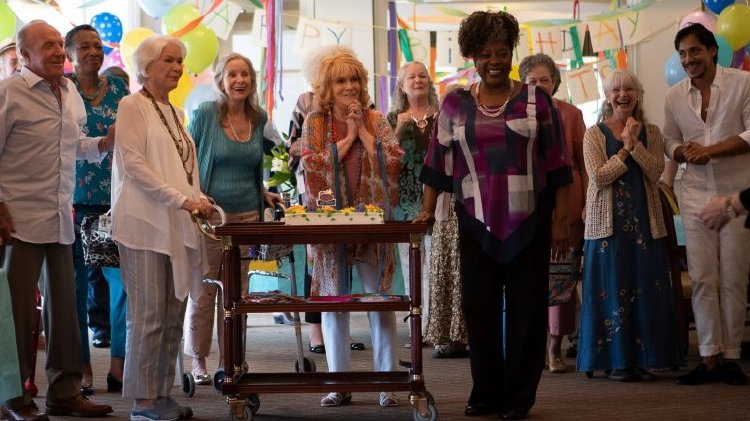 When her home is partially destroyed by a fire after she locks herself out for the umpteenth time, Helen Wilson (Ellen Burstyn) decides to make a temporary move into the Pine Grove Senior Community. She is shocked to discover an experience much like high school, complete with a trio of mean girls known as the “Queen Bees.”

Beware movies boasting starry senior casts, especially when the director (Michael Lembeck) has made his mark with television sitcoms (TV's 'Mad About You,' 'Friends') and the writers include a TV Christmas movie specialist (Donald Martin).  Cowritten by producer Harrison Powell, who based the story on his grandmother's experience, “Queen Bees” leans on every cliché in the book yet can’t even develop its titular theme as only one of its ‘rhymes-with-witch’ trio is a geriatric mean girl.  Thankfully the lovely and elegant Burstyn and the reliably charming Devine keep the film from being a total wash, but this is a movie whose 100 minute running time feels like 3 hours.

My mom lives in a place much like the one portrayed here and the table seating incident seen in “Queen Bees’” trailer rang awfully true.  While a couple other incidents, like the inordinate attention paid to single men by widowed women, are also observable in real life, they’re played with such a megaphone here all that’s missing is the canned laugh track.  That also holds true for the wisecracks traded between mother Helen and her daughter Laura (Elizabeth Mitchell, "The Purge: Election Year"), some of which are even amusing but rarely sound like anything someone would actually say.  Then there all the things we’ve seen so many times before.  Seniors ‘shockingly’ smoking pot?  Check.  Seniors kicking butt?  Check.  Bathroom humor?  Check.  A romance begun with a lie that becomes real until that lie is exposed?  Check.   The misinterpreted ‘other woman’?  Check.  A wedding finale?  Check.

The way these elements have been pulled together feels ramshackle, some aspects, like that misunderstood mean girl changing at the drop of a hat, making no sense whatsoever (she’s really a good person, except the reason we’ve just been given for her hurt inexplicably paints her as a bad one).  That would be Jane Curtin, whose attempts to sell this character involve exaggerated facial contortions.  Helen’s close relationship with her grandson Peter (Matthew Barnes, so ‘up with grandma’ he does everything but glad hands) involves trading famous quotations, yet we’re supposed to believe this oldie loving, forgetful elderly woman would recognize a Miley Cyrus song lyric?  That’s a cheap laugh in lieu of character.  A romance between Margot (Ann-Margret) and Arthur (Christopher Lloyd) consists of embarrassing mugging until it turns into gooey sentimentality.  There’s nothing cinematic about the production, something we’re tipped off to from the first few notes of the score.

Burstyn manages to glide through this disaster with grace, her hesitant romance with Dan (James Caan, restrained, which is most welcome here) quite lovely (as is the actress at 89!).  Her best scenes with a Bee are with Loretta Devine’s Sally, whose uproarious bit on ‘underboob sweat’ is the film’s funniest.  But these elements are like a life raft on the Titanic.  Avoid this one and check out a similarly themed yet far superior movie, 2015’s Blythe Danner starrer, “I’ll See You in My Dreams.”

Helen (Ellen Burstyn) lost her dear husband Charlie some years ago but happily continues living independently in her own home. Then, she locks herself out, leaving the stove on high, and a fire breaks out. The damage is so extensive, she has to find a place to live during the renovation and reluctantly agrees to stay at the Pine Grove retirement village – but only temporarily, she insists – in “Queen Bees.”

Octogenarian Ellen Burstyn and a movie titled “Queen Bees.” It does not take a rocket scientist to figure out, with that bit of info alone, what you are about to see, and you are probably going to be 100% right.

When Helen faces moving out of her home, even for a little while, she digs her heels in with her realtor daughter Laura (Elizabeth Mitchell) and sympathetic grandson, Peter (Matthew Barnes), and plans to stay at Pine Grove for as short a time as possible. Then, while sitting down to eat breakfast, she is confronted by the titular bossy ladies who curtly ask her to leave “their” table. Well, only one of them, Janet (Jane Curtin), insists she vacate the space. The other members of the QBs, Sally (Loretta Devine) and Margot (Ann Margret), are happy to have Helen join the fold.

This sets the stage for what abounds in elder clichés with seniors acting randy and cutting up cute. Director Michael Lembeck and team of writers (Fred Bernstein, Harrison Powell, Dominique Telson) throw just about every chestnut they can. To the filmmakers’ (minor) credit, they do briefly touch on issues like dementia and loneliness, but too little too late.

Gravitas Ventures releases “Queen Bees” in theaters and on demand on 6/11/21.