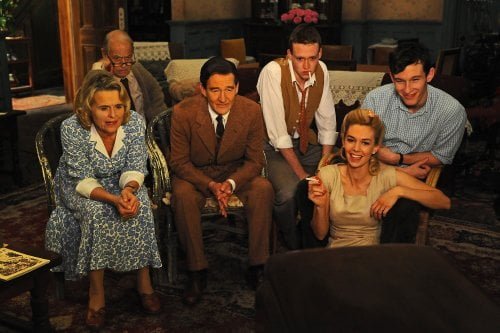 It has been over a decade since young Bill Rowan and his family and friends endured the Nazi Blitz. It is 1952 and he is all grown up and is awaiting conscription into the British Army to be shipped to fight in Korea. But Bill (Callum Turner) and his buddy Percy (Caleb Landry Jones) never get within 10000 miles of that distant battleground as they teach soldiers how to type for “Queen and Country.”

When we last saw Bill Rohan, it was 1943 and he was arriving at school to see an exultant mate thanking Hitler for bombing it. Nine years later as the Korean War rages, Bill (Callum Turner) is 18, living in the home his mother fled to, The Sphinx on Pharaoh's Island on the Thames, and about to be conscripted into the Army for "Queen and Country." Twenty-seven years after his autobiographical "Hope and Glory, writer/director John Boorman ("Deliverance," "The General") returns to the England of his youth where a different war presents entirely different challenges. This melancholy comedy finds a young man's perspective undergoing radical changes as his head is turned by women and a best friend whose pranks on a military base affect several lives. After drifting blissfully, swimming in the Thames and observing film shoots for nearby Shepperton Studios (foreshadowing the director's future), Bill receives the summons that will determine the next two years of his life. But instead of being shipped overseas, Bill and his new buddy Percy Hapgood (Caleb Landry Jones, "The Last Exorcism," "Antiviral") finds themselves teaching new recruits to type. They also, along with Private Redmond (Pat Shortt, "Calvary"), wage war against their superior, the insufferably rigid Sergeant Major Bradley (David Thewlis, the "Harry Potter" series, "The Theory of Everything"). Even Major Cross (Richard E. Grant, "Withnail & I," TV's 'Downton Abbey') is tired of administering to Bradley's petty infraction reports. There are two main story lines in "Queen and Country" - the intersecting love lives of Bill and Percy and the campaign against Bradley - but Boorman couches these tales in the historic events of their time - the death of King George VI, the coronation of his daughter Elizabeth and the arrival of a television in the Rohan household (just in time to watch said coronation). The events of "Hope and Glory" also reverberate, with Bill witnessing his mother Grace (Sinéad Cusack, "I Capture the Castle," "Eastern Promises") waving to her lost love across the river and his sister Dawn (Vanessa Kirby, "About Time") arriving from Canada with two children and a marriage on shaky ground. Bill and Percy's romantic escapades also allow Boorman to reflect on the cinema of the time. Percy hooks the lads up with local nurses Sophie Adams (Aimee-Ffion Edwards) and Peggy (Miriam Rizea) for a movie date, but Bill's more taken with a mysterious and sad blonde sitting in front of them (Tamsin Egerton, "Grand Piano"). His obsession ends up having the oddest domino effect. Meanwhile, Percy, a self-described 'skiver,' colludes with Redmond to steal the regimental clock, and the fallout breeds betrayal. Bill, who tells his recruits like it is, is charged with 'seducing a soldier from the course of his duty,' when the son of an MP refuses his commission. Their last laugh involves entrapping Bradley into admonishing an NCO in the presence of a private, a charge which sends the man for mental evaluation and which Bill discovers is not so funny when seen in a new light. Turner, known mostly for British television, is very appealing in the lead role, a sort of English Adam Driver. Landry Jones has been building quite a filmography of unusual supporting roles, but he goes a little too far over the top here, a mad joker amidst a group of clowns. Shortt is a humorous slacker, an unwilling cog who skates by with medical excuses and wit. As the bullying sergeant, Thewlis is nonetheless sympathetic, his nervous tick whenever gun fire is heard suggesting unheeded psychological damage. Egerton portrays another damaged character who uses her beautiful frailty to manipulate men. As Dawn, Kirby is a bit too free-spirited, her sexual curiosity seemingly extended to even her brother. The film also stars Brían F. O'Byrne (HBO's 'Mildred Pierce') as RSM Digby. "Hope and Glory's" David Hayman returns as Bill's dad. "Queen and Country" is a light, nostalgic military coming of age story with mournful undercurrents. While the film may feel slight compared to its precursor, Boorman deftly manages shifting tones while preserving post-war memories in a very specific time and place. Grade:

Director John Boorman brought us the first installment of Bill Rowan’s young life in 1987 with “Hope and Glory.” We saw the war through the eyes of a 10-year old boy, surviving Luftwaffe bombings and privations of war and having a ball doing it. The helmer jumps forward with his alter-ego, Bill, and tells of his days during another war and his trials and tribulations in the army, especially with the stickler for detail and constantly berating Sgt. Maj. Bradley (David Thewlis), leading to a battle of wills. The center of “Queen and Country” is not so much about the tedium of army routine, though that abounds in the film. It is more about the amorous pursuit of young women, with Percy being seduced by Sophie (Aimee-Ffion Edwards) and Bill being smitten with the beautiful and mysterious Ophelia (Tasmin Egerton). There is also a story thread about a clock presented to the regiment by Queen Victoria that goes missing. Mainly, the film is about the tedium of army life and youthful romance. John Boorman has had an eclectic career with cinema classics, such as “Deliverance (1972)” and “Point Blank (1967), and bombs, like “Exorcist II: The Heretic (1977)” and “Zardov (1974).” With his most personal films, “Hope and Glory” and “Queen and Country,” he loosely turns to his own life, first as a boy, then as a young man. One question I have is: will John Boorman turn his pair of films into a trilogy? He peaked my interest with his first two installments of the life of Bill Rowan and I am curious to see how the guy turns out. Hopefully, it will not be another 28 years.