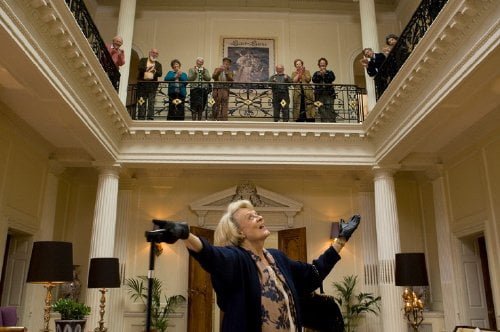 The big event at the home for retired opera singers is the annual performance of the Rigoletto by its members to celebrate the birthday of their idol, Giuseppe Verdi. That is until Jean (Maggie Smith), the ex-diva ex-wife of one of the residents, Reggie (Tom Courtney), comes to live amongst them and a note of discord is introduced to the performance by the “Quartet.”

Most of the residents of Beecham House, a home for retired musicians, are quite content, especially those who are preparing to participate in its annual charity gala, a celebration of Verdi's birthday coordinated and directed by Cedric (pronounced CEEdric, as he is quick to note to one and all) Livingston (Michael Gambon, Harry Potter's Dumbledore). But the House is turned on end when a star, Jean Horton (Maggie Smith, "The Best Exotic Marigold Hotel"), arrives, completing the trio already there who once sang with her on a famous recording of Rigoletto's Act 3 "Quartet." In the first half of 2012, Dame Maggie Smith played an irascible loner on a wait list for a hip replacement in "The Best Exotic Marigold Hotel." Now she's back at the end of the year playing much the same part. But "Quartet," adapted from his own stage play by "The Pianist" screenwriter Ronald Harwood, is American actor Dustin Hoffman's feature directorial debut and although it aims for the same demographic and has its own share of cliches, it's a mite better than Madden's film. The film opens by introducing us to the rhythms of the house (filmed in Taplow's Hedsor House) and its occupants. We see elderly musicians playing their instruments, people still involved. We learn that Cecil is beside himself because his gala star performer, Frank White (Michael Byrne, "Harry Potter and the Deathly Hallows, Part 1), has dropped out due to illness. Then the focus comes in closer and we meet Jean's former friends and colleagues. Wilf Bond (Billy Connolly, "Mrs. Brown") is clearly the resident rascal, flirting with any female whether she be the young Dr. Lucy Cogan (Sheridan Smith, "Hysteria") who runs the home or Cissy Robson (Pauline Collins, "Shirley Valentine," " You Will Meet a Tall Dark Stranger"), a woman he has clearly long cared for, now winking in and out of dementia. The distinguished Reginald Paget (Tom Courtenay, "The Dresser") fills out the trio. We also see Jean Horton, fretting as she leaves her stylish home, muttering a rehearsed apology in the back of a cab. When she finally arrives, she's given applause from the balcony by all but her arch rival Ann Langley (opera star Dame Gwyneth Jones). Reggie, the man she's afraid to meet again, almost goes into shock when he learns who has arrived. Jean informs Dr. Cogan she will take meals in her room (not allowed) while Reggie informs Dr. Cogan he will need to look for a new living arrangement. Jean has sworn off singing, but we know Cecil has a big gap to fill. It takes a while to learn just what happened between Jean and Reggie, and even after one learns, there's more to the story. The ensemble works brilliantly together, Collins' sweetness in sharp contrast to Smith's diva temperament, Connolly's puckishness a foil for Reggie's sobriety. But the characters aren't one note - Smith is seriously trying to make amends and she back pedals in honest sorrow when her actions cause hurt. The diva is never far from the surface though. Connolly's concern for Cissy is touching and Cissy's openheartedness is both sweet and exasperating. Reggie may be serious, but he's able to really connect with the teenaged class who come to him weekly. A debate on opera versus rap and hip hop with student Joey (Jumayn Hunter, "Attack the Block") is a highlight. Smith is terrific as the caring authoritarian with an Achilles heel. Hoffman's filled out his cast with real life retired musicians and performers who get their due during closing credits. Director of photography John de Borman keeps everything fairly traditional with crane shots closing in to find the action (in one lovely scene, Reggie stands outside on a balcony looking at Jean across a courtyard through her window - de Borman's camera slowly zooms in in between them, to highlight the violinist inside who's been providing the musical emotion). Harwood's story was inspired by a documentary called "Tosca's Kiss" about a similar rest home in Italy. It's a lovely story and while he and Hoffman often go for the expected, they can also be unconventional (no one dies!).

Think of “The Best Exotic Marigold Hotel” with music. Both the latter movie and Dustin Hoffman’’s directing debut stars cute elderly people trying to cope with retirement and old age. And, both have Maggie Smith performing the same character. Here, in “Quartet,” she is an aging opera diva who expects special attention by the staff and residents of Beecham House. This is a retirement home where no one seems to be plagued by failing bodies, Alzheimer’s and other diseases of the aging. Everyone is in fine fettle and the players are all spry and funny. “Quartet” has a couple of things going for it. Dustin Hoffman, in his first film behind the camera, shows that he knows his way around directing and elicits charming and funny performances and characters from his ensemble cast of Britain’s senior thespians. Jean and Reggie are joined by the other members of the titular group, sharp-witted and randy Wilf (Billy Connelly) and sweet and ditzy Cissy (Pauline Collins) and the home’s self-appointed musical director Cedric (Michael Gambon). Sheridan Smith fits in with this senior cast quite well as their young caretaker, Dr. Lucy Cogan The other thing that is a plus for “Quartet” is the marvelous use of music, culminating in the anticipated performance of Rigoletto by the four former opera singers. It is worth the wait, making “Quartet” a draw for more mature audiences. With this and “Marigold Hotel,” we seem to be on a roll with films aimed at people over the age of 30.