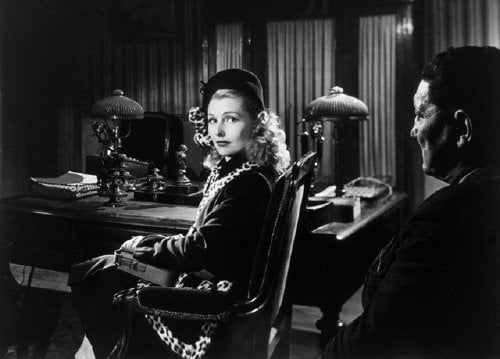 Jenny Lamour (Suzy Delair) is an ambitious chanteuse looking for fame in the music halls of post war Paris. Her pianist husband Maurice Bernard Blier) loves her but is also a very jealous man. When the lecherous owner of a film studio, George Brignon (Charles Dullin), promises her a part in one of his movies – for a price – it triggers a series of events that do not bode well for the couple in “Quai des Orfevres.”

In a dimly lit interior, we watch a housewife cleaning her home. Agnes (Kelly MacDonald, "No Country for Old Men") seems right out of the 1950's in both her dress and surroundings. When she hangs a Happy Birthday banner, we assume she is preparing a party for her husband, but it is not until she has served party goers and carries out the cake that we realize the birthday is hers. But Agnes, whose existence has been absorbed by caring for the men in her life, is about to have an awakening, all inspired by the gift of absent Aunt Emily (Audrie Neenan), a 1,000 piece jigsaw "Puzzle." It is difficult to believe that this is the first lead film role for Scottish actress Kelly MacDonald, who made her first appearance in 1996's "Trainspotting." This may be a small film, a remake of the 2009 Argentinean film "Rompecabezas" adapted by Oren Moverman ("The Messenger"), but MacDonald's quiet intensity keeps us thoroughly engaged with Agnes's predicament, a late blooming coming of age. Director Marc Turtletaub creates two entirely separate worlds for his star, one beckoning with new experiences, the other hampering with traditional expectations. One of the things that sets "Puzzle" apart is that Agnes is complicit in her own servitude. The woman who once cared for her widowed father in their religious immigrant community, now tends to a husband, Louie (David Denman, "13 Hours"), and their two adult sons, Ziggy (Bubba Weiler) and Gabe (Austin Abrams, "Brad's Status"). Turtletaub uses a bit of symbolism at film's beginning that explains a lot about Agnes. Lou carelessly lets a china plate slide from his lap during her party. Agnes immediate tends to it on hands and knees, Lou gently chiding her to let it wait. She tries to piece it together, something she clearly cares about when Lou has not, but there is a piece missing. Yet we never get the impression Lou has anything but loving regard for his wife. He's just never been challenged to consider needs that even she hasn't. Young son Gabe has tried to draw her out with the gift of an iPhone, but Agnes has no use for it, at least not initially. But Gabe also has expectations of his mother, annoyed when she forgets to accommodate his girlfriend Nicki's (Liv Hewson, "Before I Fall") veganism. Older son Ziggy becomes a bone of contention when Lou describes him as lazy, lacking in ambition, but Agnes realizes the boy is just unhappy working for dad at the family auto body shop, reluctant to bring up his dreams of becoming a chef. Ziggy is in the same boat as his mother, oppressed by traditional expectations. Things begin to change gradually when Agnes makes some time to attack her new puzzle, a global map. She's very satisfied with its completion and begins to search in the basement for more. She calls her aunt, who is housebound with a broken leg, to ask where the puzzle was purchased and ventures into Manhattan to buy another. There she sees an ad for a puzzle partner. Not fully understanding its meaning, she calls and ventures into Manhattan once again to meet Robert (Irrfan Kahn, "The Lunchbox"), a man made wealthy by one invention who now devotes his time to puzzle championships and whose former partner, his wife, has just abruptly left him. Unlike Louis, Robert see things in Agnes she herself has not recognized. Agnes's behavior begins to change. She lies to cover time spent with Robert. She begins to rebel, 'forgetting' to pick up Louie's favorite cheese at the market. Pushing back on Louie about Ziggy's future inadvertently sets up a larger misunderstanding that will upend the entire family tradition. MacDonald compels quietly, but every tiny out of character moment is like a red flare in Louie's eyes. Denman's puzzlement is real, his first reaction retreat, then cajoling then confrontation. Kahn is his opposite, perceptive, yet like Agnes, not realizing his true potential. Kahn's confident charm is a delicate balance of prodding and pulling back, the gentle romance sparking between he and MacDonald mutually beneficial. Turtletaub's direction allows all of these characters to slowly come to realizations, his dimly lit production gradually allowing in the light. "Puzzle" satisfies deeply as its heroine finds the pieces missing from her life. Grade:

Jenny’s aspirations to be a singing sensation, and her self perceived ability to control the men around her, make her accept a clandestine “dinner” with the sleazy producer. When Maurice finds out about the upcoming assignation he is furious and forbids his wife to go. Later, he finds proof that she defied him and he heads to Brignon’s home for a potentially murderous confrontation. (Maurice, earlier, stated in front of witnesses that he would kill the lecherous producer if he touched Jenny.) When he gets to the palatial home, though, he finds that someone beat him to the punch and killed the mogul. Maurice, realizing that he, because of his outburst and threat to kill Brignon, is a prime suspect and attempts to build a shaky alibi. He also learns some shocking news that threatens disaster, arrest and prison but you have to watch the film to find out. Things kick into gear when Inspector Antoine (Louis Jouvet) is assigned to investigate the murder and, with a character that Colombo could have been modeled after, uses absent minded mannerisms and “Oh, I have one more question” to get to the truth. Very typical of Clouzot’s films, he utilizes sound and score to enhance tension and his penchant for mystery uses the whodunit to good effect, always shifting his subjects from innocence to guilt and back. Acting is second tier compared to his later films (see “Les Diabolique”) but the story, its frantic pace and clever twists make this a fun look at a classic director’s early work.