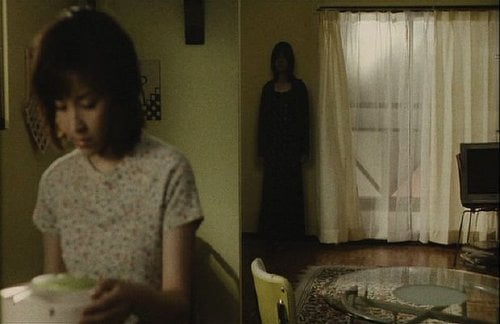 In the offices of Tokyo's Sunny Plant Sales, Michi (Kumiko Asô) tells coworkers Junko (Kurume Arisaka) and Yabe (Masatoshi Matsuo) she's gotten the creeps. She's concerned that Taguchi (Kenji Mizuhashi) hasn't returned with a hard drive he was working on, so heads to his apartment. Her instincts are justified when she finds Taguchi reflected in his monitor and the young man hangs himself. In another part of the city, college student Kawashima (Haruhiko Katô) inserts a disk to set up an Internet connection, but unplugs everything when strange images appear and he is asked 'Would you like to meet a ghost?' Arrow Video releases writer/director Kiyoshi Kurosawa's ("Cure," "Tokyo Sonata") 2001 classic "Pulse" for the first time on blu-ray.

Kurosawa's films embed social criticism within genre and his "Pulse" is a prescient metaphor for the alienating effect of Internet connectedness. This existensial horror film has roots in German Expressionism and David Lynch as well as the J-Horror movement it helped spawn, Kurosawa's unsettling visuals featuring disjointed, shadowy human movement with sound that maximizes unnerving everyday clangs and modem noise by surrounding them with silence. While Michi and Kawashima animatedly search for the truth, the shrinking population of Tokyo more and more resembles the somnambulant dejected who stare back from computer screens. We first meet Michi alone, staring off into a vast expanse of stormy ocean from the deck of a ship. The entire film is a flashback, explaining how she came to be there. After Taguchi's suicide, Yabe goes to investigate. Ignoring a printed warning, he removes the red tape from around a door to the Forbidden Room, encountering a woman who shuffles towards him in fits and starts, her limbs at awkward angles. He is terrified and manages to escape, only to disappear, a black smudgy outline the only evidence of his former existence. When Kawashima's computer begins turning on by itself, the self-professed Luddite goes to the computer lab looking for help. Harue (Koyuki, "The Last Samurai") gives him instructions on bookmarking and screen printing, eventually agreeing to go to his apartment and see for herself. When he finds her next, she's in the school library reading a book on phantoms as one eerily glides through the stacks. Kawashima's obviously attracted to Harue, but she maintains a distance. As more and more people commit suicide or disappear Michi crosses paths with Kawashima and head to an abandoned warehouse they believe is the source of the ghostly summons, only to witness more tragedy. A plane plummets into the neighborhood. Black smoke rises on the landscape. The two make their way to the ship, its only other passenger its captain (Kôji Yakusho, "Shall We Dance?," "13 Assassins"). Haruhiko Katô shines, his unconventional economics student endearing. As the film's lone stranger to technology, his character is the most 'alive' in the film, the one most intent on forming face-to-face relationships. He comforts Harue by taking her hand before becoming Michi's only friend. But as Kurosawa's projected a world where the living and dead have become interchangeable, he's directed performances of decreasing engagement. His images may be creepy, but the fear he creates is of loneliness. When Michi calls her mother, the calls is answered, but no one responds. It's as chilling as the ghosts we do see. Cinematography by Jun'ichirô Hayashi ("Ringu," "Dark Water") features a palette best described as sickly industrial murk, ghostly images appearing like fifth generation videotape - until we see their eyes shine in eerie closeups. Original Music by Takefumi Haketa and Makio Ika's sound add to the doom and gloom. Some subpar CGI dates the film, but its use to achieve a stunt jump is seamless. The Blu-ray: The blu-ray doesn't deliver much of a visual bump as the original film relies on murky images but it is loaded with extras, many exclusive to Arrow's new release. In a 45 minute interview from May, 2016, Kurosawa talks about breaking into the business via pink films, TV dramas and direct-to-video movies, 'slow' Japanese vs. 'explosive' American film ghosts and the Japanese historical regard of cities as impermanent. He also talks about the influence of Tobe Hooper, whose filmography outside of "The Texas Chainsaw Massacre" he believes underrated with Hooper's "The Funhouse" not only one of his favorites, but an influence on his warehouse scene. The piece is only marred by frequent use of out of context "Pulse" clips. A concurrent 25 minute interview with Hayashi is of less interest, the cinematographer spending more time noting Kurosawa's weirdness and his disagreements with the director's choices than how he actually shot "Pulse." A 17 minute piece with director Adam Wingard ("You're Next") and "Blair Witch" writer Simon Barrett notes their nostalgia for VCDs and Kurosawa's influence. There is an archival Making Of featurette which showcases Kurosawa building scenes with his actors and breakdowns of four special effects scenes plus trailers, TV spots and more. Grade: