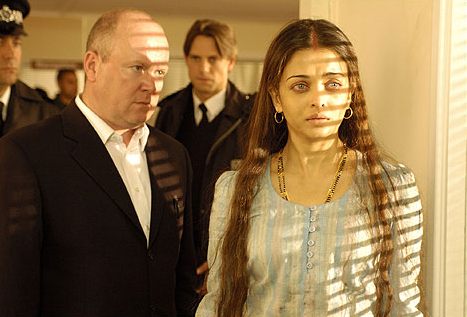 A man awakens from his drunken sleep to discover that he is on fire! He panics and runs, resulting in third degree burns over much of his body. The police investigate the incident and discover two things: the man’s wife, Kiranjit (Aishwarya Rai), clutching her children in a near-catatonic state and evidence showing that the fire was by arson. She is charged with the attempted murder but her battered and bruised body shows that she was “Provoked.”

Kiranjit (Aishwarya Rai, "Bride & Prejudice") wanted to study law, but her parents advised marriage and children first. Taken to London by new husband Deepak Ahluwalia (Naveen Andrews, "Bride & Prejudice," TV's "Lost"), the future looks bright until Kiranjit discovers that Deepak is a cheating alcoholic tyrant. After ten years of beatings and humiliation, Kiranjit finds her moment as her husband sleeps, setting him on fire in their bed. She is found guilty of murder and sentenced to life in prison, no matter that she was "Provoked." Holy "Burning Bed!" If Britain had its own equivalent of the Lifetime channel, "Provoked" would be tailor made for it. Despite a fine cast including the stunning Rai of the Bette Davis eyes, hunky Naveen Andrews (TV's "Lost") gone all rotten, Miranda Richardson ("Harry Potter and the Goblet of Fire") broadly emoting as a dyke con with a heart of gold and Robbie Coltrane and Rebecca Pigeon as Kiranjit's legal counsel, director Jag Mundhra ("Tales of the Kama Sutra 2: Monsoon") serves up a soapy, cliched issues flick almost laughable in execution. Woman's rights activist Radha Dalal (Nandita Das, "Earth") is introduced in a silly sequence that aims for screwball comedy juxtaposed with scenes of Andrews brandishing an iron over the terrified Rai's face and such women-in-prison groaners as the overweight, leather vested, facially pierced bully (Lorraine Bruce). "Provoked" is an earnest do-gooder, championing the recognition of Battered Women's Syndrome and Britain's adoption of the Provocation Defense, an admirable aim and example for the United States's legal system, but a ham-handed film is a ham-handed film and this one's not worthy of theatrical release.

What we have here is a femme empowerment film that plays like a made for the Lifetime Channel feature length soap opera. However, “Provoked” makes it to the big screen for a number of reasons. First is the beautiful visage by of Bollywood superstar Aishwarya Rai that is center screen for a good percentage of the film. Next are some fine performances, particularly Miranda Richardson as Kiranjit’s too good to be true cellmate, Veronica. Finally, the heart-on-its-sleeve, spousal-abuse-is-bad true-life story screenplay by book author Rahila Gupta and Carl Austin will have big appeal to the feminine viewer. It is a chick flick Rai is, for much of the film, a blank but beautiful cipher who is in shock and fear after her desperate attempt to end the constant, painful abuse by her husband, Deepak (Naveen Andrews). Her transformation – prison is Kiranjit’s first step to freedom, we are solemnly told – starts slowly, with the timid, frightened young woman barely coping with the new state of her life of trial and incarceration. But, with the help of her prison grrrrl! friends, she grows into a strong-willed fighter who will never again be the object of any man’s abuse. “Provoked” is very pro femme/pro human fare. I have to warn any guy who is not a movie maven: walk softly around this one unless you want to make points by seeing “Provoked” with your S.O. The femme target aud will appreciate its message of empowerment.