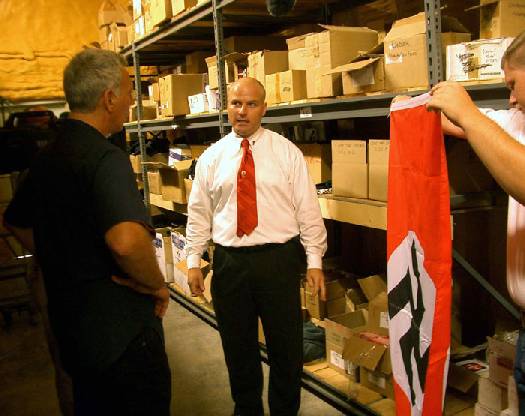 When writer/director Marc Levin ("The Last Party," "Slam") had an Egyptian cab driver tell him in all seriousness that no Jews had been killed on 9/11 because they had all been warned to stay home from work that day, he decided to take a further look into why anti-Semitism seemed to be on the upswing since that terrible day. Levin's research continued to bring him to an oft debunked piece of early twentieth century Russian propaganda called the "Protocols of Zion."

And if Levin had stuck to his original quest, "Protocols of Zion" may have been a more disturbing and illuminating documentary. However, Levin follows any anti-Semitic thread that crosses his path, derailing his structure and obscuring his point. A brief history of the Protocols, which were cooked up by Russian Secret Police in the late nineteenth century to stir up hatred and mistrust of the Jews, gets us started. This document claims to be the meeting minutes of a group of Jewish Elders plotting world domination. Taking a page from Errol Morris' "Fog of War" structure, but with less discipline, Levin randomly chooses individual protocols, then attempts to rebut them with proof to the contrary, but ofttimes he seems sidetracked from the get-go. Levin establishes himself as an amateur conspiracy theory sleuth by digging out his old collection of Kennedy assassination memorabilia from his father, Al's, attic. Levin senior, also a filmmaker, accompanies his son on this new journey, often providing ins such as the entry to Trenton State Prison where the Levins have a very reasonable conversation with a group of inmates about separatism and hatred, which is a rebut to Protocol Five about inciting rage through hatred. But using himself as the instrument of proof is hardly validation. The protocol regarding use of the media obviously leads Levin to Hollywood, where he's stymied in attempts to form a panel discussion with the likes of Norman Lear, Rob Reiner and Larry David, so he instead turns to the much debated film "The Passion" to illuminate his points. What results, however, is his taking part in a group discussion where he seems surprised to find staunch Catholics telling him that redemption is only possible through Jesus Christ. Granted, he has made the point that anti-Semitism's roots can be found in the birth of Christianity, but this is a far more encompassing net that he had originally thrown. His attempts to probe the Israeli-Palestian conflict, while dealing with the Muslim religion which appears largely responsible for trotting out the Protocols in the wake of 9/11, appear terribly one sided because of his propensity for speaking with fanatics on New York's streets. In another example of making his own case murky, Levin looks into the story of five Israelis who reportedly filmed the first attack on the World Trade Center while looking happy about it. Although they were cleared (and deported) by the FBI, even Levin admits the story raises questions as he wags his finger at those who would jump to conclusions. Point not well made. Levin does raise many good points, however, and he's frequently cheeky doing it, such as when he calmly sits eating a stack of matzos while talking to an Arab television producer about depicting the Jews as murderers who slit the throats of children to use their blood for mixing cracker meal. There are moments of astonishment, such as footage of the Malaysian prime minister quoting from the Protocols during a public speech in 2003. Levin also ties up his work with the very moving story of a well-loved Jewish man who died in the first Tower, leaving behind a wife who had converted to marry him. In the end, though, "Protocols of Zion" is too unshaped and rambling to leave one as stunned as one should be. This may be the first case where a remake of a documentary is in order. Clearly the subject matter is there.