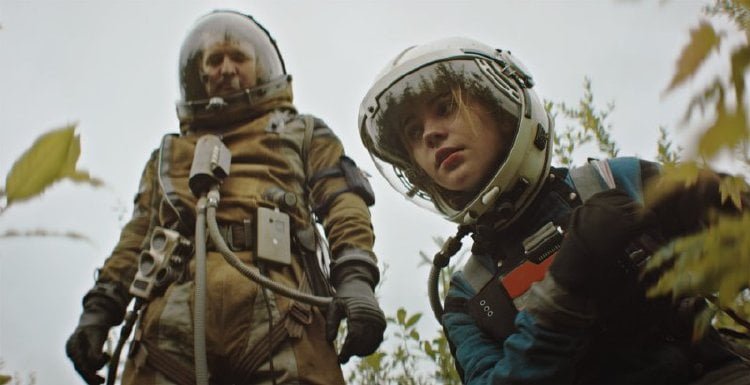 Damon (Jay Duplass) and his teen daughter Cee (Sophie Thatcher) operate a small-time prospecting operation searching for an elusive gem found on a remote, toxic moon. But others, far less scrupulous, are also searching for the jewel and will take it by any means necessary, even murder, in “Prospect.”

On their way to a lucrative mining field where Damon (Jay Duplass) has contracted with mercenaries to lend his skill as a digger, he and his teenaged daughter Cee's (Sophie Thatcher) rickety spacecraft begins belching sparks and smokes, necessitating a crash landing on an alien moon. Damon is focused on reaping one last big reward while Cee is more concerned about getting home, a goal which becomes increasingly remote as they encounter bandits and scavengers also looking to "Prospect." Gunpowder & Sky has chosen this film to launch their new Sci-fi streaming service Dust and it is well worth a look. Writer/directors Christopher Caldwell and Zeek Earl, adapting their 2014 short, have built an alien world in a Washington State rainforest using little more than reflective motes dancing in the air, bladder-like Aurelac creatures which produce valuable gemstones for those like Damon who know who to release them and a host of well worn space gizmos. The story is a coming-of-age Western set in space and newcomer Thatcher is a talent to watch. Once landed, Damon is intent on making his way to the Queen's Lair, the Aurelac field rumored to be worth millions, while Cee is worrying about making it back to 'catch the sling.' Along the way, a dead prospector points Damon to an Aurelac, the better for Caldwell and Earl to give us an extraction exhibition. The procedure is both dangerous and tricky, the milky white gemstone with an amber-like center which Damon extracts worth about $10K but nothing if he'd botched the job. But soon afterwards, father and daughter run into a couple of suspicious men. A gunfight ensues leaving two dead and Cee's survival dependent on Ezra (Pedro Pascal), the man who's killed her father. Those 'guns' resemble metal tubing hooked up to power packs carried on the waist, one of many ingenious props. Notable is the contrast between Cee's well worn spacesuit and Ezra's, superior in design and quality, and it is in this type of detail that the filmmakers excel. Ezra, who speaks in the overly formal patterns of old Westerns, gradually gains something like Cee's trust, especially when he, unlike her father, takes an interest in her interests, like the book she loves and lost and is rewriting from memory. Along the way to Queen's Lair, they'll run into a strange tribe led by Oruf (Andre Royo), approached by Ezra in search of 'juice' to treat his wound. We never learn if he'll agree to what they want in trade, but Cee's resourcefulness makes her this film's most valuable commodity, something Ezra learns when he presents himself to the 'Mercs' as her father Damon. Grade:

I have been a fan of science fiction since I was a kid, feeding on the novels and novellas of Isaac Asimov, Robert Heinlein and Ursula Leguin late into the night. So, when a small budget, intelligent and imaginative sci-fi movie comes up on my radar, I am interested. First-time feature filmmakers Christopher Caldwell and Zeek Earl create, through imagination and simple effects, a story about prospectors, claim jumpers, survival and greed in what used to be called a “space oater.” We, with Cee and Damon, are landed on a hostile world whose air is deadly to breathe. It is an old fashioned western set on another world. The tiny cast does well toting around their bulky space gear and energy weapons and living a tough, dangerous life, often without a lifeboat. Newcomer Sophie Thatcher, despite the almost ever-present space suit and helmet, shows real talent and holds her own opposite more veteran thespians. Jay Duplass’s Damon is driven-to-find-wealth and is never satisfied, always wanting more no matter the jeopardy to Cee and himself. And that danger is the conman claim jumper Ezra (Pedro Pascal) who fills the bill as a likable bad guy. “Prospect” is a first-rate calling card for the filmmakers and it is easy to see that they have more to come.