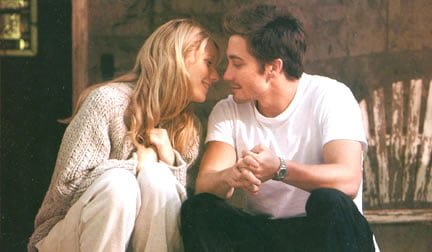 proof[n] (logic or mathematics) a formal series of statements showing that if one thing is true something else necessarily follows from it Catherine (Gwyneth Paltrow, "Shakespeare in Love"), the gifted, troubled younger daughter of math professor and recognized genius Robert (Anthony Hopkins, "The Human Stain"), quit her own life as a college student to care for her father as he descended into madness. After his death, she must contend with sister Claire's (Hope Davis, "American Splendor") concerns about her sanity and her father's student Hal's (Jake Gyllenhaal, "The Day After Tomorrow") faith in her ability. They're both asking her for "Proof."

David Auburn has adapted his Tony award winning Broadway smash for the big screen, and while he hasn't shaken the feel of its floorboards, his characters still come alive with complex relationships that hang in the balance of every exchange of his words. John Madden directs his former "Shakespeare in Love" star (Mary Louise Parker won a Best Actress Tony on Broadway for the role of Catherine, Paltrow played the role on stage in London) to tortured and troubled truths, Davis delivers the acerbic goods and Gyllenhaal has never been better. The film begins as Catherine glumly watches late night infomercials, cheered out of her depression by a 27th birthday visit from her dad bearing a bottle of cheap champagne. But is this an indication of her mental state? Dad is actually dead and Catherine is grieving, awaiting the arrival of her estranged sister. She also acts suspicious and paranoid around Hal, who is scouring the 103 notebooks her father left behind in hopes that a groundbreaking proof might be found among them. Hal is clearly attracted to Catherine, but when she finds one of dad's notebooks in his backpack, she overacts and calls the cops, only to discover he'd intended it as a birthday gift, as her father had written about his feelings for her in that particular volume. Claire arrives and begins to take charge, from purchasing Catherine's funeral dress to insisting she return to live with her in New York. Catherine makes an impromptu speech at Robert's funeral which shames his friends, Claire gets drunk at the gathering afterwards where Hal's math geek band is playing for the assembled. He ditches his drums to climb into Catherine's bed. The next day Catherine, in a post-coital glow, gives Hal a key to a locked drawer in her father's desk where he discovers a groundbreaking and revolutionary piece of work, but when Catherine claims authorship, even Hal is skeptical, throwing her into a defeated depression. The burden of proof is now upon Hal if he is to save the woman he loves her future freedom. Just what this mathematical validation will bring to the world is never addressed, but "Proof" isn't about the science of arithmetic as much as it is about the need for faith and the illogic of love in human relations. Madden and Auburn shape the material in such a way that even though we witness events from Catherine's point of view, we can never really be sure if she is suffering from the same illness as her father or simply being worn down from the drudgery of caring for a dementia patient and the grief of losing him compounded by Claire's obvious surety that she is not well. We do not witness the police responding to Catherine's call, but they tell Claire she was abusive and seemed disturbed. Hal seems to be on Catherine's side, but she is extremely hesitant in trusting him because she doubts his motivations. When he tells her 'If I produced one tenth of the stuff your father did by the time he was my age, I could write my ticket to any math department in the country,' he's expressing enthused admiration, but she thinks he may see her and her father's legacy as his potential meal ticket. When she finally does trust him, she expects total allegiance in return. In flashback, we witness Catherine's time with her father when he was convinced his 'machinery' was in high gear (the embarrassing physical details are recounted in Catherine's funeral speech but not depicted), we're given a parallel situation. Anthony Hopkins is coasting in this part, but his enthusiasm coupled with harsh demands do convince that he may be onto something, just as Catherine's finding inspiration from items in the refrigerator seems a little nuts. Hal's unique reaction to the predicament he finds himself in is an inversion of the proof - he seeks to prove how something could *not* have been the case, a technique lightly foreshadowed with the couple's disagreement on the fit of a dress. Auburn neatly balances his four characters, with Robert and Catherine's creative thinkers juxtaposed with the methodical Claire and Hal. "Proof's" locations are mostly relegated to the interior of the professor's rambling old house which epitomizes its academic setting. Located on a leafy street, it features dark, wood interiors adorned with heaps of books and exterior spaces populated with the type of neglected garden furniture that signals preoccupied owners. "Proof" is a puzzle, a detective story of the human mind where a young lover uses scientific methods to prove the intangible.

Based on the stage play by David Auburn, who also wrote the script, the “proof” of the title is the validation of a mathematical theory dealing with prime numbers. That’s all well and good but it is merely a device to hang a character study of a troubled young woman. Director John Madden (“Shakespeare in Love”) goes through the appropriate motions to bring the play to the screen but the end result is one where I felt little empathy for Paltrow’s Catherine. Proof” does try to break the limiting bonds of its stage play source material by bringing the outdoors, with Lake Michigan and the Chicago skyline, into the film. The interior scenes, where most of the movie takes place, can’t escape the staginess inherent in the kind of adaptation. Aside from the couple of crowd” scenes – Robert’s funeral and the post-burial bash at Catherine’s home – the bulk of the film is fully focused on Catherine. There are few interactions to be had when a Ph.D. candidate, Hal Dobbs, is allowed to go through Robert’s notes and her sister, Claire (Hope Davis), arrives from New York to take charge of things. He is the love interest and support mechanism for Catherine and she, Claire, is the domineering control freak sibling. Madden does a competent job with the adapted material, making scenes look good and Catherine look bad (no mean feat with Paltrow’s ethereal beauty), but the effort lacks emotion. Paltrow, who is center stage for nearly every shot, doesn’t stretch as the possibly crazy Catherine. She cries and screams when necessary but there is little in the character that I can identify with and I found I didn’t really care what happens in the end. The miniscule, principal supporting cast doesn’t have a great deal to do except hover around Catherine, waiting for something to happen. Anthony Hopkins, arguably one of the premier actors working today, could have phoned in his routine role as Robert. He is seen in flashback, with the occasional hallucination by Catherine, and shifts between normalcy and the dementia that increasingly plagued him in his last years. Hope Davis does a competent job as Claire and, though two-dimensional, plays the domineering sister very well. I just wonder why she doesn’t worry about inheriting her dad’s debilitating mental malady. Maybe it skips the shallow, self-centered members of the family. Jake Gyllenhaal does a yeoman’s job as Hal and tries to make the most out of his character. Proof” never gets beyond its stage roots with lenser Alwin H. Kuchler keeping things claustrophobic and dark to reinforce Catherine’s mental struggle. His camera spends lots of time, probably way too much, with close ups of Paltrow. Production designer Alice Normington does a decent job in making Robert/Catherine’s house a character with its academic clutter and Catherine’s slovenly, I-don’t-care-anymore habits. Proof” is one of those stage-to-screen ventures that should have been pondered over a bit more before being committed to. I guess if there’s a niche audience of insane mathematicians out there then it may make some money, but there’s no proof of that.