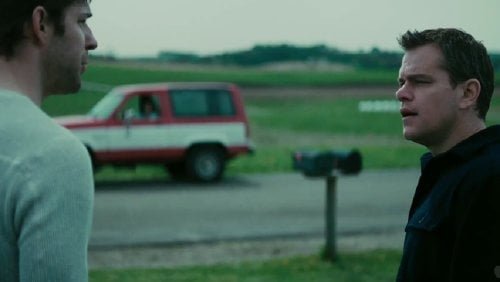 Natural gas corporation consultant Steve Butler (Matt Damon), a small town boy himself, ventures into the economic-stricken heartland of America to find properties ripe for drilling. He makes the sales pitch and starts to buy up lease rights to the land until a local high school teacher (Hal Holbrook) and an environmental activist (John Krasinski) get involved in “Promised Land.”

"Promised Land" is a well meaning film with a moral, environmental message on the current hot issue of fracking (drilling for natural gas deposits) and it's enjoyable enough largely due to its extremely likable cast (heck, I'd vote for Matt Damon for President if he'd run), but one cannot help but wish it had gone through some script tightening (the screenplay was written by costars Damon and John Krasiniski of TV's 'The Office'). Steve Butler is a character used to achieving his goals and thinking of himself as a good guy, so he's in for a bit of a shock when the farmers he thinks he's offering a financial hand to think otherwise. This seems more than a little naive. Steve's paired with a more experienced partner, played with gruff charm by Frances McDormand, yet we never know what side of this moral conundrum she falls on. I guess we're just supposed to see her as a decent enough sort just 'trying to do her job.' They both have meet cute romances and, oddly, its the one that's not meant to be that feels more real. But the film's biggest drawback is it's third act twist when we learn that one of the major players has been misrepresenting themselves. The only thing is that the tipoff to this is such a screenwriter's hack, a bit of sleight of hand that is supposed to make one gasp so that one won't stop and think about how totally idiotic it is, what utter lack of reason exists to explain its use, that it deflates everything that's come before it.

This was to be Matt Damon’s directing debut but schedule and creative conflicts prohibited this and Damon’s longtime collaborator Gus Van Sant took over helming chores with Damon in front of the camera. Damon and co-star John Krasinski penned the script from Dave Eggers’ original story and they come up with an environmental cautionary tale about the damages natural gas exploration can cause to the lives of the people of the land. “Promised Land” begins with friendly-faced Steve Butler and his partner Sue Thomason (Frances McDormand) coming to an economically strapped town with hope and, more important, dollars. They are successful, at first, and easily garner the signatures from the locals to begin the process of extracting natural gas from the land. Then, a high school teacher, Frank Yates (Holbrook), brings up the term “fracking” for the first time – using land-poisoning hydraulics to free the gas trapped underground – and the dangers to the environment, like contaminated drinking water, are exposed by Frank Yates. On the heels of this setback, environmentalist Dustin Noble (Krasinski) shows up in town and the public opinion against the gas company quickly+builds among the townsfolk. The very talented cast, led by Damon, has routinely drawn characters with nothing special to each. Steve Butler, for a company man on the fast track in the dog-eat-dog industry, is incredibly naïve and the potential environmental damage that fracking can cause seems like a revelation to a guy who should know better about this business. John Krasinski is a likable guy as noble Dustin Noble but harbors a secret gotcha. Frances McDormand could have phoned in her performance in. She is given little to work with in an undeveloped character that is not much more than a stick figure. I expect more from the screenwriters. For a film about fracking, the subject does not even come up until 27 minutes into the story. This time is spent developing the central characters and setting up the controversy about the environmentally-damaging gas extraction process. (For a more in-depth look into the fracking process and the damage it does see the 2010 documentary “Gasland”). “Promised Land” is more character driven story telling than cautionary environmental tale.