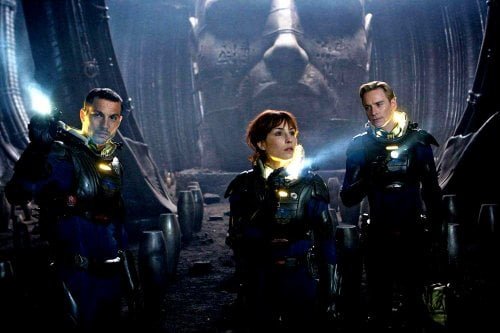 In recently rewatching the director's cut of "Alien," I was reminded how much director Ridley Scott adhered to the "2001" playbook - the huge ships floating through space accompanied by classical music, the 'space jockey' which could be considered a response to the star child, the android with a hidden agenda tipping his hat to HAL. In "Prometheus," he carries the connection further, looking for an explanation for life itself, but he and screenwriters Jon Spaihts ("The Darkest Hour") and Damon Lindelof ("Cowboys & Aliens") also hit every beat from "Alien" while messing about with the original mythology. Scott's reboot of the franchise is a technically glorious thing, shot in 3D instead of converted in post with sweeping widescreen panoramas, and Noomi Rapace gives a thoroughly engaging performance as a character quite different from Ripley, but you'll probably enjoy the film a lot more if you've never seen "Alien." The film begins with a prologue featuring aerial views of a seeming natural Utopia, lush verdant valleys and roaring waterfalls. We see a large, waxy white humanoid figure sample something from a jar, then begin to sicken, its veins turning black, its body tumbling over the fall and imploding as it sinks. The meaning of this will only be partially explained by the film, one of several pointers to a sequel. When we cut to Prometheus, we get a familiar scene of crew members motionless in hibernation pods. David (Michael Fassbender, "X-Men: First Class") stops by Shaw's and 'sees' one of her memories as a young girl with her father (Patrick Wilson), telling her that her mother's presence in heaven is what he chooses to believe in. We follow David about the ship where he does dexterity training with a bicycle and ball, learns ancient languages and styles himself after Peter O'Toole in "Lawrence of Arabia." The crew awakened, they are gathered by Weyland Industries' Meredith Vickers (Charlize Theron, "Snow White and the Huntsman") for a hologram presentation by Peter Weyland, who supposes he's no longer alive, outlines the mission and gives de facto command to Shaw and Holloway. In her posh private quarters, Vickers firmly retracts that last perception and states that no one will be trying to make contact with alien life forms. Shaw is gobsmacked. Captain Janek (Idris Elba, "The Losers," "Takers," "Thor") sets down in a valley which shows evidence of landing strips. Domed pyramids rise on the horizon. A team consisting of Shaw, Holloway, David, cheery biologist Millburn (Rafe Spall, "One Day," "Anonymous") and hostile punk geologist Fifield (Sean Harris, "24 Hour Party People") set out to explore the nearest one aided by 'pops,' glowing pink orbs which light their way and send a mapping of the tunnels they traverse back to the Prometheus. The group is startled by a hologram transmission which shows large suited figures running, one of whom collapses in front of a doorway. They find its decapitated body. David figures out how to open the door. What lies beyond would seem to support Shaw's theory. With an extreme storm threatening their ability to return to the ship, Shaw retrieves the decapitated alien head. David secretly retrieves one of the many metal cannisters arranged around the room much like "Alien's" eggs. Millburn and Fifield are stranded in the pyramid and come upon things the others did not. Except for the rationale for landing, things sound awfully familiar. An Android has a secret agenda. There's a dispute about allowing an injured/sick crew member back on board. Corporations are evil. An alien fetus is ripped from a human torso. An android is beheaded. Noomi Rapace runs around the ship in her underwear. All that's missing is a cat. Yet in ending "Prometheus" with some 'extra' thrills, Scott seriously rearranges his setup for "Alien" as regards one of its most iconic images. The alien life cycle in this one is willy nilly and its characters are underwritten with the possible exception of Shaw, whose celestial theory is. The film's big 'yuck' scene is thrown a wrench by the writers to increase suspense, but it's illogical - the information hints at another possibility, a later reveal, but if that was the intent, it's been clumsily done. God vs. science as regards man's creation is represented by Shaw's father's crucifix which she wears around her neck (she may choose to believe the same as he some day) and a Christmas tree aboard the ship. In Greek mythology Prometheus was a titan who stole fire from Zeus and gave it to humans, punished for this by being bound to a rock where an eagle ate his liver every day. He also went on to sculpt a man from clay. Heady ideas for the genesis of a reboot that both clings to history while not respecting it. Still, the film works well as summer entertainment, has flawless techs and proves Rapace can carry a film internationally.