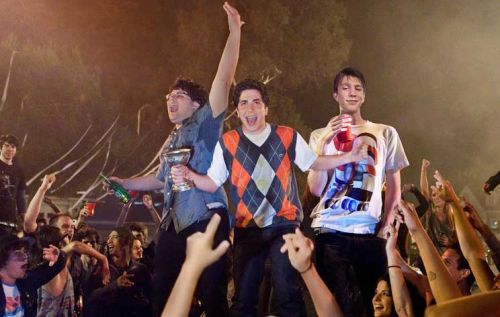 Thomas Kub's (Thomas Mann) parents will be away on his 17th birthday which is all the excuse he and his buddies Costa (Oliver Cooper) and JB (Jonathan Daniel Brown) need to change their high school status from unknown to megacool by throwing the party to end all parties with a plan they call "Project X."

Ever since 1983's "Risky Business," (or even arguably 1978's college set "Animal House") the high school party run amok and variations on that theme have been a staple, rejuvenated for the current generation by Judd Apatow with 2007's "Superbad." There have been films good, bad and mediocre in between, but "Project X" may set a new low in what's supposed to pass for humor. As written by Matt Drake ("Tully") and Michael Bacall ("Scott Pilgrim vs. the World"), the directorial debut of Nima Nourizadeh jumps on the found footage bandwagon, so recently exploited with freshness and originality in the high school set "Chronicle," with all the relevance of a "Girls Gone Wild" video. And it gets worse. The three unknowns who star are all easily recognizable types. Thomas Mann's central Thomas Kub is the sweet wallflower and Mann succeeds in creating a likable character amidst this dreck, so the kid probably has natural talent and a future. Cooper's the obnoxious mastermind Costa and Brown is a young Josh Gad stand in. Their cameraman documenting the event for posterity is Dax (Dax Flame), although the 'film' also includes 'footage' shot on phones, from newscasts, etc. So, before they leave, Dad (Peter Mackenzie), who assures Mom (Caitlin Dulany) it's safe to leave their son alone as he's such a loser he won't create any trouble, tells Thomas that his Mercedes is strictly off limits. That's dad's Mercedes parked at their house. Which has a swimming pool. As soon as they leave we're briefly treated to a day at high school where the trio isn't exactly bullied, but treated with disdain, except for childhood friend Kirby (Kirby Bliss Blanton) who's gorgeous in a girl-next-store way. Then Costa begins intense party planning which includes a trip to see T-Rick (Rick Shapiro), the unbalanced drug dealer who lives on the outskirts of Pasadena. They steal his garden gnome as a party mascot and he is disproportionately displeased. It's pretty easy to see where all this is headed, but it's taken to jaw-dropping levels which includes animal jeopardy (the Kubs family dog, Milo, a cutie who provides one of the film's funnier moments in a throwaway cutaway to the bounce house), people and cars in flames, rioting, the destruction of an entire neighborhood and a bankrupt father Kub standing in the shell of his former home expressing admiration that his son had more cajones than he thought. A 'Little Person' (Martin Klebba, TV's 'Scrubs') is stuffed into an oven and the end credit cappers imply that Dax, costumed in a black trench coat(!), may have killed his parents. Are we laughing yet? This thoroughly offensive and irresponsible film spends most of its time ogling teenaged girls frolicking topless in the pool or looking up their skirts as they climb stairs when it's not celebrating rampant destruction. And even that's not original. The trio spend time surveying their epic party from the roof a la "Almost Famous" and zip line into the pool a la "The Social Network." Freshmen are thrown out of the party, but 'security' is hired in the form of Tyler (Nick Nervies, HBO's 'Curb Your Enthusiasm,' one of the film's few bright spots) and Everett (Brady Hender, "Infamous"), two minority tweeners. An outraged neighbor sucker punches one of them in the face. If the film weren't bad enough already, the character of Miles is introduced in the pre-party stages and barely defined as some kind of baseball legend. Miles Teller (many of the actors retain their own names) proved his talent and charisma in "Rabbit Hole" and last year's "Footloose" remake only to get lost in this crowd?