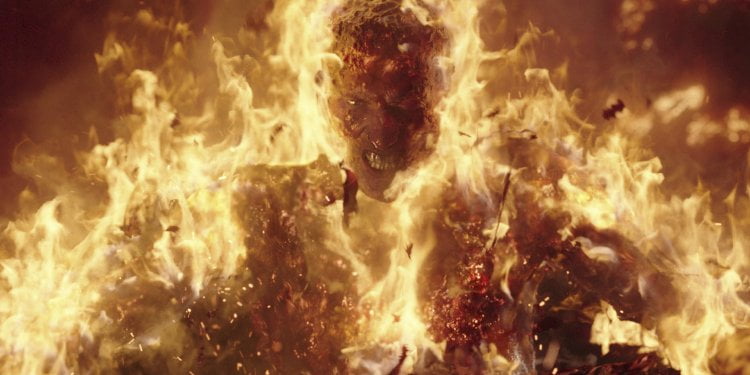 Young schoolgirl Robin (Dominique Fishback, HBO’s ‘The Deuce’) sells it on the streets of New Orleans because of her mom’s medical bills.  NOPD cop Frank (Joseph Gordon-Levitt) befriends her, using her wares to fight it and trying to locate their source before it destabilizes his city.  But the one who knows the most about it, a man known as The Major (Jamie Foxx), will kidnap Robin and be fingered as the enemy by Frank’s Captain (Courtney B. Vance) who just may be colluding with Teleios’s “Project Power.”

With his “The Batman” coming next year, writer Mattson Tomlin gives us a preview of his ability to spin the Super Hero genre in new directions.  Unfortunately, under the direction of Henry Joost & Ariel Schulman ("Catfish," Paranormal Activity 3 & 4"), the mythology is muddled and presented with murkily edited (Jeff McEvoy, "Nerve"), dark imagery (director of photography Michael Simmonds, "Paranormal Activity 2").  What it does have is a breakthrough performance from Domique Fishback, shouldering the film charismatically alongside Foxx and Gordon-Levitt, the latter of whom brings some much needed humor to the proceedings.

A prologue features main supplier Biggie (Rodrigo Santoro, "300," "The 33") pushing the glowing capsules – for free – on an incredulous bunch of New Orleans street hustlers at 3 a.m.  Robin will get mugged by three older boys as she tries to sell a capsule for $500, but Frank comes to her rescue just in time.  His handcuffing of Robin is a mere ruse, as once the thieves have scattered, he presents her with a motorized bike from impound and gives her the cash for her ‘power.’  Meanwhile we’ll see a mysterious man (Foxx) track down Newt (Colson Baker/Machine Gun Kelly) to a shabby apartment complex and break in.  There are cartoon-like holes in the walls and in the floor, which will be explained when Newt swallows a Power capsule and turns into a human fireball.

On the whole there’s a little too much going on in “Project Power” which leaves the vast conspiracy that drives it without enough oxygen.  Wisely, the three main characters are given enough time to develop, but then they’re short shrifted with an inexplicable distrust that is all too quickly remedied.  Some of the film’s effects are impressive, like Newt’s fiery disintegration or a chameleon-like bank robber, but then we learn the powers, which are unique to each individual and either last for five minutes or kill the pill popper, are based on the natural characteristics of animals.  I’m having a hard time recalling one that is bulletproof, turns into a fireball or breathes ice.

Fishback, impressive as a supporting player in ‘The Deuce,’ commands here as the quiet yet defiant would be rapper who fiercely cares for her mother Irene (Andrene Ward-Hammond, "Just Mercy").  We understand why Gordon-Levitt’s Frank favors and protects her, and if it’s a little tougher bringing Robin and The Major to common ground, Fishback and Foxx’s dance builds believably from kidnapper and victim to vigilante hero and accomplice.  While Robin’s rapping aspirations are worked into the overall awkwardly, Fishback’s demonstration of Robin’s skills makes for one of the film’s best scenes.  Gordon-Levitt’s pantomime of being her (flabbergasted and unsuspecting) mother’s lover to run off fake cops is a master class in comic timing, both verbally and physically.

But the film itself just feels haphazard.  Take, for example, a scene in which Frank follows a couple into what will be a secret demonstration to wealthy world players by Biggie.  We have no idea how he knows to follow that couple and once the mayhem starts, the location is suddenly empty but for The Major and his now gigantic nemesis – where did everyone go?  The shipboard climax, featuring Teleios bad guys Gardner (Amy Landecker, "A Serious Man") and Wallace (Tait Fletcher, AMC's 'Breaking Bad'), might make more logistical sense but there is no reckoning in its aftermath.

“Project Power” plays something like 2011’s “Limitless” crossed with “X-Men” if, with the exception of its cast, it was intended as a drive-in B feature.  That cast, though, is worth popping some corn for.

There is a new drug on the streets of New Orleans and it is not your ordinary high. For the meager sum of just $500, you can have a super power for five minutes. The only problem is, that super power is unpredictable, possibly deadly and nefarious corporate powers want to control it and they must be stopped in “Project Power.”

A sci-fi story about a pill that gives you super power, a Ms. Big bad guy bent on taking over the world and a team of misfits who join forces to put a stop to it should be, at least, entertaining. After all, it stars Academy Award winner Jamie Foxx, Joseph Gordon-Levitt and the up-and-coming Dominique Fishback.

But, I think the problem we have here is that there are too many things going on. First off, there is an illegal drug that gives the taker five minutes of a super power. The unpredictability of what that super power is would seem like an idea to explore in “Project Power.” Instead, besides the looming epidemic of super powered people intent doing bad things, there is The Major’s (Jamie Foxx) story about his kidnapped daughter, a drug dealer named Robin (Dominique Fishhook) who works with a crusading cop bent on bringing down the corporate drug kingpin (queenpin?) I named Ms. Big (Amy Landecker).

There is a lot of talent in front of the camera and a group of skilled special F/X techs making the visuals of the various powers on display interesting. But, a more thoughtful story that has focus would have been a better use of the well-done techs. Dominique Fishback gets to give dimension to her tough and capable Robin, but the rest of the talented cast is wasted, along with the F/X.