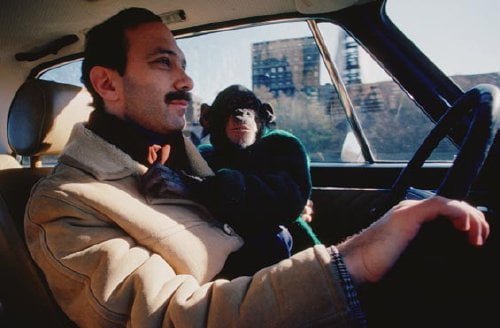 Documentary filmmaker James Marsh won an Oscar for his nerve-wracking “Man on Wire” about the man, Philippe Petit, who walked a tightrope stretched between the World Trade Center towers in 1974. Marsh changes his focus from human to ape in his study of the first chimpanzee to learn to speak to man in “Project Nim.”

This remarkable documentary appears to be about an experiment in animal behavior research in the 70s where the title character, a baby chimp named Nim Cimpsky, is placed in a human household to see if the little ape can learn to speak sing language. But, Marsh explores much more as he tells of the life of both Nim and his human handlers and the impact each had on the other. One thing that “Project Nim” makes abundantly clear: the study was developed and run by amateurs. These dedicated individuals – and there are many who crossed paths with Nim – may have been experts in linguistics, speech and sign language but they were babes in the woods when it came to understanding chimpanzee behavior and little research was done. This is telling when the researchers are surprised to learn that a chimp is five to six times stronger than a human and a full grown Nim would weigh in at 150 pounds! Nim’s surrogate mom, Stephanie LaFarge, shows the battle scars from even when the chimp was very young. The lack of understanding about chimpanzees resulted in Nim, from a species of animal that forms clans and is very social, being isolated from any normal simian interaction. The cruelty of this well-intentioned but naive action by the Columbia University researchers, led by Herbert S. Terrace, affected the research that set out to prove that apes can speak. Nim learned 125 signs but never learned what is called “double articulation” where the little ape is able to understand reversed words like “man bites dog” and “dog bites man.” Nim lived for 27 years and spent all of his adult life in captive isolation when his strength and inherent wildness became dangerous. He was never allowed to join his fellow chimps. This is the real story in “Project Nim.” It is a heartbreaking tale of the naïveté of the people around Nim who knew little about the species. This sad, informative film is a high-quality documentary and another feather in the cap of James Marsh.