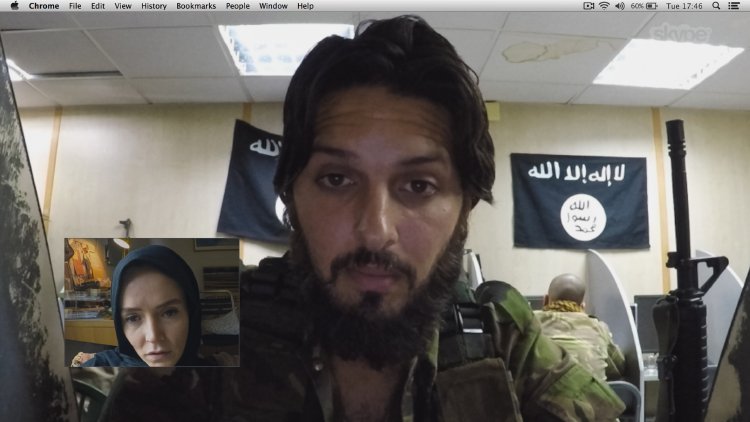 In 2014 after many young Britons leave the UK to become jihadi brides, a journalist, Amy (Valene Kane, TV's 'Gangs of London'), is determined to find out why.  After friending a number of these women on Facebook, Amy, calling herself ‘Melodie,’ shares a video of a gay man being pushed off of a roof and is shocked to be immediately messaged by the man behind it, Abu Bilel Al-Britani (Shazad Latif, "The Commuter"), who sets right to work seducing the woman in the “Profile.”

Cowriter (with Britt Poulton and Olga Kharina)/director Timur Bekmambetov ("Night Watch," 2016's "Ben-Hur"), who kicked off the Russian trend of hyperactive cinema now seen in the films of Kirill Sokolov (“Why Don’t You Just Die!”) and Ilya Naishuller (“Hardcore Henry,” “Nobody”), would seem an odd choice to adapt the 2015 nonfiction bestseller "In The Skin of a Jihadist," but we can see his style all over the computer screen film.  For one thing, anyone not conversant in all manner of social media and apps will have trouble keeping up with Amy’s flying fingers and continuous screen flipping.  And while the book portrayed its ISIS recruiter as acting something like a teenager with his use of emoticons, Bekmambetov’s characters often feel cartoonish, his protagonist too gullible.  Still “Profile” does do a respectable job illustrating ISIS’s techniques and it works as fast-paced entertainment.

Amy interacts with several people throughout.  When her friend Kathy (Emma Cater) IMs, asking her what she’s doing, Amy responds ‘Making friends with jihadists.’  The journalist’s fiancé, Matt (Morgan Watkins), is trying to get agreement on an apartment for them to move into together.  Amy has a mini-meltdown when her editor Vick (Christine Adams, who also played an editor in "The Unholy") assigns a Muslim, Lou Karim (Amir Rahimzadeh, TV's 'The Heights'), to work with her in securing video of her Skype sessions with Abu Bilel, convinced he may be the enemy (he’s actually anything but, guiding her away from potential trip-ups throughout her chats).  Bekmambetov uses Amy’s barreling shifts from IM to email to Skype to YouTube to document retrieval, etc., to increase our anxiety, just waiting for her to inadvertently expose her true identity to Abu Bilel.

It’s not long before the good-looking Abu Bilel, whose avatar is a lion and who sprinkles his communiqués with kitten gifs, has asked ‘Melodie’ to come to Syria and marry him, giving her a tour of the luxurious house that will be hers and lying suggestively on a large, plush bed.        He’s delighted when, offering her her heart’s desire, she responds with ‘a Kalashnikov,’ pronouncing it haltingly with girlish submission.  This demeanor also enables her to drop calls ‘accidentally,’ when she needs to consult with Lou or look up information, but when Abu Bilel’s flirtations begin to get more sexually aggressive, she drops Lou as well, then begins to make arrangements to actually leave London.

This is the only occasion where Bekmambetov cheats on his concept, showing us Amy arriving in Amsterdam from a surveillance camera not feeding to her laptop, an unnecessary lapse, just as her building feelings for the terrorist stretch credulity.  Kane is otherwise solid in the role, especially as a woman trying to appear 10 years younger to her mark.  Latif is very convincing as the alluring Arab and Rahimzadeh is a great counterpart in acknowledging his danger.  Cater’s presence is usually a humorous break from the main action, representative of the banality of the London nightlife.  Watkins’ performance builds from one of everyday check-ins to increasing suspicion and annoyance with his fiancee’s evasions.

“Profile” may use a real life incident for its inspiration, but what you’re getting follows the Bekmambetov-produced “Unfriended’s” playbook with terrorism as its horror hook.  This one’s story and protagonist may be more worthwhile, but the gravity of the real life situation is undercut by the filmmaker’s more sensationalistic impulses.