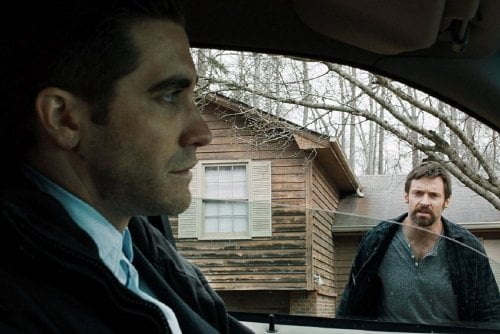 It's Thanksgiving and the financially struggling Dover family spend it with their more upscale neighbors, the Birches, just down the street. After dinner, six year-old Anna Dover (Erin Gerasimovich) asks if she can bring Joy Birch (Kyla Drew Simmons) back to the Dover home to search for the emergency whistle her dad got her. When they haven't come back hours later, Ralph Dover (Dylan Minnette, "Let Me In") remembers a strange RV the girls tried to play on when he and Eliza Birch (as Zoe Soul) had taken them out for a walk earlier. There was somebody in there and when Detective Loki (Jake Gyllenhaal, "Source Code," "End of Watch") finds Alex Jones (Paul Dano, "There Will Be Blood," "Ruby Sparks"), the man tries to run. Two days later, Loki's advice based on Keller Dover's (Hugh Jackman) absolute conviction that Alex is their man, is ignored by Captain Richard O'Malley (Wayne Duvall, "Lincoln") who releases him for lack of evidence and everyone's escalating fears make them figuratively and literally "Prisoners."

Working with a script by Aaron Guzikowski ("Contraband"), French Canadian director Denis Villeneuve takes many of the themes from his powerful 2001 film "Incendies," and fashions them into a highly commercial thriller. Shot in the hues of a cold rain by Roger A. Deakins ("No Country for Old Men," "Skyfall"), the film's missing-child-in-a-close-knit-community-with-secrets story is reminiscent of "Mystic River" while the police investigation in a rural blue collar town has the flavor of "Silence of the Lambs." If the screenplay occasionally frustrates by not asking obvious questions (Alex's attempted escape looks more like a suicide attempt, for example) and by scattering red herrings that venture into really loopy territory (snakes?! - we're in serial killer novelist James Patterson country), the film overall works because of the filmmaking artistry and high acting calibre on display. Villeneuve uses three scenes to set up his characters. Keller takes son Ralph on his first hunting trip (the man's a survivalist, anticipating his distrust of the police). The easy camaraderie of the Birch/Keller Thanksgiving is intercut with Loki eating alone at a Chinese restaurant. When the families intersect with the detective, Franklin (Terrence Howard, "Lee Daniels' The Butler") and Nancy Birch (Viola Davis, "The Help") are expectedly distraught, but Keller's intense desire for immediate action puts Loki on alert. Grace Dover (Maria Bello, "Beautiful Boy") falls into a deep, drugged depression, taking to her bed (and mostly out of the action). Loki is frustrated when a search of the RV turns up nothing and his anger when Alex, who has the mental development of a ten year-old, is released is justified as Keller attacks the boy outside the police station. Only Keller hears the boy whisper 'They only started crying when I left them.' So he parks outside the Jones home that evening and is further convinced when Alex takes his Aunt Holly's (Melissa Leo, "The Fighter") dog out for a walk, hangs the animal by its leash, then begins to sing the same childish ditty Anna and Joy sang two days prior. Keller takes the boy at gunpoint and chains him up in the abandoned apartment building he owns, determined to inflict pain until he gets answers (torture was also prominent in Villeneuve's prior film, but here he leaves the audience to wrestle with its rationalization). Meanwhile, Loki, assailed from every side, is determined to find these girls despite Keller's lack of faith. He visits the woman who used to own the home that RV was parked in front of, herself the victim of a twenty-six year-old child napping. He visits known area sex offenders and finds something gruesome at the home of an alcoholic priest (Len Cariou, "About Schmidt"). He chases a suspicious individual (David Dastmalchian, "The Dark Knight") who attends a candlelight vigil, later identified by a checkout clerk as a man who frequently buys children's clothing. At 153 minutes, "Prisoners" actually feels like it could have used a bit more time to flesh out its decades long crime. The Birches, who become involved in Keller's scheme, fade out of the action, acting more as commentary than characters, despite the fine actors portraying them. Maze imagery is significant, then never truly worked into the plot. Tattoos on the hands of Keller and Loki connect them, but the latter's history ties him more to the victims of his case. Still, the filmmakers get across the the myriad ways people react under pressure and the tough job of connecting investigative dots while presenting us with all the information Loki needs. Gyllenhaal gives a quiet, focused performance that radiates the weight of the world, but not world-weariness. He's committed and heroic yet championless. Jackman portrays a man already feeling pushed into a corner whose helpless rage knows no bounds when his most precious asset is threatened. Dano's played plenty of weirdos, but the high-pitched whinny which occasionally emits from the shell he's drawn himself into engages sympathy. Leo paints a distrustful outsider, an abandoned woman living a hardscrabble life. The cast is mostly solid, although Duvall is too broad an uncaring incompetent and the young girls are clearly inexperienced, Drew Simmons pulling us out of a climatic moment. "Prisoners" may anger those who like their endings neat and tidy, but as left by Villeneuve, it packs one heck of an ironic wallop.

The docu follows Kurt Gerron’s remarkable career as a Cabaret and theater star during the lively bustle of Berlin in the 20’s. This city full of music and nightlife is the fertile ground that spawned the artist professional as he rose to the top of his craft in acting and directing. As Gerron’s prominence increased so did that of another man of grand ambition – Adolph Hitler. The Jewish Laws handed down by the new German chancellor where Jews are decried by law to be second-class citizen, losing rights and possessions. Gerron, as a result, was ordered off the set of his latest film by Nazi officials and was forced to flee to Paris, leaving all that he owned to the fascists. Gerron, penniless, searched in vain for theater and film work in France. He ignores the cautionary advice about the Nazis from his colleagues, such as Joseph von Sternberg, Fritz Lang and Peter Lorre, whom Gerron raised funds to send to America. The great actor and filmmaker was forced to move to Amsterdam where he achieved a modicum of his old success – until the Nazis invade Poland, then the rest of Europe, including Holland. Suddenly, the dreaded Laws apply to all of occupied Europe and Gerron is relegated, by his masters, to perform at Amsterdam’s Jewish Theater. Then, in 1942 Hitler’s henchmen met at a lakeside conference in Wannsee, Germany and, in 90 minutes, decide the ultimate fate for Europe’s Jews - the Final Solution. During the third act of Gerron’s latest play, a bemedalled Nazi officer appears, taking inventory of the theater. The next day, when Gerron and company arrive for rehearsal, their theater is in shambles and the officer announces that it is the new Transportation Center for Jews. The actor/director and his colleagues are eventually shipped to the concentration camp at Theresienstatd in Czechoslovakia. The camp became the way station to death for the wealthy, celebrity, intellectual and artistic members of Europe’s Jewry, those whose disappearance would be most noticed by the rest of the world. The presence of the famous inmates of Theresienstatd leads the Nazis to cook up a sham to convince those outside of the Reich of their good intentions toward the Jews. When the International Red Cross, reacting to the demands by neutral countries, requests inspection of a concentration camp, the Nazis are happy to comply. They dress up the façade of the old city turned prison, planting flowers, dressing up the inmates and showing all is happy and prosperous, leading the Red Cross representative through a carefully choreographed tour of the Theresienstatd camp. The ruse works. So successful is the lie that the camp wardens hold a contest for a screenplay to show how wonderful life is in the Theresienstatd, with the finished film distributed to the neutral nations. The first attempt at the documentary, by the young woman who wrote the treatment, is terrible, an indictment of the Nazis. She is executed. The camp commandant selects Kurt Gerron to make the documentary, demanding that it show the wonderful treatment of Jews under Nazi “care.” He takes on the task of creating a whitewashed depiction of the happy, healthy inmates eating bread and butter and playing music and dancing. But, the filmmaker’s desperate effort, in his mind a betrayal of his people, to survive come to naught and, on 28 October 1944, Gerron and his wife were executed in the gas chambers of Auschwitz. Clarke and Sender chose a unique subject in Kurt Gerron for their Oscar-nominated work. They collect a bevy of still shots of the actor and director, clips from films such as “Blue Angel” with Marlene Dietrich, and many interviews with Gerron’s contemporaries, colleagues and surviving family. Although Gerron’s own insights to the times are not documented, the viewpoints of others helps build a look at a man of talent, compassion and kindness. They discuss his humane help, often monetary, to others to escape the Nazi oppression while he repeatedly fails to heed the same warnings – to fatal ends. The documakers gathered previously unseen footage of the period and weave together the story of Gerron’s life and times, his success and Nazi-imposed failure and, ultimately, his death. When he is chosen to direct the mock documentary of the life of the Jews under the Nazis, Gerron sought the advice of the camps Jewish council of elders who recommended that he “do whatever it takes to survive.” Even with this support from his own people, Gerron still agonized over his possible betrayal of his fellows. The finished film never saw the light of day outside of Nazi Germany. “”Prisoner of Pleasure” is a different look at the victims of the Holocaust through the story of a talented, popular actor and director who died at the hands of his Nazi captors because of the sole fact that he was a Jew.