Prisoners of the Ghostland 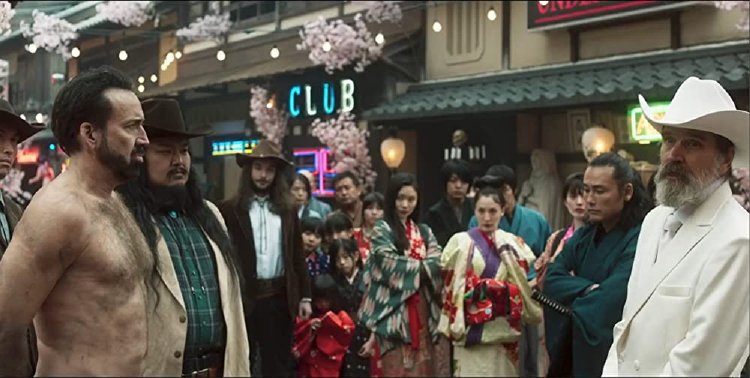 When an armed bank robber (Nicolas Cage) sees his partner, Psycho (Nick Cassavetes, "Face/Off"), aim his weapon at a child offering gumballs, he intervenes but is knocked unconscious.  Over a decade later, the tyrannical ruler of Samurai Town, The Governor (Bill Moseley, "The Texas Chainsaw Massacre 2"), frees the man from his underground cage to bring back his escaped adopted ‘granddaughter,’ Bernice (Sofia Boutella, "Atomic Blonde," "Climax"), while fitted out in an explosive leather suit with a clock ticking down.  The man will become known as Hero when he ends up leading a revolt for the “Prisoners of the Ghostland.”

It shouldn’t surprise anyone that the pairing of cult Japanese director Sion Sono ("Suicide Club," "Cold Fish") and America’s favorite unclassifiable actor results in a deliciously bonkers B movie.  The post apocalyptic, dystopian world of “Prisoners of the Ghostland” has its roots in “Mad Max,” but its cowboys and samurai mashup resembles everything from “Return to Oz” to Takashi Miike’s “Sukiyaki Western Django.”  Sono’s created a frontier town that looks like it was art directed out of a Chinatown five and dime, one whose denizens toss colorful balls, carry pinwheels, wear plastic masks and wander amidst floating soap bubbles.  This all fits Cage, of course, like The Governor’s snug red gloves and while he plays it straight, he manages to get a lot of laughs having a testicle blown off.

Samurai Town’s Geishas seem quite taken with the bank robber who’s brought into the street clad in a sumo loincloth, one of them drawing his portrait, then amending it when he strips naked to don that black leather jumpsuit (‘I’ve seen better’ sniffs the only woman unimpressed).  The Governor, clad in an all white suit, white cowboy hat and boots, seems to have thought of every angle assuring Hero’s return.  There are explosive devices on each arm of the suit in case he thinks of hitting Bernice, two at his crotch for obvious reasons and two at his throat.  Bernice will need to talk into a wristband he wears in order to activate two days for their return.  Overall he has five days for his mission, otherwise all detonators will be activated at once.  So what does Hero do?  He gets out of the souped up black Toyota he’s been provided and rides off into the desert on a bicycle.  His rashness will be tempered by The Governor’s enforcer, Yasujiro (Tak Sakaguchi, "Why Don't You Play in Hell?"), who follows him and tosses him the keys.

It takes little time for Hero to be captured by Rat Man and his Rat Clan and taken to the Ghostland, which is what’s left of a town after a toxic nuclear accident, its residents in thrall to its giant clock (Tik Tok).  An Englishman, Enoch (Charles Glover), reads passages from ‘Wuthering Heights’ in a 3 sided room and a Eurasian man in a top hat and tails controls a group of walking mannequins.  Hero begins pulling off pieces to view the people inside and voila – Bernice is among them.  Alas, she has no voice.  Then who should arrive but Psycho, a toxic avenger leading a group of zombies in striped and orange jumpsuits who is humorously acquiescent to Hero’s desire to help people.  Meanwhile, back in Samurai Town, The Governor is terrorizing Bernice’s ‘sister’ Suzie (Yuzuka Nakaya) by insisting she sit in his lap when he’s not ordering Yasujiro to behead traitors.

And yes, “Prisoners of the Ghostland” features plenty of gore, from Hero holding up his bloody testicle for all to see (after his last amorous inclination toward Bernice) to heads exploding inside Japanese paper lanterns.  Writers Aaron Hendry and Reza Sixo Safai, both actors with few screenplay credits, clearly favor flavor over logic as they wend their way to the East-meets-West showdown we all expect while not knowing which side one of its participants is on.  Thank goodness for the myriad talents of Nicolas Cage because Moseley, so effectively chilling in “The Devil’s Rejects,” seems like he’s just trying to get out of the shot as the climax builds, a poorly directed coward.  “Prisoners of the Ghostland” is choppy and nonsensical, but it’s Sono’s world and Cage is living it up in it.

A bank robbery goes amazingly wrong, ending in massive mayhem. The perp who led the steal, Hero (Nicolas Cage), is given one chance to live by the Governor (Bill Mosley), a warlord who rules Samurai Town with an iron fist – if he brings back his missing niece. The robber agrees to take that last chance in “Prisoners of the Ghostland.”

In this dystopian future world, the strong, in the guise of the omnipotent Governor, rule over the weak. When his adopted niece, Bernice (Sofia Boutella), runs away and hides out in the no-man’s world of Ghostland, he gives Hero his chance for freedom. If he can bring her back, he is a free man. But, there are two catches. One is he must wear a tight-fitting leather suit with explosives strategically placed (two are in the testicular area) that will go off if he tries anything else than rescue Bernice. The other is if he does not return in five days, the suit will explode anyway.
You had me when I found out that the great scenery-chewing Nic Cage stars in a post-apocalyptic world of legal lawlessness and a mission to rescue the special damsel in distress. Director Sion Sono takes on the story, by Aaron Hendry and Reza Sixo Safai, in his English-language debut and gives it a whole lot of style, with an extreme color palette and outrageous journey to a very strange world.

As I watched the story unfold, there is a lot of “attention” given to the other, similar dystopian worlds of “Blade Runner (1982),” “Mad Max Beyond Thunderdome (1985)” and John Carpenter’s “Escape from New York (1981).” Here, I think that imitation is the highest form of flattery.
One problem that I have with “Prisoners…” is that it immediately plunks you down in Samurai Town with no idea what the heck is going on. A little exposition in the beginning, like Decker (Harrison Ford) in the beginning of “Blade Runner,” would have taken away the need to figure out what world we are in – and pay more attention to the action, bright colors, strange worlds and a bevy of oddball characters.

While I came to see Nicolas Cage, I stayed for the entertainment value, surreal story and sets and all of its bizarre players. Besides the above-mentioned films, director-writer Sono also throws in a musical Greek Chorus to carry the “story” forward as Hero tries to fulfill his rescue mission and keep his extremities in one piece.

RLJE opens "Prisoners of the Ghostland" in theaters and on VOD and digital on 9/17/21.