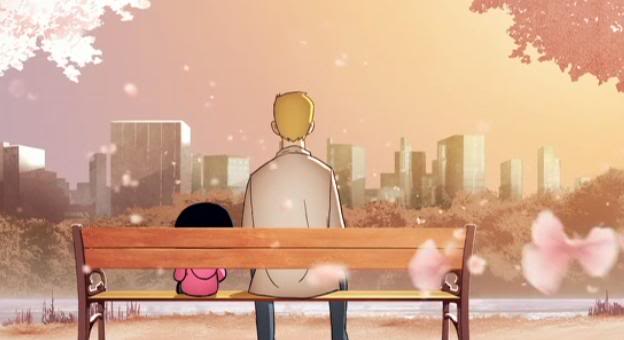 August (Thure Lindhardt) returns home to Denmark after years of missionary work abroad to claim his orphaned niece, Mia (Mira Hilli Moller Hallund). His sister, Christina (Stine Fischer Christensen), died of a drug overdose after a meteoric rise and fall in the pornography business. August takes in Mia as her protector but he takes her down a dangerous path of revenge to get those responsible for the death of the former adult film star known as “Princess.”

Uncle August (voice of Thure Lindhardt, "Flame & Citron") arrives at a brothel to claim Mia (voice of Mira Hilli Møller Hallund), the niece he's never met, after his estranged sister's death. Mia is a five-year old who has already observed a lifetime of disturbing activity because her troubled mother Christina (voice of Stine Fischer Christensen, "After the Wedding") was the hugely popular porn star known as "Princess." Danish cartoonist/animator/writer/director Anders Morgenthaler has made a provocative adult animation that illustrates how the porn industry has left the members of a whole family damaged. Using a mix of anime and live action video, Morgenthaler shows influences from Miyazaki to cinematic action/adventure films. "Princess" is a real disturbing dazzler. The film opens with a flashback. A priest, who we learn to be August, walks into an office where cables lead to a closed door that loud moaning can be heard from. He opens the door to witness a porn shoot where three men alternate having sex with a heavily pregnant woman. That woman appears in live action within an animated television, berating her holier-than-thou brother as she has sex off screen, before Morgenthaler blasts us with hard rock opening credits with Princess porn mags and DVDs rolling off assembly lines. In these brief opening moments, we know we're in the hands of a very talented filmmaker and can only hope the story doesn't devolve into seediness. And indeed, while the subject matter is sordid, the film never is. The realistically rendered August arrives to take the anime exaggeration that is Mia home, crossing swords with old brothel keeping Karen (voice of Margrethe Koytu), a grotesque parody of an old hooker with personality to spare. She criticizes August's non-way with children, gives him an unopened box of Cristina's and warns him that Mia's medical records make for some hair raising reading. She then gives little Mia a folded slip of paper and tells her she always has a home with her, should she need one. Mia's behavior, is, of course, odd. She is nonresponsive, slovenly and only eats cereal out of a box. But August starts to make inroads when he communicates with Multe, the stuffed rabbit Mia informs him is actually alive even though adults fail to see this. (Multe looks like a demented Pikachu if drawn by Miyazaki and is enlivened by the tinkling bell Morgenthaler has supplied him.) August opens the cardboard box to find a stock of videotapes, but they are not, as we would immediately think, Christina's pornos. Instead they are videos that August himself shot that chronicle their childhood, and the live action tapes provide the siblings' back story. Morgenthaler builds a history that establishes Christina as a handful from the get go, but that gradually makes August complicit in her fate and cross cuts this with a revenge tale, as August seeks to prevent Christina's old boyfriend, Charlie (Christian Tafdrup, "After the Wedding"), from making any more money off her with the porn company she helped him build. As Mia comes around to August and even begins to help him in his quest, disturbing reminders of what she has witnessed spring forth in her inappropriate and sexually provocative behavior with both him and children she attempts to play with. Morgenthaler visualizes a tale which combines elements of "Hardcore" with "The Velveteen Rabbit" with elements just as divergent, and yet the whole is seamless. A musical lamp illuminates flying birds around Mia's bedroom in one scene; Preben (voice of Tommy Kenter), Charlie's protective manager is murdered with a tire iron in another. The animator cuts from a childhood videotape showing Christina acting up in the family car's backseat to an animated car crash that is spectacularly cinematic. In a bit of eerie whimsy, Multe winks at August - later Multe is an indicator of evil and vehicle of revenge. A pornographic cemetary memorial built by Charlie to continue the cult of Princess is an eyesore waiting to be soothed. The artist's musical choices are just as varied as his imagery, ranging from Edith Piaf's English language version of "No Regrets" to "American Boy" by the Gnags. "Princess" is a collage of style about the corruption of innocence. It's a gripping piece of work.

This is a slowly paced anime/live action combination that is diatribe against the porno industry and its treatment of women, and a morality play, too. August, laden with guilt after he abandoned his sister and new born Mia five years before, comes back to try to make amends to his dead sister by caring for his niece. He is obsessed, though, with finding those responsible for her death and takes the girl and her stuffed companion, Multe, along on his mission of vengeance. However, the thing he wants to protect most, he inadvertently puts in grave danger – Mia. Director/writer Anders Morgenthaler (with co-scribe Mette Heeno) creates a somber, sad and, in the end, hopeful animation that is a kindred spirit to such Japanese anime as “Tokyo Godfathers” in look, if not feel. It does a good job in showing August’s anger and helplessness and Mia’s loneliness and hurt but its sullen tone hampers “Princess.” The live action is interspersed throughout the animation to show the title character’s rise to fame as a porno star and her mortal downfall with disturbingly graphic content, giving “Princess” its edginess. It was released theatrically in Denmark back in 2005 and took four years to come to the DVD market. I expected more by way of bonus material; however, the only extra to be had is the original theatrical trailer. This is not much to recommend buying but for the adult-minded animation fans, give it a go on rental.