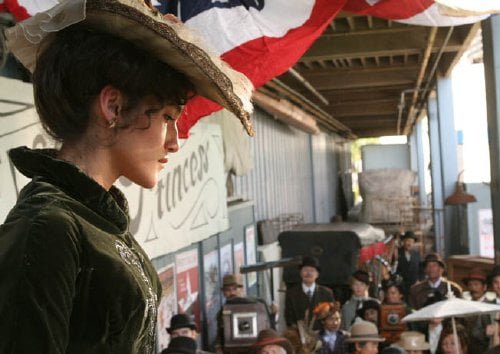 In 1889, just as a young Princess (Q'orianka Kilcher, "The New World") performs the lighting ceremony that introduces electricity to Hawaii, she is threatened by an uprising who wish to overthrow the monarchy and the constitution. Her father Archie (Jimmy Yuill), a Scottish financier, whisks her away from her beloved homeland for safety and an education in Victorian England, but years later, when she learns that her kingdom is being annexed by the United States, she begins a political crusade for her subjects, traveling first to the U.S., then returning home as her people's "Princess Ka'iulani."

Producer Marc Forby makes his writing and directing debut with the film formerly known as "Barbarian Princess" and the results are half stodgy educational docudrama and half harlequin romance. The Peruvian/Swiss Kilcher, whose apostrophe'd first name seemingly was a prerequisite for the role, is already becoming typecast as a misunderstood exotic who romances a white man while her culture and homeland are hijacked. Kilcher's reemergence makes one wonder whatever happened to Hawaiian born Shannyn Sossamon, who, although has current credits on IMDB, hasn't been widely seen since "Wristcutters: A Love Story" in 2006. Forby quickly ditches history in favor of a Victorian gothic romance, most of which appears to have been fabricated. Victoria Ka'iulani Kalaninuiahilapalapa Kawekiu i Lunalilo Cleghorn is placed in the home of Mr. Davies (Julian Glover, "The Young Victoria"), an Englishman with several Hawaiian sugar plantations to his name. She is immediately adored by Alice Davies (Tamzin Merchant, 2005's "Pride & Prejudice"), who becomes subservient to the haughty princess, and looked down upon by Clive Davies (Shaun Evans, "Being Julia," "Boy A"). We can see where this is going, but first 'Miss Cleghorn' must endure the belittling ministrations of her school's Miss Barnes (Catherine Steadman), mainly to show her humanity when the tables are turned years later. After accepting Clive's proposal (he's 'hopelessly' and 'desperately' in love with her), father returns to find out why she hasn't responded to his telegrams. Simple - they've been kept secret by Davies father and son to ensure the marriage. In a bit of staging indicative of this film, Ka'iulani tells dad to wait on an upstairs landing while she races about the house, finally confronting Clive in the downstairs kitchen. Poor dad is never heard from again, presumably still waiting. Forby does do a nice job portraying Ka'iulani's introduction to the New York Press. She starts off tentatively, but just as they are about to give up on her, she finds her voice and surprises them with her eloquence and her request for their aid in getting her an invitation to the White House. Once at the luncheon table of the First Lady, a surprise visit from President Cleveland (Peter Banks) means any talk of politics must be couched in metaphor and the future of Hawaii is discussed as the spicing of a chicken(!). While some of this is silly, one also wonders from whence Ka'iulani's political prowess has sprung as Forby hasn't given us a clue. We do get tidbits of little known, at least by mainlanders, Hawaiian history, which is rich enough to deserve better treatment than it gets here. After King Kalakaua (Ocean Kaowili) dies, his sister becomes Queen Liliu'okalani (Leo Anderson Akana) and immediately declares Ka'iulani heir to the throne, but despite a strong backbone, she's no match for the U.S. Military. (In broad strokes, Barry Pepper ("25th Hour," "Seven Pounds") represents the 'bad' while Will Patton ("Wendy and Lucy," "Brooklyn's Finest") is the natives' ally. One glowers, the other looks beneficent.) It occurred to me watching this sequence that Hawaii didn't stand a chance, its location denying it alliance with other countries, but a Wikipedia check reveals that Japan was approached, offering Ka'iulani as a wife to their prince for just such a purpose - Forby glosses over facts like these in favor of fictional romance. There is some late act interest when Ka'iulani is given an impromptu crowning ceremony while with U.S. delegates and when she succeeds in at least gaining full voting rights for her people. Clive returns with an offer, but no mention is made of her real engagement to a Hawaiian prince. The production features some stunning locations and beautiful costumes, but cinematographer Gabriel Beristain ("Street Kings") is besotted with the 360 degree pan and Forby with Kilcher on a white horse on the beach. The film's assembly is frequently ham handed. A pair of native twins given importance in the beginning are used in a battle flashback, then relegated to a footnote. The camera does love Kilcher, although it would be refreshing to see her cast in a completely different type of role. At least Forby ends on a poetic note, with Ka'iulani releasing the seashells which hold her memories into the Hawaiian surf.

First time feature film writer-director Marc Forby takes a little known bit of history, the true story of the struggle to maintain the Kingdom of Hawaii in the face of American colonization, and makes it a dull love story instead. Young Princess Ka’iulani (Q’orianka Kilcher) is at the center of keeping the Kingdom solvent and free. Unfortunately, the focus of the film only touches, in brief scenes, on this struggle and keeps its attention on the title character. The princess, for her protection and education, is shipped off to England where she falls in love with her host’s son, Clive (Shaun Evans). This, and her friendship with his sister, Alice (Tamzin Merchant), is the meat of “Princess K.” and it is an unsatisfying dish, indeed. Mark Forby tempts us with a little known history lesson of Hawaii but, instead, gives us a generic girl-power teen chick flick. That is not what I want to see.