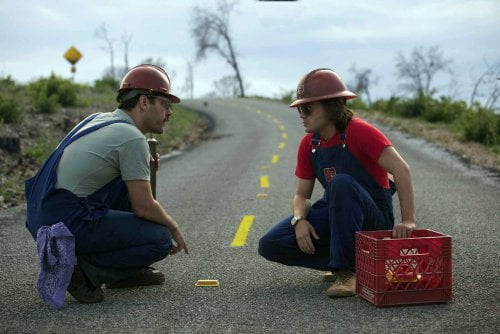 In 1987, 3000 acres of the state of Texas was devastated by forest fire. A year later, the clean-up of the destruction begins and includes reviving the roads running through the barren, ravaged land. Road workers Alvin (Paul Rudd) and his girlfriend’s brother, Lance (Emile Hirsch), are spending the summer camping out and laying down new road lines and warning signs in “Prince Avalanche.”

In 1987, a Texas fire destroyed 43,000 acres and left four dead. In this eerie, middle of nowhere landscape, Alvin (Paul Rudd, "Admission," "This Is the End") has decided to spend his summer repainting the yellow lines that divide the road. He's hired his fiancee Madison's younger brother Lance (Emile Hirsch, "Into the Wild," "Killer Joe") as his assistant, but Lance chafes against Alvin's rules until one weekend separates them and changes everything in "Prince Avalanche." Inspired by the landscape after fire swept through Bastrop State Park outside Austin, writer/director David Gordon Green ("George Washington," "Pineapple Express") found the story to place there after seeing Iceland's Hafsteinn Gunnar Sigurðsson's 2011 "Either Way." In remaking the film, Gordon Green has given Rudd a real character to flex his acting chops with and layered in a haunting ghost story that provides the basis for his character's reawakening. Alvin sees this job as a chance to get back to nature and expand his mind while making the money necessary to move himself and Madison to Germany. He's a truly odd duck, his behavior, thick moustache and letter writing suggesting a man from a bygone century. Unambitious Lance, meanwhile, only wants to blast music on their shared boombox and get laid. Unfortunately for him, he can do neither, Alvin having deemed his German language tapes above his own 50/50 cassette player rule. At night, tent pitched, Alvin fries up the fish he's caught, reads and writes. Lucas fidgets. Company comes in the form of a gregarious truck driver (the late Lance LeGault, TV's 'The A-Team') who stops and offers the guys some homemade moonshine. One gets the impression Alvin only partakes because it feeds into his perception of himself, rather than any real taste for alcohol, and the driver tells him he 'looks like an idiot' when he lights up a cigar. At the end of the week, Lance is ready for action and so he leaves with Alvin's cash-loaded letter to his sister for a weekend in town. Alvin stays for intensified solitude, but comes across an old woman (Joyce Payne) sifting through the remains of her home, hoping to find her pilot's license. When Lance returns, he's sporting a black eye, clearly troubled and finally opens up, telling Alvin his bid to win Maggie Johnston has cost him his friendship with Kip. When Alvin wanders off after reading Madison's return missive, Lance sneaks a peak and his transgression causes a major blow up. "Prince Avalanche" (the title came to Gordon Green in a dream) is a unique character study of two men who've lost their way, symbolically painting guiding lines through devastated terrain and how the filmmaker and his actors resolve their conflict is wholly satisfying, one 'road trip' of introspection birthing one of rejuvenation. Rudd's simply excellent here, such a fussy little man of strange manners, and it's nice to see him play something other than the man child rut he's gotten himself into lately. Hirsch, looking beefy enough to resemble Jack Black, is a fine foil and his own self realization may be even more surprising and moving than Rudd's. LeGault is a bracing eccentric with a mysterious connection to the woman Alvin finds amidst the ashes (Payne, a non-professional, is shown at the site of her actual lost house and is just perfect). Remember the opening informational title credit as the men drive off, passing three little children playing on the side of the road. Gordon Green won Berlin's Silver Bear for directing this film, perhaps a vote of encouragement to move away from his low brow commercial forays and back to his roots. "Prince Avalanche" has more than its own share of comedy (a hilarious chase scene), but it's also haunting.

David Gordon Green is one of those eclectic directors who can do comedy, drama and things in between. With “Prince Avalanche,” he tells a more melancholy story about two guys working the roads for the state. Alvin is very serious and eschews civilization, including his girlfriend Madison, in favor of the solitude of his job. Lance is his polar opposite, itching to get into town and party every weekend. This odd couple is often out of synch but there is a friendship deep inside. It is refreshing to see Paul Rudd do something other than romantic comedies. He inhabits his character, Alvin, and you get to know his likes, dislikes and many insecurities. He professes to treasure his solitude on the road but it is apparent that he is a lonely man who is hiding in his isolation. Lance is a more open book of emotions – lust being primary among them – and he lives more in the moment than his work companion. They are, indeed, an odd couple. This two-hander has one additional character (well, two but the other has ghostly qualities) that stands out and steals the show during his brief appearances on screen. Lance LeGault is a truck driver who drives the deserted roads for some reason not known. His meetings with Alvin and Lance are fueled with booze as he gladly gives them bottles of likker to ward off the cold of night. He is a colorful and amusing character and you wonder if he, too, is a ghost. Except for the occasional bickering between Alvin and Lance when they suffer from cabin fever, nothing really happens. You are watching a slice of life movie that is from the hearts of its director and stars. There is a natural flow as the two guys live together, eat together, drink together and, as their story unfolds, seem like an old married couple – except for Lance’s randiness, It is a quietly told story that, somehow, keeps you interested to the end, even when you know nothing is going to happen. Do not expect action and thrills, “Prince Avalanche” is not that kind of film.