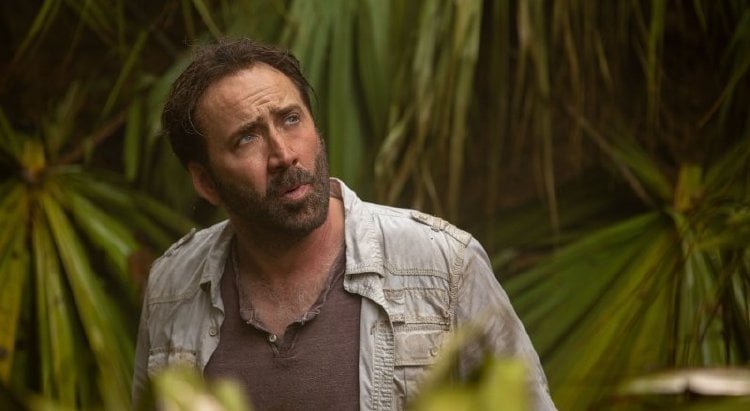 A guy sits in a jungle hunting stand eating snacks, smoking a cigar and reading a real estate magazine. Suddenly a large white blur attacks the stand, almost grabbing the great hunter, Frank Walsh (Nicolas Cage). He bests the rare beast with a blowgun and, along with the rest of his captured menagerie, board a ship bound for Puerto Rico. But, a very, very bad and dangerous man, Richard Loffler (Kevin Durand), is also being transported aboard the same ship in “Primal.”

Why is black market exotic animal dealer Frank Walsh (Nicolas Cage) reading a real estate magazine perched in his treestand? Because he's about to bag a rare white jaguar, an animal that will fetch him a million and fund a home on Pine Lake. But the locals won't help him transport the big cat to his cargo ship because of its sacred status. Then he finds out he'll be sharing passage with Richard Loffler (Kevin Durand, "Cosmopolis"), a psychopathic rogue special ops agent under heavy guard. When Loffler escapes, he unleashes most of Walsh's animals, including two lethally poisonous snakes, aboard a ship now gone "Primal."

When stuntman David Leitch stepped into the director's chair, the result was "John Wick." Unfortunately stuntman Nick Powell's promotion isn't as fortuitous, nor do we get “Mandy” level intensity from Nicolas Cage. This is a slapdash affair from television movie writer Richard Leder that cops from everything from “The Silence of the Lambs” to “Snakes on a Plane.” Most of the animals are rendered by subpar CGI and the one main exception – a scarlet macaw which has attached itself to an irritated Walsh – never gets the comedic payoff it so richly deserves.

If the film’s trailer promises ‘Nicolas Cage hunts a giant cat!’ the movie delivers ‘Nicolas Cage frets about feeding his animals with Hannibal Lecter on the loose.’ There’s a little kid sidekick. Dr. Ellen Taylor (Famke Janssen, looking like the victim of an overly aggressive face lift) is a Navy neurologist purportedly on hand to monitor Loffler’s inability to handle pressure changes (explaining why they’re not on a plane) but really around to be held captive. I can’t even remember the relevance of Paul Freed (Michael Imperioli, HBO's 'The Sopranos') other than to note how much Christofa has aged.

Cage plays this one mostly straight, neither phoning it in nor going over the top. The latter is left to Durand, a great character actor who, frankly, is above this nonsense but fun to watch nonetheless. Still, the story is such a patchwork of other genre films it makes the act of watching seem like going through the motions. The effects are so shoddy that at one point when the ship reverses course it looks like a model on a stick has been spun around.

There are worse movies than “Primal,” even ones starring Cage, but this one disappoints more with the cheesy promise it proffered. Save it for late night cable or distracted streaming.

Stunt coordinator turned film director Nick Powell, with scripter Richard Leder, have two movies going on here. One is about Frank, his capture of a near-mythical white jaguar and his job catching and porting of wild, exotic animals to the world’s zoos. His latest capture, though, is the mother lode and he plans to make big bucks from his golden goose and retire in luxury.

The second story is about how Frank’s grand plans are put in deadly jeopardy when he learns that Loffler, a renegade special ops gone rogue, is brought onto the ship under heavy guard. The smart-aleck killer, though, does not seemed too concerned about his pending incarceration, with good reason. The one-man army takes on his captors and uses Frank’s collection of critters, including the 400 pound jag, to wreak havoc on the ship, causing most of the crew to abandon the freighter.

So, we have an evil human killing machine free on the ship wreaking mayhem on his guards one by one. He sets free the slew of wild animals to increase the fear and confusion – who wants a killer jaguar roaming the ship? Loffler, an expert in all things warrior, sabotages the ship controls, making it go in circles. Throughout all of the confusion, Frank’s number one concern is the safety of his animals, especially the rare white jag, his big meal ticket.

The two stories – Frank’s and Loffler’s – collide, of course, as the great white hunter turns his skills to track down both the rogue killer and his precious jaguar, hoping to get rid of one and to save the other. Joining Frank in his war against Loffler is Navy lieutenant, Dr. Ellen Taylor, somehow responsible for the criminal’s safe delivery to federal authorities. Loffler’s contrary efforts to escape thwart the doctor’s mission.

With a possessive big game hunter and a rare cat, combined with a smart, psychopathic killer on the loose aboard a ship at sea, you can kind of figure out where this adventure yarn is going. As such, there are few surprises and lots of creatures jumping out from the dark, making for a mildly entertaining actioner. And, it has Nic Cage sharing the lead with a big white cat.