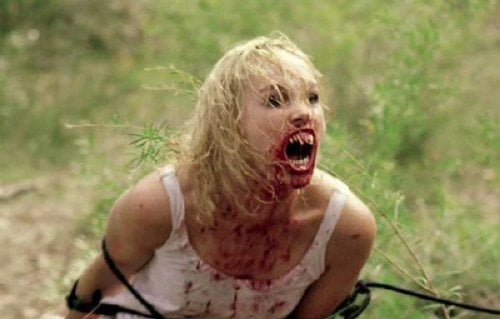 12,000 years ago, a human ancestor painted a wall as a warning of what lay beyond, but when Anja (Zoe Tuckwell-Smith) tells her friends in the present day what a great-great-great uncle discovered 120 years earlier it sounds like a camping expedition! Dace (Wil Traval), in particular, is thinking this rediscovery could mean his college thesis, grant money and even fame. But when the six friends actually find the site they cannot anticipate what will happen when one of their own goes "Primal."

Writer/director/editor Josh Reed's low budget Australian horror film doesn't really take his audience anyplace new, but he does so with effective suspense, decent gore effects and some well placed humor. Some of his effects aren't up to snuff, but they're almost endearing in that indie spirit kind of way and, most surprisingly, Reed has assembled a cast from shared Aussie television shows who make their characters distinct and interesting. Add producer Rob Gibson's varied, nerve rattling score and you've got the little horror flick that could. When the group identify the mountain seen in Anja's uncle's drawings, they discover a tunnel which will take them where they want to go quickly. But Anja herself begins to hyperventilate inside the tunnel entrance. She suffers from claustrophobia (something's said about being locked in a basement for a week, but it's not really clear) and not everyone, especially blonde flirt Mel (Krew Boylan), is sympathetic. Five take the tunnel route and Anja drives their vehicle around the mountain to meet them. Of course, it is obvious what must happen at film's climax. At camp, Mel and her inexplicably studious looking boyfriend Chad (Lindsay Farris) make no effort to cover up the sounds of their tented lust, then Mel opts for skinny dipping, something she cannot convince Chad to join her in. Alas, she emerges from the water covered in leeches which Chad must watch Dace pick off her naked body. Stage set for future Neanderthal behavior - check. That night Mel falls into a dangerous fever, but Dace doesn't want to leave until, when her teeth begin to fall out, he must admit things look dire. But the insects around this mountain, though tiny, are ravenous and have seriously damaged their tires. They're stranded and Mel's about to become a toothy beast just like the weirdly savage rabbit Dace and Kris (Rebekah Foord) encountered earlier. Kudos. While one could see shades of films like "The Ruins," "Descent" and Aussie indie "Undead" here, one hardly expected sly references to "Monty Python and the Holy Grail." "Primal" gets a lot of mileage out of group dynamics, especially after the idea of killing Mel is brought up. A trapping sequence is nicely done and any foray outside of camp is tense, even more so when one more of there own befalls Mel's fate. The film's climax is both Shakespearean and Freudian with a literal visualization of the 'beast with two backs' and a cave tunneled through. Krew Boylan and her makeup (and sound effects?) team do a lot with a little, although it is clear the actress got quite a physical workout. "Primal" may not sound like much, but in its small way it's better than most studio efforts in the genre. It's being released as part of IFC's Midnight series.