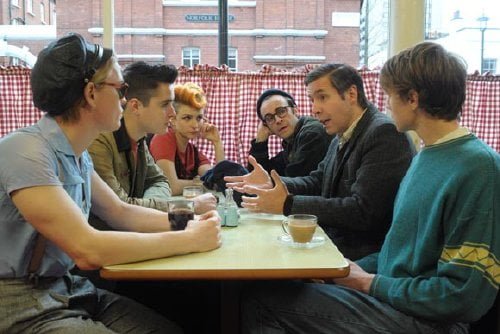 In the summer of 1984, the English economy was in the pits and strikes were the means of the day to get worker justice. The National Union of Mineworkers walked off the job and settled in for the long haul against the hostile Thatcher government. They get the most unlikely support for their strike from the Lesbians and Gays Support the Miners movement in “Pride.”

The story by Stephen Beresford is closely based on real life events of a most unexpected alliance. The gay activists, led by Mark (Ben Schnetzer), when the miners’ strike begins, collect money in their community to help the mine workers. A small band of the dedicated LGSM head to the Welch mining town of Onllwyn to give the donations to the strikers and their families. From their first meeting with the striking workers, the LGSM team runs into the expected prejudice from certain members of the mining community. Issues of the day – prejudice against gays, the start of the AIDS epidemic, the plight of the union workers in Great Britain and an economy gone bad – are given proper shrift. Matthew Warchus, in his second time as helmer (his last film was “Simpatico (1999)”) and first time scripter Stephen Beresford create a enjoyable strangers in a strange land movie that is both dramatic and funny. The issues mentioned above are given serious attention and the comic relief comes from the town’s lady folks led by Hefina (Imelda Staunton) and Gwen (Menna Trussler), both on the strike committee. Paddy Considine, as the sympathetic-to-the-LGSM strike leader, Dai, and Bill Nighy, as union official, Cliff, lend their veteran status to the mostly unknown cast. The filmmakers do an honest job in depicting the life and times in mid-1980s Britain amidst a volatile and often violent period of social change. The story flows a bit too perfunctorily – for instance, the dedicated, militant LGSM leader Mark reaches a point where he just gives up supporting the miners and leaves, only to show up later in a coda at the end of the film. Also, at one point, one of the gay contingent, Jonathan (Dominic West), does a dance at a union meeting that instantly unites the town and LGSM. It is cute, but too clichéd. After seeing “Pride” I felt compelled to learn more about the LGSM and the miners’ strike and, besides the typical embellishments the filmmakers feel necessary, the story, as told, is accurate to the actual events.