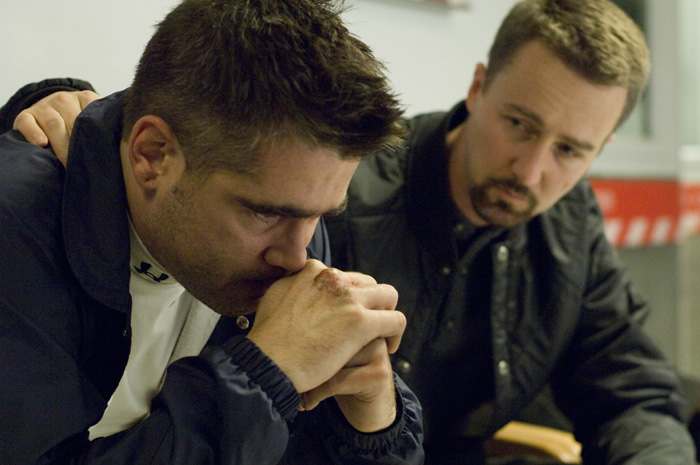 Four police officers are gunned down in a drug raid gone bad and police chief Francis Tierney Sr. (Jon Voight) badgers and begs his detective son, Ray (Edward Norton), to head the investigation of the slaughter. Ray discovers that it was not just a failed raid but also a case of police corruption that has consumed the precinct commanded by his brother, Francis Jr. (Noah Emmerich), in “Pride and Glory.”

Anyone who has seen a decent amount of movies will know what "Pride and Glory" is going to deliver within the first few minutes of the producer/director O'Connor brothers' ("Tumbleweeds," "Miracle") film. But that doesn't mean it's not worth a look. There is some fine acting and a lot of gritty realism that make this film, cowritten by director Gavin and Joe Carnahan ("Narc," "Smokin' Aces"), feel like it bubbled up from the Brooklyn/Bronx neighborhoods where it is set. Police Sergeant Francis Tierney, Jr. (Noah Emmerich, "Miracle," "Little Children") coaches his cop brother-in-law Jimmy Egan (Colin Farrell, "In Bruges") to victory on the football field as his cop brother Ray (Edward Norton, "The Incredible Hulk") and sister Megan (Lake Bell, "What Happens in Vegas") cheer from the sidelines, but their celebration is cut short when Fran gets a call about a drug bust gone bad. They all race to the scene, Fran to take charge, Ray to hold the hand of a long-time friend being rushed to the hospital and Jimmy to taken in the carnage, wring his hands and pull his hair, behavior that tells us he's got something to do with this mess. Fran's boss, dad Fran Sr. (Jon Voight, "National Treasure: Book of Secrets"), begs son Ray to join the task squad being formed to investigate. Ray, reluctant from some past experience, gives in, and immediately things don't add up. The guy they had gone in to get, Angel Tezo (Ramon Rodriguez), apparently got away from the scene before the NYPD arrived, tipped off - by whom? Family dynamics are relayed on Christmas Day. Fran Sr. is an alcoholic, but in a solid marriage. Fran Jr. adores wife Abby (luminous Streep lookalike Jennifer Ehle, 1999's "Sunshine"), but she is dying of cancer. Ray is separated from the wife he still loves. Jimmy and Tierney sister Megan seem quite happy with their brood. As Ray begins to find signs pointing towards police involvement, he takes the information to brother Fran, who acts on it but does not disclose the truth to Ray. Fran has looked the other way at some perceived misdemeanors believing the ends justified the means, but is not aware of the depth of corruption within his squad. Father Fran believes in protecting his own, the logic which got son Ray into a bad situation before. Jimmy begins to get squeezed by the orchestrator of what didn't go down as planned. The whole things comes to a head one night when one of Jimmy's guys flips and starts a barely contained race riot. Colin Farrell excels at playing compromised f'ups and is intense here. O'Connor establishes him as a family man, then flips the switch, Jimmy extracting information in a horrifically threatening way within another's family home. Farrell makes Jimmy a real dichotomy and keeps racheting up the guy's tension. Norton conveys past experience in his present intensity, determined to do his father's bidding his own way and Emmerich makes Fran Jr. the guy trying to hold everything together while being battered in multiple directions. Rick Gonzalez ("War of the Worlds," "The Promotion") is a shadowy force going up against Farrell on Jimmy's home turf. Ehle is an actress I'd love to see much, much more of on the big screen. O'Connor and his production team serve up real blue collar homes and neighborhoods and the film has a gray, gritty texture to its look. A climatic scene recalls the Abner Louima case - only worse - and O'Connor stages it in such a way that we see just enough of the gore to feel the violence. The film goes on a bit long, and its "Suddenly, Last Summer" ending is a wee bit over the top, but it's a visceral experience.

Director Gavin O’Connor delivers a middlin’ cop thriller that benefits most from its stellar, veteran cast and less from its overly convoluted story. The players are uniformly good with one exception. Colin Farrell outshines everyone as tough, smart and ruthless Jimmy, the ringleader of the corrupt cops under the command of his brother-in-law, Francis. I was not a fan of the Farrell when he first came to my attention in “Tiger land (2000)” but that changed with his over the top performance as the uber bad guy, Bullseye, in the otherwise so-so “Daredevil.” That got my attention and my opinion changed, further, with his outstanding performance in this year’s “In Bruges.” As the cop gone bad in “Pride and Glory,” Farrell is at the top of his form and positively chilling in his coldness. To me, he is the prime reason to see the film. Edward Norton gives a typically solid perf as Ray, the honest cop assigned to crack the corruption ring. Noah Emmerich is very good as Francis Jr., giving a nuanced performance as the unknowing precinct commander who, though not a part of the corruption ring, knows he is still responsible for the actions of his men. Jon Voight again proves his acting mettle as father and leader. He, too, gives nuance as Francis Sr., father, grandfather and commander of cops. Jennifer Ehle, as Francis Jr.’s cancer ridden wife, has a tough role in what is normally a two-dimensional character. The actress, though, builds her Abby into a fully formed, very sympathetic person. The rest of the cast is also up to snuff across the board. What keeps “Pride and Glory” from being a great cop corruption thriller like “Serpico” is the convoluted story by O’Connor, Joe Carnahan, Greg O’Connor and Robert Hopes. What should be a straightforward story of good over evil gets muddled as things unroll to its climax. There are moments of genuine thrills and chills, especially when Jimmy shows that he will stop at nothing, not murder, not mutilation (watch for the films best scene involving a hot iron and a baby). The first rate cast helps take the only fair story to what should have been unattainable heights. Techs, too, are top notch with vet lenser Declan Quinn lending to the dark grittiness of the film. Production design by Dan Leigh and film editors Lisa Zeno Churgin and John Gilroy also help for the film’s look and feel. “Pride and Glory” is a good film that could have been great.