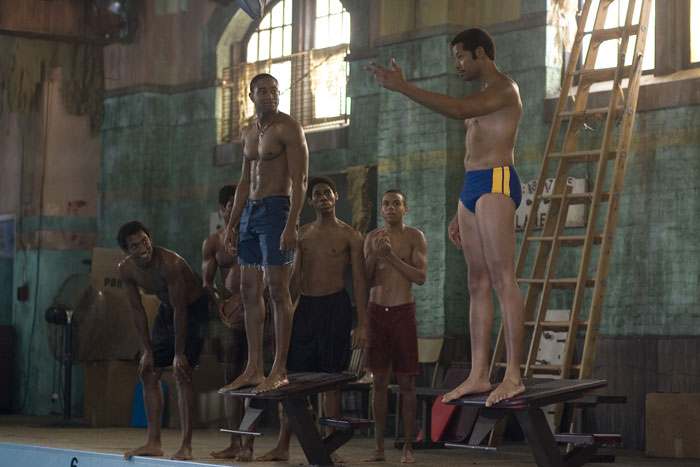 In the early 70’s the nation’s economy was on the rocks and college educated Jim Ellis, despite his credentials, can’t find a job, any job. He finally finds work with the Philadelphia Department of Recreation and is tasked to clean out a recreation center slated for demolition. A life-long swimmer, Jim discovers that the center has a working swimming pool and, seeing the potential of the local teens, decides to field his own inner city swim team and compete with the big schools in “Pride.”

As a professional swim instructor, “Pride” was a must see film for me. What’s not to like, I thought, about a movie about swimming and starring the charismatic Terrence Howard? Unfortunately, the film is a routine inspirational sports film that drags out the usual clichés about overcoming life’s obstacles and prejudices, sportsmanship and the value teamwork. We’ve seen it all many times before, and done much better in films like “We Are Marshal.” The actual swimming in the film is given short shrift with little time spent on how Ellis recruits his swimmers from a cadre if inner city kids who have been forgotten by the system that took away their main form of entertainment – their basketball hoops. The usual training sequence is handled, um, briskly as the boys and one girl are put through their paces as they build into a team. The good looking kids are not given much by way of 3D personality and are more like background in Jim Ellis’s grand plan. Terrence Howard is tied down by a character that never extends beyond development that you have seen before. Ellis is a likable character but is drawn in just two dimensions. Bernie Mac, as rec center custodian Elston, starts off with a bit of bitter edge but soon devolves into the comic-relief sidekick who is there for the laughs only. Kimberley Elise walks through her role as city counselor Sue Davis who turns from uncaring bureaucrat to supportive ally to Jim. Tom Arnold, as the head of the city’s prestigious private school swim team, is merely a jerk whose comeuppance is inevitable. Pride” is a feel good sports film but does nothing new, with the exception of introducing swimming as its theme. (Swimming has evolved remarkably since 1973 and the action – stroke and technique – is definitely new millennium, not 70’s). It has heart but not the soul it needs to be different.