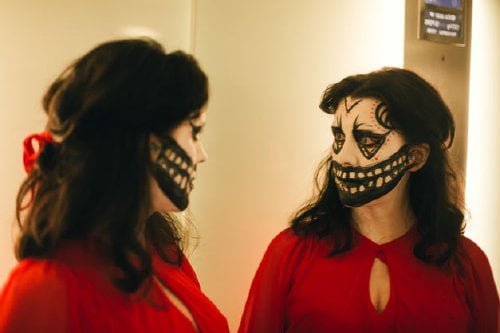 Ruth (Alice Lowe) is single and heavily pregnant with her first child. She's uncommonly in tune with her unborn baby, who communicates with her about the evils of society, ordering her to kill its worst elements in "Prevenge."

After collaborating with Ben Wheatley on "Sightseers," writer/star Alice Lowe makes her feature directorial debut with this pitch black comedy about a murderous fetus nudging its mother to the brink of insanity. Lowe, 7-8 months pregnant herself while shooting the film, keeps pulling the rug out from under us, surprising us at every turn. Take her opening scene, for example, in which Ruth visits an exotic pet shop ostensibly to purchase something reptilian for her child, even though she's afraid of these creatures. She seems oblivious to the increasingly vile double entendres voiced by its owner (Dan Renton Skinner, "High-Rise"), but Ruth's had a plan all along, while her choice of gift reflects on her feelings towards her unborn child. And if at first you might think this is a male directed rage fantasy, guess again. The midwife (Jo Hartley, "Eddie the Eagle") Ruth visits shows concern about Ruth's mental state, telling her that she 'has no control over her mind or body,' asking if she knew, for example, that exposure to high pitched noises could cause her to shoot milk from her breasts (Lowe will not fail to use this tidbit later in her film). She backtracks on a mention of social services, assuring Ruth that no one will take her baby from her, but she's put Ruth on the defensive. Ruth's next mark, a disgusting excuse for a player who calls himself DJ Dan (Tom Davis, Wheatley's upcoming "Free Fire"), takes her to the home that he shares with his elderly mother, who Ruth tenderly returns to bed after slaughtering her son, even doing the washing up before departing. (Ruth kisses each of her kills on the forehead, another pointer towards her relationship with her child-to-be.) After seeing Ruth in the guise of hesitant shopper, down-at-her-heels maternity case and disco party girl, she emerges in a business suit for a job interview where her bulging belly is the elephant in the room. Ella (Kate Dickey, "The Witch") streams corporate speak until she steps into Ruth's elaborate sisterhood trap. News bulletins on a falling climber hint at the fate of Ruth's baby's father and we fear for the climbing instructor (Kayvan Novak, "Paddington") who refuses to train her because of her condition. Lowe's film is hilarious in its skewering of leering men and unsupportive women, but her film also comments on the trials of pregnancy and the often condescending attitude toward the mental competency of expectant mothers. As a director, she can turn on a dime, shocking with gory violence one second, eliciting a laugh the next. As an actress, Lowe is sullen, witty and wanton in her portrayal, the line between her character's play acting and real intent shrinking as her pregnancy advances. As a writer, she sprinkles in seemingly insignificant pieces of information (Ella's 'adventure weekends') later revealed as anything but. With "Prevenge," Lowe folds feminist filmmaking into one of the most difficult genres to pull off, the horror comedy. ("Prevenge" will begin streaming on Shudder on 3/24/2017. Note that Shudder also recently began streaming the long unavailable, 109 minute unrated cut of Ken Russell's 1971 masterpiece, "The Devils.") Grade: