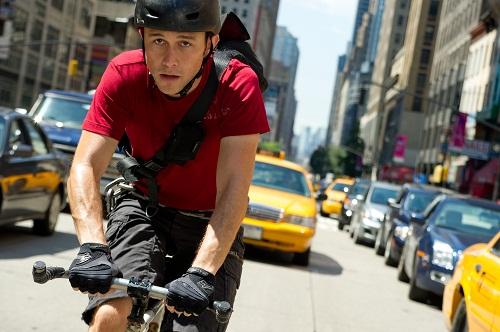 Wilee (Joseph Gordon-Levitt) is at the top of the bicycle messenger delivery business on Manhattan. He has the uncanny ability to guide his bike (one speed, steel frame, no brakes) through the peril-filled roadways of the city and is the fastest to deliver. He takes a job for his girlfriend’s roommate and has less than 90 minutes to deliver his “Premium Rush.”

It's odd that a film about bicycle messengers racing against time has ended up being one of the longest 85 minute films I've seen lately, often paced to spin wheels. The central plot mechanism is nothing but a puffed up MacGuffin and Michael Shannon plays the piece's villain, corrupt cop Bobby Monday, like a cartoon character despite the fact that it's the film's hero (Joseph Gordon-Levitt, "The Dark Knight Rises") who's named Wilee (as in Coyote). And yet, director David Koepp ("Stir of Echoes") has orchestrated many thrilling sequences of bicyclists dodging and weaving through the real life traffic of Manhattan, with Wilee making "Run Lola Runesque" triages before choosing a path. A buff Dania Ramirez ("American Reunion") creates interest as the center of a love triangle and Aasif Mandvi ("Margin Call," "The Dictator") adds a nice dollop of humor as Security Messengers' boss/dispatcher. In the end, 'It's Chinatown' as comeuppance. "Premium Rush" doesn't quite come together, but it's better than it's delay (it was filmed two years ago) would have you suspect.

From the very start, “Premium Rush” made me think of the 1986 “Quicksilver” starring Kevin Bacon but with almost non-stop chases through New York City. As such, there is not much of a story – Wilee picks up an envelop containing a ticket from Nima (Jamie Chung) to be delivered to an address in Chinatown. He is approached by a man claiming to be the college security chief (Michael Shannon) who demands that Wilee give him the envelop. He refuses and takes off on his delivery bike. The man (corrupt NYPD cop Robert Monday) chases him through the city with one harrowing near miss after another threatening Wilee’s life. I have liked Joseph Gordon-Levitt ever since TV’s “Third Rock” and he is likable as Wilee, if under drawn and two-dimensional, a problem with all of the characters in “Premium Rush.” Michael Shannon’s corrupt cop with an uber-gambling habit, hence the reason he is after Wilee. His character, Monday, is nearly comical when he should be sinister. Techs, especially for the fast-paced chase, are pretty slick and hold your eye. After a while though, it all gets repetitive. The movie begins with the image of Wilee flying through the air to an abrupt landing. This begins a series of flashbacks that are intended to build the story and characters but, instead, feels, well, rushed. Director and co-writer David Koepp (with co-scribe John Kamps) is more interested in all the bicycle-car, bicycle-bicycle chases, which are often cleverly done with Wilee always looking to find the fastest way through traffic and visualizes the cons of each possibility. But, the bare bones story has a hard time carrying “Premium Rush” through its 91 minute run time.