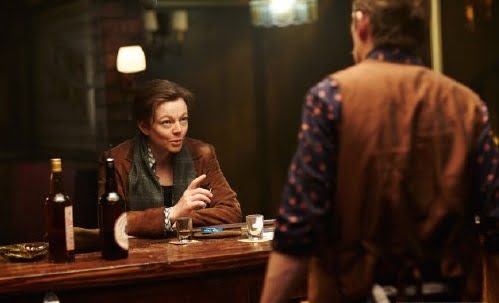 The man, known only as the Bartender (Ethan Hawke), is, in fact, a Temporal Agent whose mission is to travel in time to stop crimes before they become crimes. While tending bar one night, a customer makes a bet that he has “the best story you ever heard” in “Predestination.”

In an attempt to thwart NYC's notorious Fizzle bomber, an agent is caught in a blast. He awakens in a hospital bed where a doctor informs him he'll have a new face but withholds his report's psychiatric evaluation of psychosis and mood swings. The agent goes undercover as a barkeep (Ethan Hawke) where he'll meet a young man who bets him he can tell him the wildest story he's ever heard. But the stranger, who writes a True Confessions column called The Unmarried Mother, doesn't know he and his listener's crossed path is one of "Predestination." Australian writer/directors Michael and Peter Spierig have played with zombies and vampires in their films "Undead" and "Daybreakers" with fair to middling results. Now, adapting Robert A. Heinlein's 'All You Zombies,' they've taken a giant leap forward with a twisty time traveling tale that just about swept the 2014 Australian Film Awards. Those who were floored by "Looper" need to check this out - it's a far better film, despite a lower budget look and features a breakout performance from Sarah Snook ("Jessabelle") who's like a cross between Tatiana Maslany and Dane DeHaan in this role. With four bombings having killed 112, the streets of New York City are largely abandoned, but the Unmarried Mother columnist (Snook) won't be shaken. After an initially testy exchange with the barkeep, the bet is set and he begins 'When I was a little girl...' From this 'present' day (the film is set in the past, a kind of 'nuevo retro' sci-fier), the tale flashes backwards and forwards from 1945 to 1992. Keep tabs on the timelines, as seemingly minor events take on greater meaning when viewed from different eras. The foundling left at the door of a Cleveland orphanage in 1945 turns into a young woman of prodigious intellectual skill, particularly in mathematics and science. But she's also an outsider who uses her physical abilities to fight those who attempt to bully her. Just as Jane realizes she's as likely to get married as she was to get adopted, she's recruited by Mr. Robertson (Noah Taylor, "Shine," "Submarine"), who believes her unique abilities make her a good match for Spacecorps. Yet despite her achievements, every time Jane seems on the verge of a personal breakthrough, she's delivered a harsh setback. As the Barkeep absorbs his/her story, a background television reminds us of the Fizzle bomber. While it's not that difficult to figure out where much of this is headed, it's the way the pieces fit together that's so intriguing. It's a mystery with romance, time travel and biological experiments and the Spierigs tell it in ways that recall film noir with a dash of Kubrick by way of "The Terminator." Hawke is the unstable stabilizing force here (he's got a great parting shot) but it's Snook who really wows - we're as floored as Hawke when that story begins and later we'll see her female rendition preparing to become a man, the actress convincing us of both genders at the same time. Like Maslany in 'Orphan Black,' she's also tasked with playing opposite herself and convinces while also covering emotional bases. As the man who recognizes the 'predestination paradox,' Taylor creates a shadowy yet sympathetic, supportive character. The writing has its occasional awkward bump and production is low key (special effects are largely used to create environmental illusions), but the story is so beautifully pieced together and well acted it transcends quibbles. Original Music by multitasker Peter Spierig dips into The Doors and Tangerine Dream territory.

Time travel stories are tough to bring to the big screen. Every science fiction fan, like me, scrutinizes such tomes just to find the discrepancies and errors in the concept of travelling through time. The Spierig Brothers (Michael and Peter) adapt and direct sci-fi maestro Robert A. Heinlein’s short story, which he reportedly wrote in a single day, All You Zombies. The result is a fascinating, complicated twist on the genre that, though I watched carefully, will require a second viewing just to study the time travel conundrum. “Predestination” is a film that should not be discussed with those who have not yet seen it. The story weaves its way through time as The Bartender’s mission unfolds. I will say that the film’s stars, Ethan Hawke and Sarah Snook, do an outstanding job enveloping their enigmatic characters, especially Snook, who has to play both genders as, first, a woman and, later, as a man and does so effectively. There is a maguffin that flows through the story as repeated references to the notorious Fizzle Bomber and The Bartender’s hunt for the murderous criminal. Just when you begin to forget about the FB, the filmmakers rub it back in your face – in a good way. This clever little tool is just one of the many things the makers use to keep you thinking and guessing right to the end. “Predestination” is a pleasant surprise and solid science fiction.