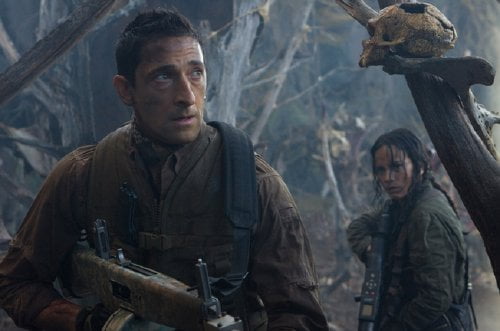 A group of A-level mercenaries and criminal killers are gathered from around the globe for a mission which they realize only too late is an experiment to see if the hunter can survive as the hunted of an alien planet's "Predators."

This long gestating Robert Rodriguez reboot comes to the big screen reworked by first-timers Alex Litvak & Michael Finch, directed by Nimród Antal ("Kontroll," "Vacancy") and starring Oscar winner Adrien Brody in his second horror outing of the year and it's not half bad. Although I've heard this edition described as a prequel, it's not - the character of Isabelle (Alice Braga, "I Am Legend," "Repo Men") specifically refers to the original 1987 story as her reason for recognizing a predator - but it certainly leaves enough avenues to be explored in a sequel of its own. The film grabs us with its opening sequence as a comatose Royce (Brody) comes to in the midst of a freefall. He lands in a jungle and is quickly joined by Cuchillo (Danny Trejo, "Grindhouse," sporting another 'knife' name) only to be opened fire upon by Nikolai (Oleg Taktarov, "Righteous Kill"). Once Nik's been convinced they're on the same side, they need to figure out who they're against. The group gathers Isabelle, Mombasa (Mahershalalhashbaz Ali, "The Curious Case of Benjamin Button"), a Serria Leone death squad member, Stans (Walton Goggins, "Miracle at Santa Anna," "That Evening Sun"), a con two days away from execution, Hanzo (Louis Ozawa Changchien, "Robot Stories," "Gigantic"), an elegantly attired Yakuza member and, found hanging upside down in a tree, Edwin (Topher Grace, TV's "That 70's Show," "Spider-Man 3"), a doctor and the only one who doesn't seem to belong to this group. Royce (who tells no one his name until film's end) takes the lead, saying he's going to higher ground. Isabelle makes an unusual discovery on the way and Royce notes that the sun hasn't moved in the sky since they all arrived. Once they make Royce's destination they're met with a vista unlike any ever seen on earth. They run across an elaborate trap set by a dead man and a pack of beasts that look like wild boars crossed with dinosaurs who stop pursuit at the sound of a strange whistle. Royce decides they are being hunted and tracks back, leading them into a killing ground where a live predator is strung up on a jagged piece of metal. Then they meet yet another of their own, Noland (Laurence Fishburne, "Mission: Impossible III," "Armored"), who's been there so long he's gone a bit mad but who can fill them in with missing history. The filmmakers have gone out of their way to do some things a little differently, especially in introducing the predator as one captured by its own kind. Sure the assembled group has the usual mixture of talents and characteristics, but I didn't figure out what was up with Topher Grace's character until he shows his hand. He's the only (weak) comedic relief, at least until Noland hums a few bars from "The Ride Of The Valkyries." With its alien planet setting and spaceships, including one the group take refuge in, it's difficult not to think of "Aliens," the Predators's monster mashup foe and it must be said that the armor they wear in this outing makes them less interesting than their true, organic beings. Brody is not the odd choice one might think as the leader of the pack here - he gives gravitas to his performance and throws out a good Hemingway quote. As weird as it is to see Danny Trejo next to Topher Grace, Grace eventually gets to strut his stuff with the best of them. Taktarov gets empathy as a family man but Ali, given his background, shouldn't and does if simply for want of having him in one's corner. Alice Braga is becoming the Rachel Ticotin of her day and she's got good screen presence whether playing a warrior or a lover. The film looks good, that set bound looking death camp locale excepted, with cinematography by Gyula Pados ("Kontroll," "The Duchess") edited by Dan Zimmerman ("AVPR: Aliens vs Predator - Requiem") so that you can actually tell what is happening. What is strange is that not a single one of this 'chosen' squad wonders who picked him and why he was sent. with Royce commenting that he's got to find a 'way off of this planet,' one can only imagine that's when we'll all find out.