Precious: Based on the Novel 'Push' by Sapphire 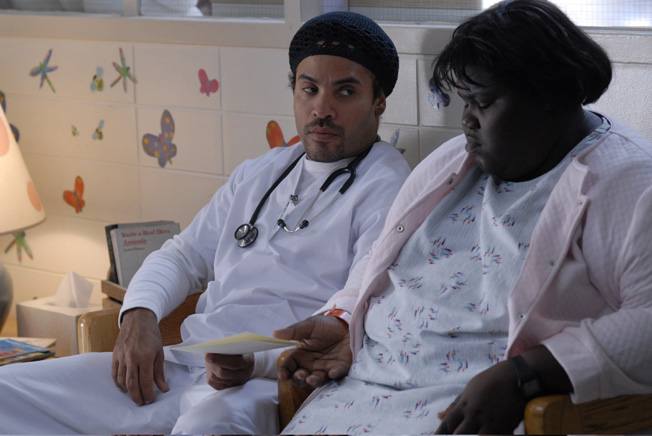 Clareece Precious Jones (Gabourey 'Gabby' Sidibe) does well in her math class but is functionally illiterate. Her Harlem principal cannot get an answer when she asks how it is that the sixteen year-old 7th grader is pregnant for the second time and expels her, but she also directs the girl to report to Each One Teach One, an alternative school. But Precious has a powerful adversary in her mother, Mary (Mo'Nique, "Phat Girlz," "Beerfest"), an abusive monster who thinks her girl's education will negate her welfare benefits in "Precious: Based on the Novel 'Push' by Sapphire."

This highly regarded film, which won both the Jury and Audience awards at this year's Sundance Festival and subsequently picked up Oprah Winfrey and Tyler Perry as producers, is well acted and Lee Daniels, producer of "Monster's Ball," has directed it with some wit and experimental flair, but the actual story, that of a morbidly obese sixteen year-old who escapes hell on earth with her two children via the kindness of a teacher is a horror movie turned fairy tale, "Cinderella" on steroids. It's message, that we should not ignore society's downtrodden, is a good one, but its depiction of a young girl who is physically and emotionally abused, incestuously raped and practically force fed yet retains a desire for an education and to be a good mother seems far fetched. Where are the emotional scars that would surely lead to behavioral issues? In this adaptation by Geoffrey Fletcher (and no, I have not read the source novel), Precious only has one moment of doubt, and that after she's been dealt an ironic blow that totally stacks the deck against her. After credits which suggest they have been written by an illiterate over a street light bearing a red scarf, Daniels projects us into Clareece's Math class where she indulges in the first of a string of escapist fantasies. In this one, she is adored by her white math teacher who is going to marry her and move her into a nice house in Westchester. When the kids in front of her obscure his words, she gets up and thumps them. Then she's called to the principal's office, but not for her physical flare-up. At home that night, Precious's mother is seated as usual in front of the TV chain smoking as she stands at the stove where pigs feet bubble and chicken fries (Daniels uses these images to springboard to flashbacks of Precious's rape by her father as her mother watches from the hallway - cutaways, such as one of a tub of Vaseline, suggest the horror more than it is shown). Mary speaks softly, which makes her violent outbursts all the more horrifying. Precious speaks to her mother with respect, then suddenly his hit in the back of the head with a flying object. When the principal dares to ring their bell, Mary erupts and goes on a tirade about her daughter's lack of worth and brains. Precious is being groomed for a life of welfare and hopelessness. Precious, though, who continues to fantasize about being adored on stage and who sees a pretty white girl in the mirror, seems to believe herself and after 'jacking a tub of fried chicken, presents herself at Each One Teach One. Like many movie teachers before her, Ms. Rain (Paula Patton, "Deja Vu," "Swing Vote") believes in the power of journals and Precious speaks in class (a class full of female 'characters') for the first time. Once she begins to talk, her story slowly becomes known and it just gets more and more hellish. When she has her second child - this time in a hospital - she is surrounded by classmates and new friends like Nurse John (rocker Lenny Kravitz, another angelic presence), but when she takes Abdul home to mother she finally realizes that Mary cannot provide home. "Precious" has many things to recommend it, like Sidibe's star making turn and comedienne Mo'Nique's fearlessness in transforming herself into something other than human. Both music stars - rocker Kravitz and particularly Mariah Carey ("Glitter") as a social worker - meld right into the urban depression that is Precious's world and Paula Patton radiates warmth with a little bit of steel as Blu Rain (whom Precious is initially shocked to discover is a lesbian, having been taught that homosexuals are evil or something). Also notable are Xosha Roquemore and Angelic Zambrana as Precious' equally confident classmates, one Jamaican the other the class clown who thinks she's in the music industry. Daniels attains realism in the grit of Precious' neighborhood, particularly in Mary's apartment which is a dimly lit chasm with a steep set of stairs leading to upstairs bedrooms, both a refuge and another form of hell. The shaping of the story adds impact - just when one begins to wonder just where Precious's first child is, Daniels presents the horrifying sham that is Mary's visit from a social worker and we get our answer. He also is adept at inserting humor and it's surprising just how much of it there is. The film has a very grainy, murky visual quality which suggests a very low budget. Yet, for all the horror on display and all the resulting uplift, "Precious: Based on the Novel 'Push' by Sapphire" (a horrible title if ever there was one) doesn't connect on an emotional level. Sure, one flinches at the abuse rained down upon the heroine, but her fairy tale 'redemption' (and her own self image which, come to think about it is at odds with what she says) is in contradiction with the events which precede it.