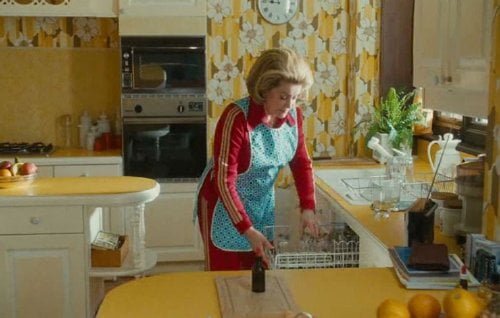 Suzanne Pujol (Catherine Deneuve) seems content with her life as a housewife. Her husband, Robert (Fabrice Luchini, "Intimate Strangers," "Molière"), has taken over her father's umbrella factory which he rules with an iron fist. When their workers go on strike, Suzanne is coaxed into action by the town's communist mayor, Maurice Babin (Gérard Depardieu), a secret ex-lover of hers, and her kinder management style works wonders, even winning her the allegiance of Robert's not-so-secret mistress, his secretary Nadège (Karin Viard, "Time Out"). But Robert plots to regain his position, hoping to shove Suzanne back into her pigeonhole as a trophy wife, a "Potiche."

Director François Ozon ("Swimming Pool," "Time to Leave") returns to the mirthful side he showed with "8 Women," this time going retro with the "Cactus Flower" team of Pierre Barillet and Jean-Pierre Grédy's adaptation of their own 1983 play which takes place in the '70's. This lark features French icons at the top of their game and begins as outrageous farce before wrapping with a woman's liberation message delivered in triumphant song. The film begins with a tracking shot of Deneuve's derriere as she jogs through the woods in a red running suit. At home she communes with nature (a deer! humping bunnies!) in a way that suggests Disney on acid. Inside her gracious manse, her cheerfulness is unabated in the face of her husband's gruffness. He's displeased she has to make his breakfast (the servants are off for a month in Portugal) and perturbed when their daughter Joëlle (Judith Godrèche, "Ridicule") drops in to wish mom the happy birthday he's forgotten. Joëlle breaks it to her mother that she's nothing but a trophy wife, but Suzanne seems unruffled as she plumps pillows. Joëlle also tells mom she's divorcing her husband because his work always has him on the road and that she hopes to get a job at the family factory. That evening, son Laurent (Jérémie Rénier, "The Child," "Summer Hours") arrives for family dinner. He's a bit flighty and cannot find a course in life although he does admit to being in love with the daughter of the town baker. Robert is apoplectic and Suzanne believes his snobbery is the cause but is astonished to learn that her husband believes the girl to be his own daughter! Suzanne's birthday dinner is delayed when Robert has not returned from the office, but when the doorbell rings, it is a distraught Nadège relaying news that striking workers have taken the boss hostage. Up to this point, everything is delightful silliness, from the loving art direction (hey, I bought that Villeroy & Boch basket china for my mom back in the day!) to the costumes to Deneuve's being paired once again with umbrellas. But the strike is a game changer, introducing a rash of secrets, shifting allegiances and launching Suzanne as a power to be reckoned with. Ozon doesn't weigh down his tone, but despite the intrigue of a rekindled romance and Laurent's colorful influence on the factory's design department (a Kandinsky line!), characters' choices have heavier import. Deneuve makes her bedroom to boardroom transformation seem effortless, truly playing with a light touch. Depardieu, with his Dutch boy cut and hulking frame, connects sincerely with his old costar and proves a 180 degree contrast to Luchini's bullying fussbudget. Viard, whose character makes quite a transition of her own, is a comic highlight. Rénier is stereotypically broad playing a character who hasn't recognized in himself what is very apparent on the surface. Bruno Lochet ("The Secret of the Grain") is solid as the loyal working man who becomes the voice of the uprising. Watch for a cameo by "pan's Labryinth's" Sergi Lopez as a helpful (ahem) truck driver. "Potiche" is a giddy throwback to the candy colored films of yesteryear with a strong empowerment message at its core. It won't stand among Ozon's best, but its among his most fun.

Suzanne Puzol (Catherine Deneuve) is the beautiful trophy wife of Robert (Fabrice Luchini), the martinet owner/manager of a local factory. Robert rules the business with an iron fist and the workers have had enough. They go on strike and Pujol hurries to the factory to put a stop to what he considers nonsense but, instead, is taken hostage. Suzanne must leave her pampered life and take over the business and free Robert in “Potiche.” I was a little concerned for the first 30 minutes or so of “Potiche” as the caricature characters are introduced one by one. Suzanne seems satisfied with her stay-at-home wife role despite the fact that her husband is a tyrant at home and work and cares not for his employees’ welfare. Daughter Joelle (Judith Godreche) is a selfish young mother of two who is unhappy in her marriage (she hates being a stay-at-home spouse) and mirrors her father’s ultra conservative views. Son Laurent (Jeremie Renier) is flamboyant and the opposite of his sister with his ultra-liberal viewpoint. Once the stage is set and the worker strike begins is when “Potiche” switches gears. Suzanne is approached by an intermediary for the strikers. Mayor Maurice Babin MP (Gerard Depardieu) once had a fling with Suzanne in their younger days and he uses this past intimacy to ask her to take over the factory and negotiate with the workers. Reluctant, at first, she agrees, decking herself out in her most expensive outfit – against Maurice’s blue collar sensibilities. The meeting starts off on a hostile note but the strikers soon realize they have a kindred spirit with Suzanne. They agree to release Robert on her promise for reform and he is sent on a long cruise to recuperate from his hostage ordeal. Suzanne immediately begins labor reforms in the factory and brings Laurent and Joelle in to help her manage the business. Laurent has a knack for design and comes up with a line of umbrellas that are a hit on the market. Business is booming when Robert returns and, all recovered, decides to take back the reigns of Pujol, Inc. A custody battle ensues and it becomes family members against family members. Deneuve and Depardieu have a long track record together as actors and the spark between the two on screen helps make this more than a drawing room farce. Sure there is farce with the two-dimensionally drawn characters (everyone else except for the two stars), especially Joelle and Laurent. They represent the black and white ends of the socio-political spectrum. They wear their hearts on their respective sleeve and change little throughout the film. Fabrice Luchini gets mileage out of his Robert, a shallow character that the actor makes into the “bad guy” with his misguided notion of labor and business. Karin Viard, as Robert’s secretary and secret lover, is the only of the supporting cast who gets to put an arc on her character. Ozon and his crew do a solid job creating 1977 France with costumes, cars and kitschy styles, using lots of pastels in the production’s color scheme. “”Potiche” is fun in a silly way but the social statement about those volatile days puts a more dynamic spin on the film. This look back in time and the charismatic paring of Deneuve and Depardieu are the draw for the film. The farce allows us new millennium sophisticates to laugh at how we, as a people, once were.