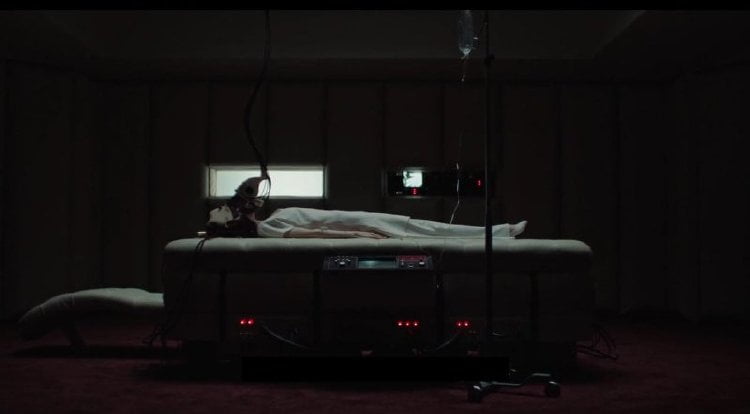 A woman inserts a needle into the top of her head, between cornrows, then looks at herself in the mirror quizzically.  Holly (Gabrielle Graham) then enters a sophisticated gathering and suddenly stabs a man in the neck.  As guests flee in panic, Holly punctures her victim so many times he dies in a literal bloodbath.  But she hesitates pulling the trigger of the pistol she’s aimed into her own mouth and after we hear a voice say ‘pull her back,’ we realize Holly was Holly in body only in “Possessor Uncut.”

After skewering celebrity culture in his needle-driven bio-horror debut “Antiviral,” writer/director Brandon Cronenberg continues to delve into body tourism, this time through the eyes of professional assassin Tasya Vos (Andrea Riseborough), a woman who has perhaps put her own personality on ice one time too many.  The film is a thriller on the surface, Tasya’s one last mission a complex takeover bid with family dynamics in play, but a psychological character study at heart as we see how her work not only impacts her own family life but causes her personality to splinter and break down.

Tasya returns to her own body, one which her partner Girder (Jennifer Jason Leigh) keeps watch over, lying beside her on what looks like a psychiatrist’s couch, via the transfer of a plug of what appears to be brain matter (the needle to the head, we later learn, is for a diagnostic check).  She’s kept on a lab table, an elaborate medical device which resembles a machine made face hugger covering her head.  Once that’s lifted, Girder conducts a debriefing of sorts, one in which Tasya is asked to identify objects from her own background (grandfather’s pipe, a mounted butterfly that still causes guilt) in order to verify she is whole and not carrying remnants of the person she just occupied, who is always left dead.  The only cause for concern pops when Tasya expresses a need to take some time off to spend with her husband and son and Girder must remind Tasya that she’s separated.  Girder is also excited about a new contract, their biggest yet, which she needs her star performer to carry out.

On her own, Tasya practices a casual response to a dinner invitation yet to be extended by the husband, Michael (Rossif Sutherland, Donald's son), she no longer lives with.  There appears to be renewed affection – and desire – when she joins them, but her time with son Ira (Gage Graham-Arbuthnot) is interrupted by flashbacks from her time as Holly.  She fails to tell Girder, who plans on a client double cross which will net them an entire company.

But when Tasya takes on the identify of Colin Tate (Christopher Abbott), things are immediately awry.  We see him eat an apple exactly the way Tasya had.  His fiancée, Ava Parse (Tuppence Middleton), finds his behavior strange and he’s chastised at work, where he monitors surveillance videos, responsible for logging details of curtains and window blinds, for being too slow.  The business is owned by his contemptuous father-in-law to-be, John Parse (Sean Bean), Tasya’s target.

Of course this won’t go well as we witness Tasya’s fading control.  If she was a bit taken aback by her appearance as a Black woman, becoming a man is far stranger, especially given expected sexual relations.  She begins to hallucinate.  Ava repeats Michael’s behavior.  And leaving this body proves far more difficult than the last one.  Gerber is forced to intervene.

I immediately noted the same translucent quality Riseborough shares with “Antiviral” star Caleb Landry Jones (the two should be cast as brother and sister).  Her pale skin and blonde white lashes serve her character, one whose identity is fading away, but if “Possessor” has a drawback, it is that its in media res beginning never really allows us to get to know Tasya before she begins to disappear.  Christopher Abbot, who’s chosen a very indie career after departing ‘Girls’ (check out the equally stylish, sexy and bloody “Piercing, in which he stars with Mia Wasikowski), is more commanding as Tasya-as-Colin, feminine empathy radiating from his wary confusion.  Cronenberg Sr. vet Jennifer Jason Leigh plays confident if inscrutable, leading us to question her true intentions.

As in his first film, Brandon’s sophomore effort shares the influence of not only dad David in subject matter and twisted medical implements, but Stanley Kubrick in Cronenberg’s oftimes sterile aesthetic.  One might also see flickers of “Mission Impossible’s” impossibly perfect masks, “Face/Off’s” borrowed face investigator and “Total Recall’s” brain implanted tourism in Cronenberg’s narrative, yet there are shades of Bergman’s “Persona” too.  Jim Williams’ (“Raw,” “A Field in England”) score ranges from slow jazz to pulse pounding electronic.  (There are a few scenes of excessive gore and violence and one brief, explicit sex scene which explain the Uncut qualifier, but trimming these scenes would only slightly skew the film’s tone, not affect its narrative.)

“Possessor Uncut” is a stylish examination of identity disguised as a science fiction thriller.