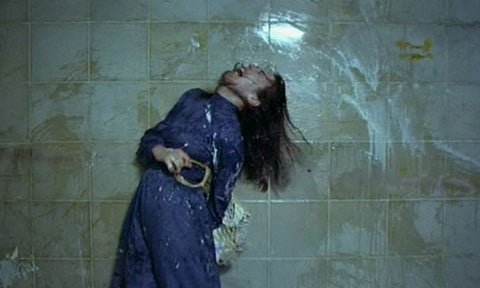 When Mark (Sam Neill,"Jurassic Park") returns home to Berlin from a job, his wife, Anna (Isabelle Adjani, "Nosferatu, the Vampyre"), has decided she wants a separation. Eventually she admits to a lover, Heinrich (Heinz Bennent, "The Tin Drum"), but when she moves into her own apartment it appears something else, something sinister, has her in its "Possession."

Writer/director Andrzej Zulawski's 1981 film was originally released in the United States shorn of 1/3 of its running time. It's hard to imagine how incomprehensible that 80 minute cut must have been because now that we have the 120+ version there are many possible interpretations. The film could be seen as a metaphor for women's liberation, the battle between the sexes, idealization of one's lover, faith vs. fate and/or a political statement, but even for those who couldn't care less about underlying meaning, "Possession" is very effective as straight up, very stylish horror. The film shares DNA with Polanski's "Repulsion," where Catherine Deneuve descended into murderous madness.

Pay attention at the beginning of the film where Mark is questioned by a panel of four about a report he sent in. 'Does he still wear pink socks?' asks one. And indeed, a pink sock wearing homosexual member of the Berlin police (Maximilian Ruethlein) does appear, the only character with enough common sense to tell Anna he's afraid of her (because he has no sexual interest in her). More importantly, however, is to reflect on the purpose of Mark's report - maybe he's become something of a monster.

Which is exactly what we seem to see more and more in Anna's reaction to her husband. And his reactions to her behavior bear it out. Soon electric kitchen knives are not only adding to the jarring sound design, both characters cutting themselves to relieve the emotional turmoil. All this and a young child, Bob (Michael Hogben), having to rely more and more on his father for care. Good thing there's a teacher willing to help offset the load. And Helen looks exactly like Anna in a wig and contacts.

So, as Mark perhaps imagines an idealized version of his wife, she's living with an evolving, slimy tentacled creature (by E.T. creator Carlo Rambaldi) who makes quick work of the private detective Mark sends to spy on her (Carl Duering, "A Clockwork Orange"). She keeps it exhausted with her continuous sexual needs and her behavior becomes more and more insane, culminating in a physically violent breakdown of sorts in a subway passage where she miscarries something oozy (the scene evokes "Irreversible's" rape setting). The eventual final product is the film's best twist.

Adjani, who made her name evoking madness over a man in "The Story of Adele H," gives a powerful, scary performance here and the (very young) Sam Neill is also quite good, his wife's behavior urging him into more extreme emotions. Heinz Bennent adds a hint of bisexuality to his performance, almost embracing Mark just as he embraces more liberal concepts of relationship. He's also a German, something neither Anna nor Mark is although they live in the divided city of Berlin, the movie's other central character. Zuwalski uses an almost deserted, desolate blue/grey Berlin as a backdrop for Anna and Mark, at one point their argument spilling out to the intersection of two city streets crossed by a truck which swerves, dumping two crushed cars onto the tarmac. Zuwalski also burden's Anna's mental health with an internal religious war, most tellingly told in a flash back home movie where she essentially tortures a ballet student before addressing the camera about the struggle between faith and chance. Earlier, when the PI rings her doorbell, church bells begin to peel. Later, she stand beneath a statue of Christ whimpering and whining like an animal.

"Possession" is a wild, crazy film under the fully controlled direction of Zuwalski. 'Goodness is only a reflection upon evil.' Indeed.