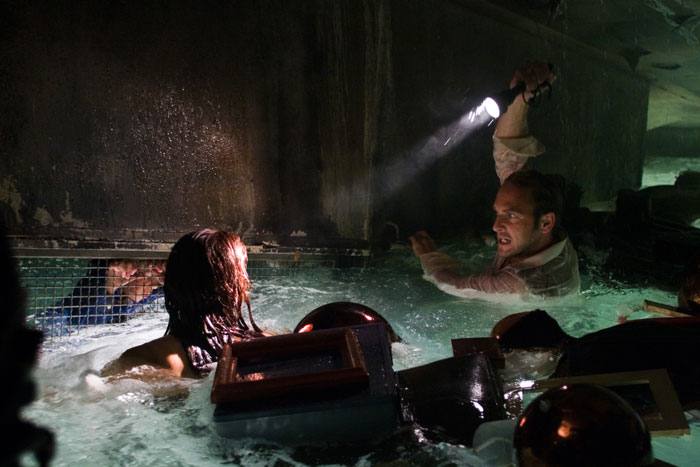 It's New Year's Eve and hundreds of revelers are partying down. Resentful Jennifer Ramsey (Emmy Rossum, "The Day After Tomorrow," "The Phantom of the Opera") slips off to the disco with her secret fiance Christian (Mike Vogel, "The Sisterhood of the Traveling Pants," "Rumor Has It...") blowing her unsuspecting dad's high stakes poker hand on her way out. Professional card shark Dylan Johns (Josh Lucas, "Stealth," "Glory Road") hits on the single mother (Jacinda Barrett, "Ladder 49," as Maggie James) of precocious young Conor James (kid in jeopardy specialist Jimmy Bennett, "The Amityville Horror," "Firewall"). Richard Nelson (Richard Dreyfuss, "Jaws," "Mr. Holland's Opus") buys an expensive bottle of wine for his table, announces that his gay lover has just dumped him, and leaves, but when he climbs over a deck rail preparing to jump he is astonished to be greeted by a one hundred foot wave on the horizon - one that is heading right for the luxury liner "Poseidon."

Director Wolfgang Petersen's ("Troy") first descent into the briny was for his tour de force submarine epic "Das Boot." His next oceanic outing was the far less successful "Perfect Storm," another true story on a smaller scale. His third time to the well is for the remake of the cheesy but beloved 1972 film based upon the novel by Paul Gallico (adapted here by Mark Protosevich, "The Cell"), but the well is all but dry this time. "Poseidon" is a special effects action adventure that is so obviously going through its disastrous motions that tedium sets in when you're not recalling the superior ballroom ballistics of Brian De Palma's "Carrie." Almost ten years later, the Poseidon looks no more realistic in the water than Cameron's "Titanic" did and there are only so many scenes of bodies being hurled about like socks in a spin cycle or survivors crossing yet another narrow passage suspended over fiery great heights before the film bilges boredom. Petersen only has 100 minutes from revelry to rescue, so those who will survive are trotted out in quick succession, some so quickly they don't even have time to become stock characters. Dylan Johns is a former marine (handy) who makes his living hustling cruise ship bettors for no discernible reason. His opponent Robert Ramsey (Kurt Russell, "Miracle," "Sky High") is a former firefighter and former mayor of New York, a bundle of 9/11 all rolled into one whose only worry now is to maintain his marrying age daughter's virginity. Nelson (we know he's gay because of the prominent diamond stud earring he flaunts) is the guy who veers from suicidal to save-his-skin-al so quickly it's almost comical. Jennifer, of course, is torn between dad and fiance, who, it should be noted, was a champion swimmer in high school. Maggie James exists mostly to provide the kid in danger who can also bond with Dylan and create a family unit where was there was only a dissolute loner. Elena Gonzalez (Mía Maestro, "The Motorcycle Diaries," "The Holy Girl") is the fearful stowaway who isn't too successful giving Nelson a reason to live and Protosevich is pulling our chain naming Kevin Dillon's (HBO's "Entourage") character Lucky Larry. Ship's waiter Marco Valentin (Freddy Rodríguez, "Dreamer: Inspired by a True Story") is a shining example of the 'nice guys finish last' adage. For all "Poseidon's" waterlogged hysterics, Petersen does manage to build suspense in a couple of very good sequences. Most spectacular is a claustrophobic climb through a vent where the key to release comes in the form of a silver cross and the filmmakers are wise to include a nod to the legendary Shelley Winters with one survivor's ultimate sacrifice. Yet when all is said and done, a lot of "Poseidon" plays like watching the extras of "Titanic" caught below decks. The film's climax, which involves a giant propeller shaft sucking air with the ferocity of an inverted wind tunnel, is undercut by the cheesy CGI shot that caps it combined with a ridiculously convenient life raft. "The Poseidon Adventure" was far from a great film, but it had a kitschy heart. "Poseidon" may have its Oscar winner, but its hull is empty.