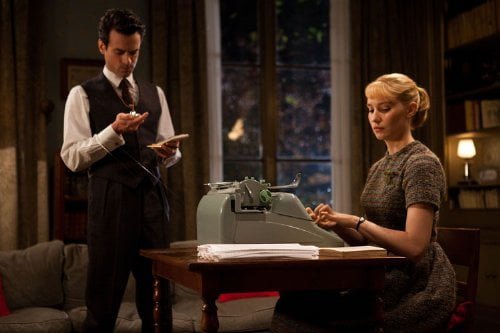 Rose Pamphyle (Déborah François, "The Page Turner") may be a klutz, but she's a two-fingered typing whiz. Not content to work in her dad's (Frédéric Pierrot, "I've Loved You So Long," "Polisse") village grocery store, she applies for a job as a secretary in Lisieux's Échard & Fils insurance. Louis Échard (Romain Duris, "The Beat That My Heart Skipped") hires her on trial then offers her the job on one condition - that she enter a speed typing competition with him as her trainer in "Populaire."

Cowriter (with Daniel Presley & Romain Compingt)/director Régis Roinsard makes his feature debut with this utterly adorable romantic comedy which feels like something right out of the 1950's without any annoying tongue-in-cheek irony. Costume, social mores, music, visual design and a good feel for the shadows cast by WWII are all sharply etched by the filmmakers. Duris and the underseen François have potent chemistry while Bérénice Bejo ("The Artist") adds a note of wise regret as the one who got away, now wife of Louis' best friend, American Bob Taylor (Shaun Benson, "K-19: The Widowmaker"). Louis still holds a torch for Marie, so he doesn't see what's right under his nose even if everyone else does. He only sees the girl who uses his hand as a notepad to take a message, who laughs inappropriately in front of a client, who shreds the wrong documents and who is a potential champion typist. Having won sporting trophies in his younger days, Louis thinks he's helping her out when he suggests she secretly move into his ancestral home and begins a rigorous training program, but within his walls, Rose sees Louis' underlying sweetness even as he wields rigorous discipline. Chinks appear in Louis' armor, first when he helps Rose up from a bicycle spill in the rain, later when she achieves her first taste of fame and Maurice, the mechanic her father wishes she'd marry, arrives in Lisieux with a bouquet of red roses (the same flowers Louis was about to present). Yet he persists in keeping hands off, banishing Rose from his home for the Christmas holidays when his relatives will arrive. Outfoxed by Marie, who drives the poor girl back to his house, announcing her as Louis' fiancee, he's startled when she stands up for him to his dad, (Eddy Mitchell, "Coup de torchon"), and it seems that romance will finally blossom. But in true romantic comedy fashion, another obstacle must be thrown into the works, just as Rose achieves his dream goal of becoming national champion. One of the great things about "Populaire" is the depth of its characters. Bob isn't just the guy who got Louis' first love, but a friendly competitor who bets against Rose while Louis cheers her on. Marie is complexly drawn by Bejo, acknowledging her feelings for one man yet fully invested in her marriage and family. Both of the main characters have complex relationships with their dads and, while Rose's mom has passed away she finds warm acceptance with Louis' (Miou Miou, "Entre Nous," "The Concert"). In Rose's village, her oldest friend, Françoise (Jeanne Cohendy) represents both support and the life she would have led had she stayed. Then there are the typing competitors like the smug Annie Leprince-Ringuet (Mélanie Bernier, "Delicacy"), engaged to heir of the Japy typewriter company and Susan Hunter (Sara Haskell), the American global champ who's all business and has a way with a rattling comment. The competitions themselves are surprisingly suspenseful affairs. Rose's time between becoming France's national champ and traveling to the U.S. for the global competition is a whirlwind of store appearances (where she 'signs' autographs on the pink Populaire model), commercial shoots and nightclubs (Roinsard unearthed the delightful “The Secretary’s Cha-Cha" for a live performance). Meanwhile Louis takes up with the Vamp (Caroline Tillette), a real 50's bombshell, until he comes to his senses. "Populaire" has been described as light fluff, but it's smarter than that. American romantic comedy of late has been mostly dismal stuff, but the French, with films like "Heartbreaker," "Fly Me to the Moon" and now this, are doing the genre proud.