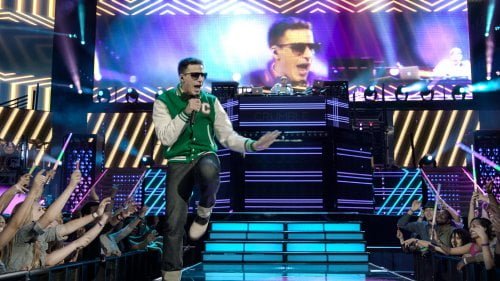 After leaving his hip-hop group Style Boyz to go solo, rapper Conner4Real (Andy Samberg, "That's My Boy") scored a huge hit with 'Thriller Also' and his ego raged out of control. But his second album, 'CONNQuest' flops and the documentary being made on him isn't presenting a pretty picture either. Conner's former Style Boyz band members Owen aka Kid Contact (Jorma Taccone) remains loyal, demoted to DJ, while Lawrence aka Kid Brain (Akiva Schaffer) retreats to a farm and churns out wood carvings in "Popstar: Never Stop Never Stopping."

Cowriters (with Samberg)/directors Akiva Schaffer and Jorma Taccone (aka The Lonely Island of SNL's digital shorts) have been buddies since they were kids, as evidenced by the opening shot in the film of their three younger selves. Now the most famous of them, Samberg, plays the most famous of them in their take on friendship and creative collaboration by way of a hip hop "Spinal Tap." The film is stuffed with sendups, loaded to the gills with musical artist and SNL heavy cameos and studded with hilariously awful songs, but plays it safe, keeping Conner4Real more clueless than hateful. In true music doc fashion, we get an overview of the rise to fame of Style Boyz, beats provided by Owen, lyrics by Lawrence. As Conner describes the latter's work as 'poetic,' we're treated to a barrage of rap profanity. But things immediately begin to look bad for Conner's latest after Aquaspin, his tour sponsor, puts his music into its appliances causing a national blackout. Conner, whose act includes 'magic trick' costume changes and holograms of himself and Adam Levin, panics as ticket sales slump. Manager Harry (affable SNL vet Tim Meadows) convinces him to add an opening act, the aptly named Hunter the Hungry (Chris Redd), a harder-cored rapper with designs on top billing. The loyal Owen is further and further marginalized, Conner putting him in Daftpunk-inspired helmet. Conner's publicity grab of proposing to his vapid movie star girlfriend Ashley Wednesday (Imogen Poots, "Green Room") in an elaborate media event goes south when Seal is eaten by wolves. Eventually, Conner leaves his garish manse, his hangers-on Sponge and Eddie (James Buckley and Edgar Blackmon), and his staff of thirty two to hole up back home in Sacramento. Only Owen, intent on 'Parent Trapping' him, and publicist Paula (Sarah Silverman) attempt to get him back on his feet. The music, written by the three filmmakers, includes 'I'm So Humble,' Conner's paean to 'Equal Rights' in which he insists he isn't gay throughout, the lithping 'Ibitha' and best of all, 'Bin Laden,' which compares wild sex to what the Navy Seals did to the Taliban leader. The film's final number, 'Incredible Thoughts,' is a ridiculous awards show singalong that spoofs Katy Perry's halftime show (that's Conner's personal chef, Tyrus Quash (Justin Timberlake), in a fish costume!). "Popstar: Never Stop Never Stopping" would have benefited from a bit more bite, but it's silly and inspired enough to bring on fits of the giggles. Where else will a Viking funeral turn into a pool party? Grade: