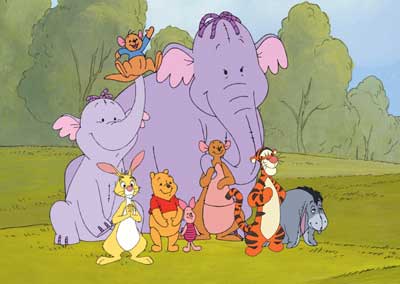 Trumpeting blares awaken the denizens of 100 Acre Woods and they gather at Rabbit's for guidance. Once the crotchety old hare identifies the creature as a Heffalump, they decide they must go on an expedition to capture it, but little Roo is told he is too young for the dangerous adventure. Roo sets out on his own and learns that Heffalumps are nothing like his what his friends have described in "Pooh's Heffalump Movie."

Disney's third Pooh feature animation is a charming lesson on tolerance that should delight children and adults alike. Beginning with a Pooh version of the classic 'three blind men and the elephant' fable, screenwriters Brian Hohlfeld ("Piglet's Big Movie") and Evan Spiliotopoulos ("The Lion King 1 1/2") take great care in the details. The Heffalump is described in song as a terrible creature, 'its nose is its tale and the other way around.' Rabbit (Ken Sansom) leads his expedition into Heffalump Hollow, where he and Tigger (Jim Cummings who also voices Pooh) quickly become separated from Pooh and Piglet (John Fiedler). Eeyore (Peter Cullen) lags behind, laden down with his every household item. But it's Roo (Nikita Hopkins) who finds a Heffalump via the trail of cookie crumbs and apple cores the beast has left behind. Lumpy is a youngster like himself and the two quickly become fast friends, singing and playing all day, even venturing to 100 Acre Woods after Roo convinces Lumpy that his friends are not scary, Heffalumps being as afraid of them as they are of Heffalumps, but no one is home. Later, when Lumpy hears his mother's distant call, he cannot find her and becomes distraught. Roo brings Lumpy back to 100 Acre Woods in the belief that his own mother, Kanga (Kath Soucie), will know what to do, but is horrified when Rabbit, Tigger, Pooh and Piglet attempt to trap and succeed in terrifying his new friend. As in "Piglet's Big Movie," the animation is relatively flat, with characters moving among immobile fore and backgrounds. The new territory of Heffalump Hollow does change the color scheme with its denser woods creating darker spaces. Fantasy sequences, such as the visuals which accompany "The Horribly Hazardous Heffalumps!" song, are rendered in bright, neon colors reminiscent of the pink elephant sequence from "Fantasia." The actual Heffalumps are given plush touches of yarn like 'hair' and a puffy tail section with visible stitch lines, as if they, too, come from Christopher Robin's toy chest. All the vocal talents of "Piglet's Big Movie" return for this new, and better feature. The Heffalumps are voiced by Oscar nominee Brenda Blethyn ("Secrets & Lies") as Mama and by delightful newcomer Kyle Stanger who gives Lumpy an infectious, British-inflected gurgle. Both Christopher Robin and Owl fail to make an appearance in this episode. In her third Pooh collaboration and second theatrical outing, singer/songwriter Carly Simon again proves an invaluable member of the franchise. Her "Little Mr. Roo" lullaby is another gift to Kanga's motherhood, just as "Piglet" had "A Mother's Intuition," and I found myself humming "Shoulder to Shoulder" on my way out of the theater.