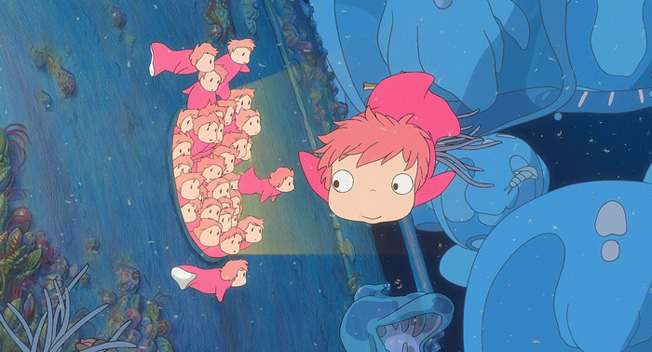 Five year-old Sosuke (voice of Frankie Jonas, younger brother of the Jonas Brothers), the son of a ship captain, runs down the cliff from his house one day to play with his toy boat when he spies a goldfish stuck inside a glass jar. Sosuke breaks the glass and gives the fish a home in a green bucket. Underneath the ocean waves, the fish's father, the wizard Fujimoto (voice of Liam Neeson, "The Chronicles of Narnia: The Lion, the Witch and the Wardrobe"), works spells to get back the daughter Sosuke has named "Ponyo."

Writer/director Hayao Miyazaki ("My Neighbor Totoro," "Howl's Moving Castle") takes a page from Hans Christian Andersen for his latest anime and while he stays true to most details of the story, it is unmistakably a Miyazaki film. "Ponyo," unlike the more recent "Spirited Away" and "Howl's Moving Castle," is more directly geared towards children, yet it maintains the strong ecological message of such Miyazaki films as "Princess Mononoke." The simple 2-D hand-drawn animation is lovely and, as always with Miyazaki, makes a strong case for a continued place for a form that Hollywood has little room for. Although Sosuke has two parents, he spends more time with his mother Lisa (voice of "30 Rock's" Tina Fey), a harried independent woman who works at the senior center, drives like a madwoman and resents the long periods of time her husband spends at sea. Koichi (voice of Matt Damon, "The Bourne Ultimatum") signals when his ship passes, but Lisa will only flash 'BUG OFF' in return. Young Sosuke wishes his dad luck. It is a fishing trawler that gets Ponyo (voice of Noah Cyrus, younger sister of Miley) into her predicament (and Miyazaki and his animators do a fine job showing the environmental wreckage and churning fishy nightmares these things create), but once she is in Sosuke's bucket, his complete and rapt attention and care win her over. Ponyo is fascinated by the humans her father hates, but Fujimoto conjures up the sea to snatch Ponyo, nee Brunhilda, back to his coral tower and her hundreds of younger sisters. But Ponyo gets into her father's powerful magic elixirs and raises havoc - as well as a powerful storm - and having sprouted arms and legs, she races across the waves towards Sosuke as his mother speeds to beat the flooding and make it to their home on the cliff by the sea. Lisa accepts Ponyo on faith but, after making Sosuke and Ponyo a dinner of ramen noodles, she is compelled to leave to attend to the seniors on the other side of the bay. When Sosuke and Ponyo awaken the next day, they find the house surrounded by water and set off in Sosuke's toy boat to find his mother (Ponyo's magic makes the boat bigger, just as she helped kick start the generator for an unsuspecting Lisa the night before). Meanwhile, Ponyo's mother, a powerful sea goddess (voice of Cate Blanchett, "Indiana Jones and the Kingdom of the Crystal Skull"), convinces a reluctant Fujimoto (who looks like a Carnaby Street era rock star with his flowing red locks, stovepipe pants and Edwardian jacket) to allow Ponyo to leave them and become human if Sosuke does indeed love her for herself. The look of this film is (mostly) magical itself, beginning with the odd little 'goldfish' that looks like a round-faced little girl with a body that is as much fish as it is pink dress (Toki, a senior center denizen voiced by Lily Tomlin, is horrified when Sosuke shows her Ponyo, declaring that a fish with a real face will bring a tsunami - which she does). The sea is a wondrous place before the animators let their imaginations run wild, and the creatures we see here are mostly true to form, just used in new ways. Ponyo, for example, uses a jellyfish to bring her to the surface to gaze at Sosuke's coastal town. Lisa racing through the storm in her little pink car with 'waves' that are really giant fish chasing her is breathtaking. Oddly enough, though, it's that ramen scene that really charms, especially when Ponyo sees what Lisa has embellished their packets with (Ham!) and the way she flicks the last noodles off her chopsticks as she slides into a deep sleep. The color palette is beautiful, mostly a contrast of blues and peachy pinks with more primary colors coming into play for long shots of the town and its shipping traffic. Once into its final third, however, the film begins to ramble a bit. There's a segue to Koichi and a bunch of boats too close to the moon (the balance of nature has been upset or some such). Ponyo and Sosuke come across a family with a baby in a canoe, then see the townspeople heading towards the hotel stating that they'll return for the seniors (don't the Japanese revere their elders?). The giant sea goddess, who resembles a bigger and more buxom version of "Pinocchio's" Blue Fairy, has a confab with Lisa at the senior center, encased within a giant bubble where seniors Toki, Noriko (voice of Betty White) and Yoshie (voice of Cloris Leachman) frolic without walkers or wheelchairs. We're left to wonder why Sosuke would pledge to love Ponyo because, if truth be told, she's much cuter as a fish. Miyazaki has also fashioned an 'in between' version of Ponyo that is downright creepy - her hands and feet look like chicken feet, her facial features bloated (and the image is familiar, as well, from prior films). Miyazaki's magical elements often seem left of center, not rooted deeply enough within the story, and that oddity is prevalent here. "Ponyo" is at its most magical when it observes the every day.