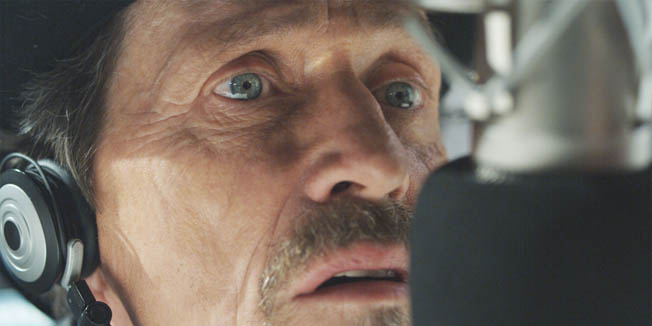 Grant Mazzy (Stephen McHattie, "The Fountain," "Watchmen") used to be a big city shock jock, but is now relegated to reading early a.m. small town news on CLSY, a station run from a church basement. Heading in one dark morning in a ferocious storm, Mazzy has a weird encounter with a woman wearing a suit and jabbering nonsense who wanders back into the darkness. Once he starts broadcasting, asking listeners if he should have called 911, his producer, Sydney (Lisa Houle), begins to feed him really strange stories that she cannot back up on the wire. It appears as if something very wrong is happening to the people of "Pontypool."

Canadian director Bruce McDonald ("Highway 61") grappled with domestic horror in his last film, "The Tracey Fragments," but jumps into pure "Twilight Zone" territory with "Pontypool," a zombie flick with a neat twist - those who provide the news are the ones in the dark. Adapted from his own book "Pontypool Changes Everything," writer Tony Burgess poses some interesting ethical issues on the responsibility of the media, but like many a Stephen King novel ("Insomnia" comes to mind), solid characters and a great build are undone by a silly underlying premise. Working with a stripped bare budget (one set, HD shooting and five main characters one of whom is never seen), McDonald wrings everything he can from the material but does not provide subtext needed to turn around an ill-conceived idea. Clearly modeled on Don Imus, with his black cowboy hat and urge to stir controversy, Mazzy tests his producer to the limits. When the first reports come in of a hostage situation at local fishing huts, he throws out the possibility that all involved, including the police, are probably drunk. He's taken down a peg when Syd informs him that one of those cops is indeed a struggling alcoholic, but also her brother-in-law. Technician Laurel Ann (Georgina Reilly), Pontypool's own 'homecoming hero' after a stint in Afghanistan, is a stabilizing influence between the two. When they hear from their 'Sunshine Copter' reporter Ken (Rick Roberts, "Man of the Year"), who Maz really believes is flying through the storm, they begin to hear more serious reports of a mob swarming the practice of Dr. Mendez (Hrant Alianak), a physician recently accused of writing bogus prescriptions. When Ken begins panicking over the mayhem he's witnessing, Sydney forces Maz to go to his interview with local singing group Lawrence and the Arabians so that she can confirm via wire, as she did with the first story. She can't and one of the Arabians begins to act very strangely (the whole act is comically strange, but this girl sounds like a skipping LP). Ken's stories get increasingly horrific and Radio 660's airwaves are interrupted by an announcement in French, that, when translated on-air by Mazzy (the last sentence being 'do not translate this'), take them into surreal territory. McDonald initially employs swirling cameras, much like Oliver Stone's "Talk Radio," within his radio studio (built in the basement of an actual Toronto church), but as the tension mounts, his camera becomes more static, lingering on the shocked expressions of Mazzy and Sydney. McHattie's quite good as the preening DJ who, despite a propensity for entertainment and ratings, is the one who fights against the fear impulse and deliver actual news. It is stretching things to have one believe an urban DJ wouldn't know that their 'Sunshine Copter' is fakery (news media 'creating' a bit of their own news). And while Houle and Reilly, the latter of whom becomes infected within the studio, provide good foils for McHattie's Mazzie, Rick Roberts vocal performance as Ken the copter guy is really noteworthy. He is our eyes on the scene, and the terror he relates is chilling. The third act appearance of Dr. Mendez, who gets in through a window when the station is already under siege, signals the beginning of the end for the film though. It is his hypothesis, built through observation of what he's already seen and what happens to Laurel Ann, that is just plain silly. Furthermore, once the characters know what they shouldn't do, they continue to do so whether for reasons valid or not. That 'Kill is kiss' becomes a vital phrase and on Valentine's Day no less, adds up to absolutely nothing. "Pontypool" could have been saved with an injection of a little more logic, a little more political subtext. Instead, it shows McDonald in good genre form with an able cast undone by a weak bit of sci fi conceptualizing. An opening credit prologue featuring a 'talking' radio signal is effectively creepy, if overlong.

It is just another routine day for a small, rural Canadian town. A huge snowstorm is upon the townsfolk and, for tiny Radio 660 CLSY, another boring list of school cancellations to be broadcast. Fallen-from-grace airways shock jock Grant Mazzy (Stephen McHattie) is now the two-bit station’s morning host and he wants more than reading the news and weather. He gets his wish when some of the locals start speaking in strange tongues and exhibiting alarming instances of violence. When the station and town are cut off from contact with the outside world, things turn very bad for “Pontypool.” Canadian filmmaker Bruce McDonald brings us a homegrown horror-thriller that uses the English language as the catalyst for its chiller story and basis of the dark humor that Canucks and friends of Canuck, like me, will enjoy. The premise is imaginative and the simple, low budget production utilizes its church basement (home of Radio 660) locale to help build a feeling of claustrophobia and siege that the helmer uses effectively. The crisis descending upon remote Pontypool, Ontario begins while Grant is driving through the blizzard to do his morning wakeup program. He pulls off the road to use his cell phone when, suddenly, a well-dressed woman appears and disappears just as quickly. Strange, but Grant soon forgets the incident when he arrives at the station. He ignores his producer, Sydney Blair (Lisa Houle), when she begins getting reports of epidemic-like behavior by members of the town’s populace. The station is cut off from everyone and the only accurate reports they have are from the station’s “eye in the sky,” Ken Loney (voice of Rick Roberts), their helicopter reporter (who is really just sitting atop a hill in his car looking down on the town). “Pontypool” is a zombie movie that does not really have any zombies in it, which may be a turn off for fans of that genre. However, the clever scripting by the source material’s writer, novelist Tony Burgess, and the tiny but solid ensemble cast make this an entertaining movie, especially for our friends living north of the 49th parallel.