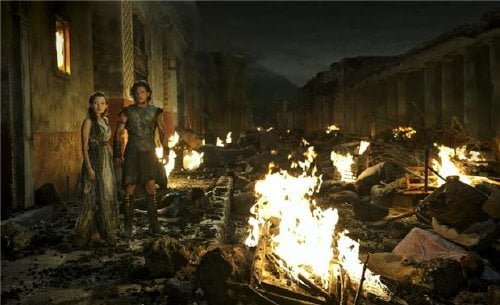 Wealthy merchant's daughter Cassia (Emily Browning, "Sucker Punch") has had enough of Rome but on her return home she's shocked to find the man she's running from, Senator Corvus (Kiefer Sutherland), is being wooed by her merchant father Severus (Jared Harris, 'Mad Men's' Lane Pryce, "Lincoln") to invest in their city. Along the way an enslaved gladiator known as The Celt (Kit Harington, HBO's 'Game of Thrones') has caught her eye because of his way with horses. When the Celt also recognizes Corvus as the man who slaughtered his family, the stage has been set for a showdown in 79 A.D. "Pompeii."

With a script written by "Batman Forever's" Janet Scott & Lee Batchler, 'Downton Abbey's' Julian Fellowes and Michael Robert Johnson (2009's "Sherlock Holmes"), one should not expect to learn much about life in Pompeii in "Pompeii." "Resident Evil" director Paul W.S. Anderson delivers plenty of CGI destruction, but this is a gladiator movie encased within a highly coincidental love triangle wrapped up with a final, laughably inaccurate image that recalls the finale of "Edward Scissorhands." A prologue establishes The Celt as a young boy who plays dead during the Celtic Horse Tribe Rebellion in Great Britain. The lone survivor is captured, his natural talents exploited by Graecus (Joe Pingue, "Antiviral," "Pacific Rim"), who brings him to Pompeii to fight Atticus (Adewale Akinnuoye-Agbaje, "Thor: The Dark World"), the African gladiator who's been promised his freedom should he survive this one last battle. Meanwhile Cassia's outraged to find the Romans in Pompeii and Corvus is intent on making her his wife. When her stablehand takes her beloved white horse out to be exercised, he falls victim to the beginnings of Vesuvius's rumblings and the horse returns riderless and frantic. Cassia calls upon The Celt to calm the horse and the two take an impetuous ride for the hills. Corvus's soldiers return them and Cassia begs for The Celt's life, so Corvus shows his 'mercy' by sentencing fifteen lashes. The next day is show time in the old Coliseum. "Pompeii" is a mix of decent gladiator story, Roman politics both subtle and silly and the old forbidden slave lust genre (made suitable for teenaged girls with the chaste lovers' shared appreciation of horses and hatred of Rome). We've seen the 'gladiatorial opponents team up' story before, but Harington and Akinnuoye-Agbaje have more convincing chemistry than the love angle - they're unevenly matched in size but The Celt's (who eventually tells Atticus his name is Milo as a sign of trust) swiftness is a challenge to Atticus's sheer physicality. Milo tries to tell Atticus that he can't trust the Romans to give him his freedom and when that becomes abundantly clear when they're led into the colosseum, where Severus aims to please Corvus with an ill matched recreation of his greatest military achievement (that Horse rebellion), the duo's concerted efforts are entertaining in all the wrong ways. Cassia gives a thumbs up, painting her enraged fiance into a political corner. (It simply must be noted that those fifteen lashes given to Milo the night before are all but forgotten, flayed skin reflected 24 hours later as mere red streaks with no physical repercussions to the gladiator's ability.) Anderson, who has kept reminding his audience that disaster looms (an earthquake, cracks in the colosseum basement ceiling, overhead shots of Vesuvius's boiling, burping lava) chooses this moment for the big blow, using the destruction of Pompeii as a backdrop for Milo to save Cassia from Corvus (it's like "Gone with the Wind's" burning of Atlanta with a lot more CGI and a lot less credibility). Atticus, who sends Milo after Cassia with a promise to meet in the harbor, actually has the more interesting adventure, racing towards the port just before a tsunami hits. While we're given a believable reason why Milo and Cassia would return to the crumpled colosseum, the only reason for Corvus to be there is to twirl his virtual moustache (Sutherland camps, using some concept of an aristocratic lisp to ill effect). As flaming boulders and clouds of ash descend upon the city, Milo chases Corvus's chariot on Cassia's white horse (or one that looks exactly like it seeing as how they didn't think to leave her flaming villa on it). Reasonable attempts have been made to make Pompeii look as it was before it was entombed, although a reliance on overhead shots give one the impression of a museum video recreation. Vesuvius itself looms a lot closer. But while "Pompeii" isn't as ludicrous a cheese fest as, say "2012," Anderson completely undercuts anything positive about his film with his big romantic ending flourish. Those bodies one sees at Pompeii and the museums they've been moved to are actually plaster casts of the spaces left when victims were entombed by lava - apparently incineration isn't sexy and Hollywood needs its money shot.