Poly Styrene: I Am a Cliché 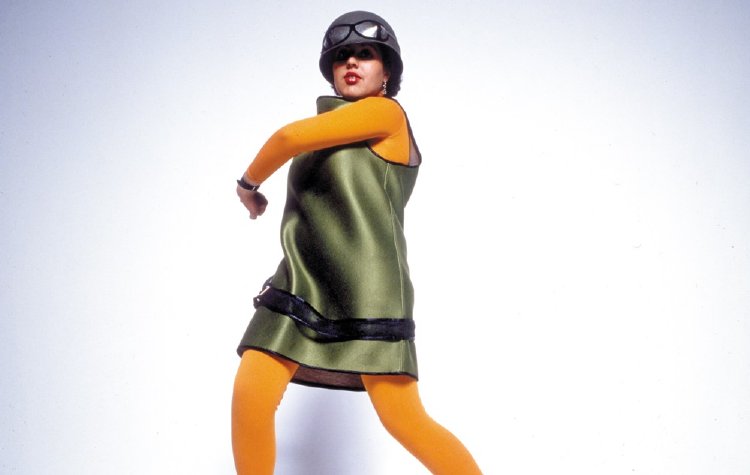 A petite Anglo-Somali woman fronting a punk band was something pretty unique when punk rock took hold in England in the mid-70’s, but it also took considerable toll on the X-Ray Spex frontwoman, not only on her but on her daughter.  After her mother’s death from cancer in 2011, Celeste Bell takes stock of an influential career, co-directing (with Paul Sng) “Poly Styrene: I Am a Cliché.”

‘My mother was a punk rock icon,’ Celeste begins, recalling the ‘blur’ of her mom’s funeral and the stress of meeting a lot of people she didn’t know who knew Poly Styrene, but not necessarily Marion Elliott-Said.  Celeste was just a toddler when her mum was really famous, and didn’t feel up to becoming the curator of her mother’s career upon her death.  But five years later she began going through Poly’s prodigious archive and now she has gifted us with a comprehensive look at both Poly and Marion.

The woman born in 1957 to a single white legal secretary and Somali immigrant was regarded at the time as a ‘half-caste,’ an outsider who would be in the position of condemning one parent by hanging with the race of the other, issues she wrote about in poems.  She was also an ahead-of-her-time fashionista, repurposing old clothes and mixing them with the synthetics that fascinated her (one interview subject recalls seeing her for the first time dressed in lime green and orange plastic, sitting by the market stall she ran near Vivienne Westwood’s shop on King’s Road).

Ruth Negga (“Loving,” “Passing”) reads Marion’s diary entries, one from her 19th birthday recounting a trip to Hastings Pier and an early Sex Pistols show.  She was so inspired, she placed an ad for ‘young punx who want to stick it together’ and X-Ray Spex was born.  As their frontwoman, Poly maintained her individual style, favoring a red military jacket and Army cap or plastic shift dresses and not giving a care about the braces on her teeth.  Her vocals were commanding, her lyrics strong, her stage presence exhilarating and her confidence assured.

Then the seminal 1977 single ‘Oh Bondage, Up Yours!’ catapulted her into fame and all its attendant drawbacks.  The woman who’d never had a problem with her own image became insecure as journalists referred to her as odd looking and overweight (she was outraged when EMI, her record company, slimmed down her image on their album cover).  Then she and her band went to New York City.

While it is quite thrilling to hear that the likes of The Jam and Debbie Harry were in CBGB’s front row for Poly and how chuffed Sonic Youth’s Thurston Moore was to be handed the mike for the ‘Up Yours!’ part of ‘Oh Bondage,’ Poly reacted poorly to the constant idolization, heavy drug scene and the pressures the record industry puts on emerging artists.  New York was very different from London with its predominance of television channels and plastics and while some of her band members embraced its hedonism, she ended up leaving her band having, as she said, ‘lost her innocence and her mind.’  Back home, she was in and out of mental hospitals, constantly sedated, her bipolar disease misdiagnosed as schizophrenia.  Oh, bondage, indeed.

Celeste’s memories of her mum include feeling jealous of her absorption in song writing, moving into the Hare Krishna manor and frequent shopping excursions (despite her anti-consumerism songs).  The contradictions continued, Celeste opining that the woman regarded as a strong feminist actually had no political ideology and would have loved to be a stay-at-home wife and mother.  Her romantic life was a series of disappointments.  She married Celeste’s father Adrian too young and thought her older manager, Falcon Stuart, both the love of her life and the ruination of it.

Poly’s daughter has done her proud with an intimate, yet all-encompassing portrait of an extremely talented and complex woman.  “Poly Styrene: I Am a Cliché” is yet another in a string of fabulously engaging rock docs.

As I watched “Poly Styrene: I Am a Cliché,” of whom I thought I knew nothing, I realized that I actually was familiar with her music. Well, one song anyway, “Oh Bondage, Up Yours!” which was used in Alex Cox’s 1986 film, “Sid and Nancy.”

Co-director/co-writer Celeste Bell (with Paul Sng), who happens to be Poly’s (nee Marion Elliot) daughter and curator of Poly’s archive, made the film to come to terms with herself and her late mother. You get a neglected child’s view of her famous (infamous?) mom who was on the cutting edge of the punk music movement in the 1970s and 80s but not much of a mom.

Bell, Sng and company have collected and deftly edited copious amounts of material about Poly, in particular, and the punk movement, in general. Bell narrates the film and, unfortunately, her monotone vocal delivery makes things a bit flat, but that is a minor distraction.

We also get a solidly done and informative biography of Poly, her life, her fears and pleasures and how they shaped her existence. Daughter Celeste tells her mom’s story with deft skill and, during the course of the telling, comes to grips with her mom, her fame and how hard it was growing up in her shadows.